Ideologies similar to those of the 'Indian Mujahideen' or criminals who masquerade as leaders should not have any space in Gandhi's India, in Azad's India. The time has come to work towards the prevention of disorder and catastrophe, and not merely t 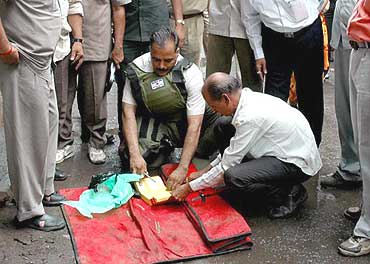 Lately, the spate of violence in India that has led to the loss of (and harm to) innocent lives in Bangalore and Ahmedabad is depressing. Such acts of terror can only be the handiwork of sick minds with perverted ideologies.

Even as the debate as to how to tackle terrorism in India rages on, I was delighted to read Mr Ajai Sahni's argument that "the gravest threat to India's security is not Pakistan, not the Inter Services Intelligence, not terrorism, but the limitless acts of omission, the venality and the ineptitude of the political and administrative executive, and the complete absence of accountability in the top echelons of government."

But I was disappointed to read his entire article. Certainly, India's legal system, the police and the political executives have left much to be desired of them, and in a way, failed all Indians. But what Mr Sahni refers to is the failure on the management front -- management of terrorism/crime.

The management aspect of terrorism in India simply addresses the issues at a very superficial level. Management of terrorism may be more successful at one point of time-space and a failure at the other -- but effective, or otherwise, management cannot transform structures in the society that make poor Muslims in India easy cannon fodder for international terrorist groups. What we need to tackle, instead, is the problem at its roots.

How different is India from a typical failed state? Political leaders, who carry out chariot processions spreading hate, leaving behind a trail of riots, leading, engineering and inciting mobs to demolish mosques, roam free in our society. Political leaders who lead and facilitate genocide/massacre continue to remain in power.

To be a successful state, the rule of law should prevail and criminals, whether they engineer riots or kill innocent people by carrying out bomb blasts, should be treated as criminals. Even as Serbian leaders/criminals are being tried in the international courts and put behind bars, for similar crimes they committed in the past, criminals in India remain above the law. Are we living in a civilized society?

When certain groups of criminals remain above the law, it creates a sense of hopelessness amongst the not so equal in the society -- in this case, the Indian Muslims. It is not a justification and it should not be taken as condoning, even obliquely, these recent blasts or indeed any other terrorist act, but it is this sense of hopelessness and despair that creates ideal grounds for misguided, but homegrown terrorists who want to take the law into their own hand.

In addition, I do not want to categorize Hindus or Muslims in India as homogenous categories -- both these communities have had their share of lunatics, as well as individuals with character and integrity. In fact, Mahatma Gandhi, a devout Hindu himself, taught us all the best lessons of secularism and non-violence, as did Maulana Azad, a devout Muslim. Ideologies similar to those of the ‘Indian Mujahideen’ or criminals who masquerade as leaders should not have any space in Gandhi’s India, in Azad’s India.

Terrorists do not deserve any sympathy because they hold innocent people hostage to fear and violence and cause death and destruction of those who probably are as helpless as those whom they claim to represent. Who or what gives them the right to be representatives of the community they claim to represent? But then, it is high time that we take stock of this grave problem that confronts our county, and in turn, confront it at its root.

The best means to overcome the circle of violence that has been unleashed, is to ensure a just society, a society where all criminals, irrespective of religion and political stature, are held accountable for their crimes. To conclude, I would like to quote Giorgio Agamben, a noted philosopher: "It is not that democracies should cease to defend themselves, but the defence of democracy demands today a change of political paradigms and not a world civil war which is just the institutionalisation of terror. Maybe the time has come to work towards the prevention of disorder and catastrophe, and not merely towards their control."

Waquar Ahmed, an Indian, is a professor at Mount Holyoke College in South Hadley, Massachusetts, USA

'We Did Not Feel That The Story Was Complete'