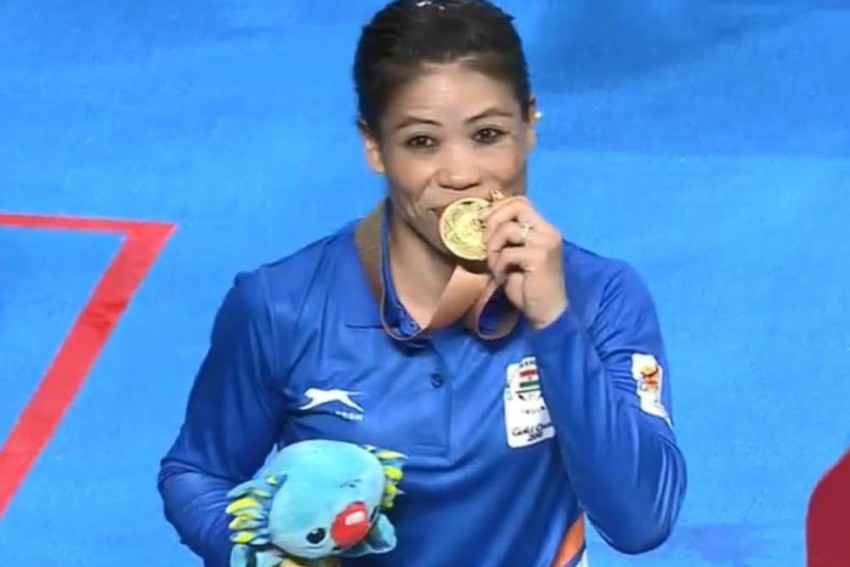 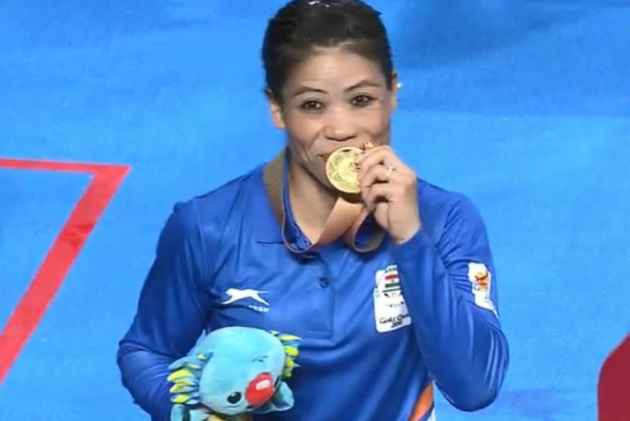 The legend of M C Mary Kom (48kg) grew larger as she became the first Indian woman boxer to claim a Commonwealth Games gold, joined by Gaurav Solanki (52kg) in the top-finishers' group after the first set of finals here today.

The star of the day was without a shred of doubt Mary Kom -- a 35-year-old five-time world champion and Olympic bronze-medallist.

She was competing in her debut Commonwealth Games, also perhaps her last, and made it a memorable one with yet another dominating performance to claim an unanimous verdict of 5-0 over Northern Ireland's Kristina O'Hara in the final.

"I am so glad to have made history again, it is a special feeling to win something that is a milestone medal. I am just so glad," a beaming Mary Kom said after the victory.

"This medal and each one of my medals is special to me because I have worked equally hard for them. And I will continue to do so till the time my body is fit," she added.

The 22-year-old O'Hara, who works as a carer at a nursing home when she is not trading punches in the ring, lacked the finesse to counter the experienced Indian and failed to take advantage of her longer reach.

Mary Kom struck her at will, her right hooks being especially telling. By the second round, Mary Kom seemed to be thoroughly enjoying herself in the ring against her timid rival.

In the men's competition, Solanki provided the golden touch, pulling it off 4-1 over Northern Ireland's Brendan Irvine. The Indian lost the third round but did just enough in the first two to walk away with a gold medal on debut at the Games.

"Today I'm dedicating my medal to my mum, but I want to represent India at the (Tokyo) 2020 Olympics and to be there when they raise the Indian flag," the 22-year-old said looking ahead.

However, luck was not on side of either Amit or Manish, both of whom went down in split verdicts.

"I am disappointed with the result. I thought it was 50-50 bout," Amit said after his loss.

Manish, on the other hand, lost 2-3 to local favourite Harry Garside, again on a split decision. Both the boxers gave their all in the bouts but could not get the judges' nod.