While the ICMR is investigating if 2-Deoxy-d-Glucose (2-DG) is useful in the treatment of Covid-19, the DCGI has already granted it emergency use authorization (EUA). 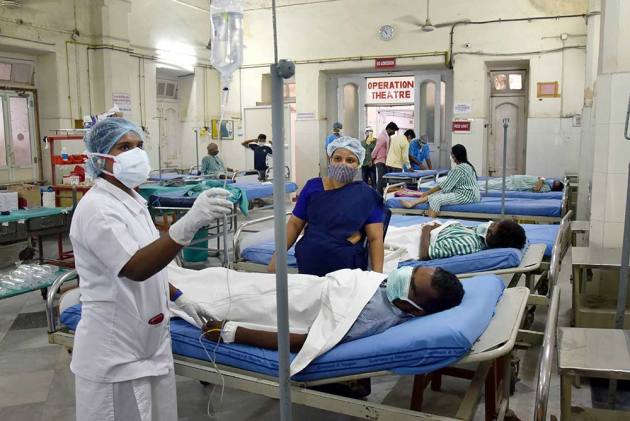 India’s premier research body, the Indian Council of Medical Research (ICMR) is investigating if 2-Deoxy-d-Glucose (2-DG) is useful in the treatment of Covid-19 patients.

“If we find in our scientific investigation that it is valid for Covid-19 treatment, we will include it in our treatment protocol,” Dr Samiran Panda, Head, Epidemiology and Communicable Diseases, ICMR told Outlook.

Interestingly, the Health Ministry has already called the drug ‘a gamechanger for Covid-19 treatment’ and the Drug Controller General of India (DCGI) has granted it emergency use authorization (EUA).

Why Are Doctors Prescribing 2-DG To Covid Patients When The Drug Is Yet To Be Launched?

The question is, “what purpose does the ICMR’s treatment protocol serve?”

A case in point is antiviral medicine Fabiflu which got DCGI’s nod for emergency use in India in June last year.

However, the ICMR didn’t include it in its treatment protocol as it didn’t find it worthwhile for treating Covid-19.

Despite not getting approval from ICMR, Fabiflu has been sold and is being used more than any other drug in the ICMR’s selection of medicines in the protocol.

During the second wave, it was black-marketed at double or triple its original price of about Rs 1200 per strip of 17 tablets.

There is no evidence-based clinical data to suggest if it is useful in Covid treatment.

There are other drugs that either have never made it to the treatment protocol or have been excluded based on the evidential study conducted later on.

However, all of them are still in use and prescribed by doctors across the country.

“It is the propaganda and hype around a drug that matters more than its scientific worth,” a government doctor on Covid duty in AIIMS said.

He added, “2-DG has already got that hype as Health Minister and Defence Minister has launched it and the government of India has endorsed it as a game-changer drug.”

Dr Ishwar Gilada, India's first doctor in HIV Care and Infectious Diseases expert, says that Covid patients are taken for a ride by doctors as they are recommending drugs from both old and revised treatment protocols.

“An asymptomatic patient shared a doctor’s prescription in which she was asked to take not one or two but 12 medicines such as Ivermectin, Fabiflu, Tab Doxy, Remdesivir to name a few. Some of the medicines like Doxy were already dropped from the ICMR’s treatment protocol,” Dr Gilada said.

He says that EUA means the data of every patient who consumes these medicines are being maintained and analysed so that after a certain period of time its safety and efficacy can be assessed.

“Such drugs are directly supplied to hospitals and they are not available at the chemist shop. Unfortunately, DCGI has failed to keep a check on its over-the-counter sale. Even hospitals are asking patients to buy from the market,” he said adding that DCGI has no data on the sale of Remdesivir in the country as it was sold in the black market during the peak of second wave of Coronavirus.

A section of health experts, who defends ICMR’s treatment protocol, says that the drug controller approves a drug for emergency use and the ICMR conducts a more detailed and in-depth study to find out its usefulness in the long run.

However, they agree that there is a need for the two bodies to work in tandem.

“If the drug controller approves a drug under emergency use and after a few months of investigational study, the ICMR finds that the drug is not useful, the approval should be withdrawn,” Narinder Kumar Mehra, the ICMR emeritus scientist (Hon) and former Dean of the All India Institute of Medical Sciences said.

“In other words, I suggest an outer time limit for every EUA of a drug which can be extended depending on the usefulness of the medicine based on the study of available data. Any Medicine cannot be in use for an indefinite period of time under emergency use,” Dr Mehra said.

Health care experts say that the anecdotal experience of individual doctors cannot be the basis for a drug to remain in use forever.

They say that despite all studies that suggest Remdesivir a useless drug for Covid-19 treatment, ICMR hasn’t removed it from its protocol.

“Even if ICMR removes it from its protocol, it makes no sense unless drug controller withdraws its approval,” a senior government epidemiologist said.

Many health experts point out the waste of finance and human resources on carrying out scientific studies for including or excluding drugs from treatment protocol if that doesn't serve any purpose.