With no clarity yet on whether Rahul Gandhi has agreed to stay on as Congress president, the party has decided to take a bottom-up approach at analysing the organisational failures that led to its Lok Sabha debacle 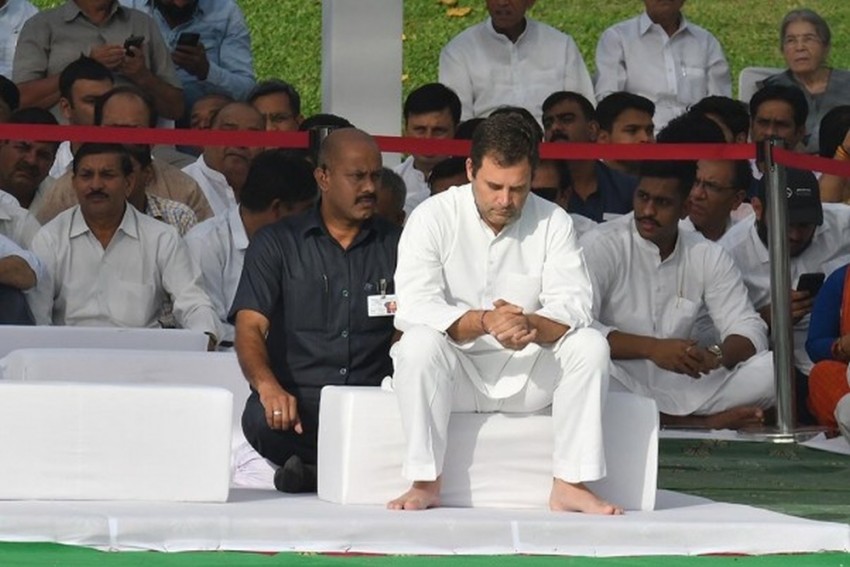 The Congress is making efforts to take stock of organisational failures that led to party's poll debacle. But the meeting are not turning out as party leaders would have hoped
PTI File Photo
Puneet Nicholas Yadav June 11, 2019 00:00 IST Congress Post-Mortem Of Lok Sabha Poll Debacle Turns Into Slanging Matches 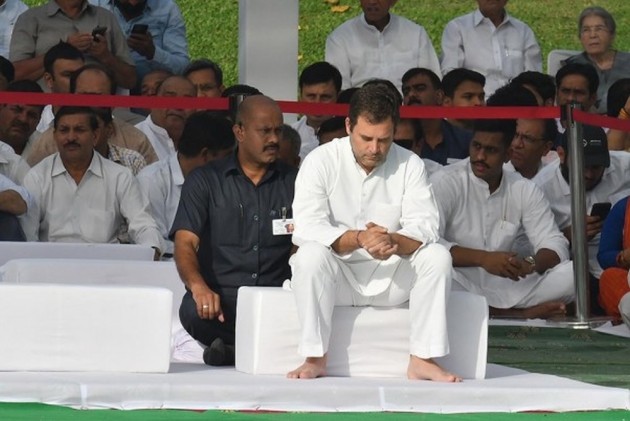 A fortnight after it was handed a second consecutive humiliating defeat by the Bharatiya Janata Party (BJP) in Lok Sabha elections, the Congress party seems to finally be coming out of its shock-induced inertia to examine why its dwindling poll fortunes are showing no signs of reversal.

With no clarity yet on whether Rahul Gandhi has agreed to stay on as Congress president or is firm on making way for a replacement, the Grand Old Party, it appears, has decided to take a bottom-up approach at analysing the organisational failures that led to its poll debacle, with consultations underway in its state units.

Sources have told Outlook that AICC general secretaries in-charge of various states have begun convening meetings with state unit chiefs, legislative party leaders and Congress candidates as the first step to understand why the party failed to win a single seat across 18 states and Union territories and was reduced to single-digits in the rest of the country, with the exception of Kerala where it won 15 of the 20 Lok Sabha constituencies.

Delhi, sources say, the first off the block in starting the consultation process. Delhi Congress chief Sheila Dikshit and AICC in-charge P.C. Chacko have already held several rounds of discussions with party colleagues and candidates while talks with local leaders and booth level workers are being carried out by different working presidents.

In Haryana, where the party lost on all 10 seats, the consultation process has, however, triggered a fresh round of factional feuds. Sources said that a recent meeting of party’s candidates called by senior leader and party’s Haryana in-charge Ghulam Nabi Azad, quickly turned into a slanging match between former chief minister Bhupinder Hooda, state unit chief Ashok Tanwar and the party's Karnal candidate, Kuldeep Sharma. Azad’s appeals for a civilized discussion went unheeded and he was forced to end the meeting abruptly.

Like in Haryana, sources said, the brainstorming sessions have not turned out to be a cordial affair in other states too.

In Punjab, the running feud between chief minister Captain Amarinder Singh and his cabinet colleague Navjot Singh Sidhu has refused to end. Singh reshuffled his cabinet last week and took away key portfolios from Sidhu, apparently as "punishment" for his “insubordination that has damaged the party”. The irrepressible cricketer-turned-politician met Rahul Gandhi in Delhi on Sunday to apprise him of the political situation in Punjab. Sources said Rahul’s decision to meet Sidhu, in the presence of Priyanka Gandhi Vadra and Ahmed Patel, at a time when he had shut his doors to most senior leaders has not gone down too well with Singh.

In Madhya Pradesh too, AICC general secretary in-charge Deepak Babaria has come down for heavy criticism for his handling of organisational issues. Loyalists of Jyotiraditya Scindia, who lost his family seat of Guna in the polls, have demanded that he be immediately appointed as the state Congress chief by replacing Kamal Nath. Nath is being singled out by several party leaders for the rout in MP amid allegations that he spent most of his time campaigning for his son Nakul Nath in Chhindwara, the only constituency where the Congress won in MP this time round. Rahul had expressed his reservations about Nath’s insistence on fielding his son in the elections and, sources say, he refused to grant the father-son duo an audience when they were in Delhi on June 9. The MP chief minister then went to meet Prime Minister Narendra Modi, seeking “blessings” for Nakul Nath who will make his Lok Sabha debut on June 17.

The situation is not any different in Rajasthan where chief minister Ashok Gehlot and his deputy, Sachin Pilot, who is also the state Congress president, have been publicly blaming each other for the party’s failure to win a single of the state’s 25 Lok Sabha seats. Gehlot’s son Vaibhav too lost in Jodhpur and the chief minister now wants Pilot to take responsibility for the defeat. Pilot, who did a credible job at rebuilding the party in the state over the past five years, has been sulking at being overlooked for the chief minister’s role. He has already started a statewide public outreach tour, hoping to reconnect with the state’s masses.

Rajni Patil, the ACC in-charge of Himachal Pradesh is currently on a visit to Shimla. She has held consultations with former chief minister Virbhadra Singh, party veteran Vidya Stokes, all four defeated party candidates and members of the party’s women wing.

Sources say that state in-charges and PCC chiefs have been asked to make detailed reports on the reasons for the poll losses after the consultation process and also suggest ways in which the organization can be overhauled to face the insurmountable electoral challenges that lie ahead. The Congress Working Committee – the party’s apex decision-making body – had authorised Rahul Gandhi last month to “completely restructure” the party. Sources say these reports will be taken into account while implementing an organizational reshuffle that is expected to take place before August.

However, with its leaders still unable to rise above personal feuds and ego battles despite staring at political obscurity, can the party really re-invent itself?