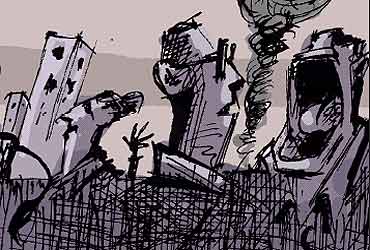 I left London on transfer for Delhi in the first week of September. London was on the cusp of autumn, at the end of its (mostly) glorious summer. Delhi was about to finish with its scorching summer, and on the anvil of its delightful winter. I was told the monsoons had come and gone. In London it rains incessantly, but rarely with passion. Looking out of my window on another wet, grey day, my mind would often think of the verandah in my home in Delhi, where holding a cup of tea, I would watch the skies come pouring down to the accompaniment of thunder and lightning. Fortunately, soon after I returned I could do just that.

The first thing you notice when you reach Delhi is people. In England, as in many places in the West, you can drive for miles and not see a soul. Entire villages appear to be deserted, the roads lonely and people-less. But, as you emerge from Indira Gandhi International Airport, the sheer swell of humanity strikes you afresh. The second thing you notice is the noise. I have a theory that sound gets amplified in the tropics: people shout, horns blare, shoes thump, dogs yelp and birds screech, a perfectly happy welcoming symphony.

My only problem is with our propensity to press on the horn. Vatsyayana would be happy to learn that, for entirely the wrong
reasons, we have—finally and loudly—become horny. There is little doubt that Delhi is changing fast. You notice more cars, more mobiles, more flyovers and  more ads for more straightaway. And yet, I am amazed how amidst this change so much remains the same. The monkeys are still there in South Block, refusing to not be associated with the making of foreign policy. The  Ministry of External Affairs must be the only organisation of its kind that has two langoors officially on its payroll to chase out the monkeys.

India really has no parallels. We are a sui generic people, like that only. I loved my daily morning walks in Hyde Park, but I am happy to be back in Nehru Park, where the authorities ban (like Hyde Park, but, I suspect, just as unsuccessfully) fornication in the park. Unlike Hyde Park, but entirely in keeping with the schizophrenic reality of India, Nehru Park also bans bathing, cooking and washing of clothes.

The other day, crossing the Yamuna, I saw the most glorious sunset frame what is arguably Delhi’s most ugly building: the DDA HQ. The good and the ugly mix freely in this city, but October is upon us, and as the mornings and evenings suddenly have the intoxicating whiff of winter, I can see only the good. I read my morning papers sitting in my aangan. A cool breeze sways the madhu malti creeper, and I am content, happy to be back home.

This piece appeared in the October issue of Delhi City Limits.