'I would take some of the responsibility but I don't think blame could be apportioned on any single individual. India haven't won a major series abroad since 1995, so there has to be a reason for it.' 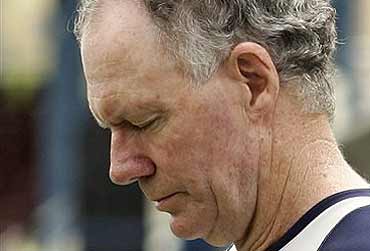 outlookindia.com
-0001-11-30T00:00:00+05:53
Under fire after India's disastrous World Cup performance which he described as a "collective failure", coach Greg Chappell stonewalled questions about his future with Indian cricket, saying that he was answerable only to the Board.

"I am not employed by you people (media). I am employed by the BCCI," Chappell said after the team's 69-run loss to Sri Lanka in Trinidad on Friday.

"Obviously I will have to face up to them and give them a report, and give them some indications of what I think. I don't think this is the forum for me to discuss it," he said.

The loss to Sri Lanka meant India finished the group phase with the lone win against lowly Bermuda and only an highly improbable win by the minnows over Bangladesh can see them through to the next stage of the quadrennial event.

Refusing to pinpoint any individual for the team's World Cup debacle, Chappell said "a serious introspection" was needed to correct the team's overseas record.

"I would take some of the responsibility but I don't think blame could be apportioned on any single individual. It's a collective responsibility," said the coach.

"India haven't won a major series abroad since 1995, so there has to be a reason for it," the 58-year-old coach said.

Chappell was clearly rattled by the barrage of questions hurled at him at the post-match press conference.

Asked if the process he had constantly talked about since taking over as India's coach had not worked or whether it was wasted on the wrong people, the former Australian captain retorted: "I think that is an inflammatory question."

Is that all he had to say?, a reporter persisted.

Chappell's contract with the Indian team ends after the World Cup.

Asked if he was prepared to continue working with the Indian team after the event, he said, "it is not my decision".

Will he accept if an offer to continue was made to him?

"I have not been made such an offer. I will answer that when the offer is made."

Chappell expressed confidence that a "system was in place to look after his security" once he returns to India with the rest of the team members.

"Obviously in terms of what has happened in recent times it's a concern but I know the system is in place to take care of it," he said.

Chappell understood that millions of fans back home would be disappointed with India's below par performance but hoped they would be mature enough to have a good perspective.

"There could be many of them who would be angry. It's a huge disappointment for them. But hopefully they would realize it's just a game. You need to look at a number of things to get a true perspective."