This is not a review column, and furthermore it's a column specifically prohibited from gushing, so why was our cynic's cynic flood-eyed and on the verge of howling?

There was a moment, in the late ’70s, when the world opened up for those of us who were then in our late teens: early in ’78, Bombay had its first Jazz Yatra, shortly followed by a similar festival in Calcutta. Suddenly, life had a different taste. Some of us had hip-flasks full of Old Monk, some had girlfriends, some older types had both. Most of us had neither but we were real close, close enough at least to maaro a swig of the booze or a toke of the grass. But all of this was peripheral; main thing was, here we were, sitting or standing in open, night air, listening to some of the best jazz musicians in the world, shouting in happy recognition of numbers we knew by heart or bopping in complete surprise to stuff we had never heard before. 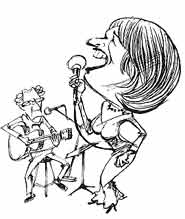 The fact is, this top class visiting-firangi electricity has mostly been missing in early Millennium Delhi. Even as the quality of our home-grown acts has got better and better, embassies and cultural wings have carted over a hell of a lot of second-rate acts for the city’s delectation. And, as for the straight-ahead big name rock acts, for every Sting, Floyd or Stones concert in Bangalore, for every ghastly Michael Jackson toadying up to Bal T in Bombay, Delhi has again had Bryan Adams and the like. Even as apna bands like Indian Ocean kick up a storm on the South Bank or Trafalgar Square, we have been getting pretty watered-down crap in return.

All this is brought home even more sharply when you actually walk into one of these import-concerts, not expecting much, and get completely blown away. As a musical duo, French-Canadians Carmen and David have a simple set-up: David sits nerdily on a stool and plays guitar while the vivacious Carmen sings. The material ranges from old jazz standards to French chanson to jazzified versions of Beatles’ biggies. So far, so straightforward. What is fantastic, though, is what these two manage to create between the guitar and the voice.

First, the guitar, which often stays well in the background, supporting the voice, chameleoning between rhythm and bass and only occasionally coming out to take superb solos. Across the concert, David Jaques laid down a bravura history of the modern guitar from Charlie Christian to Bossa Nova to rock, and all of it with no fanfare, no showmanship and really genuine feeling. On top of this, below and around this, was Carmen Genest, with what in this impoverished language can only be called her ‘voice’.

This is not a review column, and furthermore it’s a column specifically prohibited from gushing, so I’ll only say the following: during one Edith Piaf number, Padam Padam, Carmen Genest had this cynic’s cynic flood-eyed and on the verge of howling. I won’t say the Alliance Francaise and/or the Canadians have completely made up for all the dross we normally get in this town, but for that one evening I will forgive a lot.