Can An LoC Deal Be Sold?

As a proposal Kashmir: A Framework For Peace is fine, but any solution needs more than a passing nod in the direction of the status-quo. 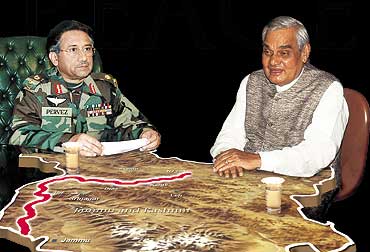 outlookindia.com
-0001-11-30T00:00:00+05:53
It is splendid to watch leaders and governments when they become cautious friends. Ever since May 23, when the Indian government ended its cease-fire, only to offer the tantalising prospect of direct Indo-Pak talks, an air of optimism has returned to discussions of Kashmir. What next?

In Kashmir: A Framework For Peace, V.Sudarshan has put forward a proposal for progress on the Kashmir issue. At its heart is converting the Line of Control (LoC) into a true border - and bunkers into crossing points. Converting the LoC into an international border - recognised and upheld by both India and Pakistan, and the international community - is not a novel proposition. While more of a whisper a decade ago, today it is a frequent, if private, refrain from senior politicians and officials in Delhi. It remains a peculiarly strangled position. For in advocating it, its supporters drop all pretence to uphold the territorial integrity of J&K. The claim to the entire state of J&K is dropped. This, at least, is pretty realistic.

Despite many jibes about Pakistani Kashmir, some deserved, it's tough to argue with the fact that many residents of that part of J&K are comfortable with being Pakistani. The nationalist claim, as put forward by the JKLF, remains untested. In part this is due to the lack of democracy in Pakistani Kashmir, in part it could reflect that fact that Mirpuris and Punjabis are neighbours as well as uneasy rivals. Muzaffarabad may style itself as a capital city, but it remains a provincial town, without even a newspaper to call its own. For all the militants and 4-wheel drives, it is a pretty sleepy place. Let it slumber.

So far, so good. But a deal on Kashmir needs more than a passing nod in the direction of the status-quo. The Kashmir problem is about two groups of people who have a problem with the current state of affairs. Most Pakistanis. And many Kashmiris. Figuring out how much of a problem - and where compromises could be struck - has been the mantra for all those concerned about the Kashmir problem.

A(nother) Framework for Peace. So what has been suggested by V. Sudarshan? The LoC becomes the international border, with a series of offers to sweeten it for both Pakistan and Kashmiris. Effectively, what is the reality on the ground today becomes the ground-reality tomorrow. Only this time, peace, harmony and - it is suggested - an end to militancy prevail. V.Sudarshan reckons that a thaw in mindsets, and a pragmatic approach, could make a LoC 'solution' stick. Perhaps. Lots of his subsidiary suggestions make good sense. Victoria Schofield has already advocated the opening of the Srinagar-Muzaffarabad road. Indeed, Farooq Abdullah has been using the same call as an election slogan for years. Restoring autonomy is a more complex proposition.

While Article 370 or a recognition of Kashmiri identity in, say, passports, are put forward as important measures, in a sense this may not help. After all, for all the love and hate that is heaped on the figure of Sheikh Abdullah, he was by no means a democrat. The political model that he mastered in Kashmir, both pre-1953, and post-1975, was by and large an authoritarian, populist one. For a man whose memorial bears noble words about the will of the Kashmiri people, he was remarkably unwilling to consult it meaningfully. Bakshi, who followed Abdullah in 1953, may have been corrupt, undemocratic and willing to follow Delhi's lead. But was he that different from Sheikh Abdullah?

That said, a word about Kashmiris - and the deals that need to be made. Kashmir is a mix of different regions, peoples, religions and political parties. Political unity is as elusive as the normalcy craved by Indian politicans. There are two deals that have to be done on Kashmir, and the jury is still out as to whether they can be done jointly, as a full package, or separately. The first is to settle, or at least soothe, the Indo-Pak dispute over Kashmir. The second is to deliver a government and settlement that works for different Kashmiris, in different regions. Above all, it needs to earn the support, if not the love, of Valley Kashmiris. Militancy was born in the Valley, even if nurtured elsewhere, and it is there that a solution will succeed - or fail. The devil is in the detail.

Right now moves are afoot to push towards a first deal - and we are only witnessing another tentative step in that direction. It is great that Musharraf and Vajpayee are making all the right noises, even risking domestic opinion in the process. But it is tremendously difficult to move from public warmth, and the right words about cracking down on fundamentalism, or working credibly towards a deal on Kashmir. It is another to try and map out in the sand what a settlement might look like.

It is also important not to lose sight of the need for the second deal. It may well be, as a range of analysts and politicians suggest, that an overall Indo-Pak deal is impossible without cutting a settlement with Kashmiris. This is a position that I have put forward before. On the other hand, there are those, including US and Indian analysts, who argue that finding a way to settle the Indo-Pak dispute over Kashmir will, over time, generate the impetus to solve the problems of Kashmiris. Perhaps.

What of Sudarshan's other suggestions? Many are honourable. Of course the 1.6 lakh displaced Kashmiri Hindus should be allowed to return. (So too should the smaller numbers of Muslim Kashmiris who have also chosen to live away from the Valley.) Demilitarisation is also a sensible proposition for the entire region, supposing that security for ordinary civilians can be assured. A free-trade zone raises firm practical questions. Both Indian and Pakistani Kashmir are firmly dependent on government subsidies. Pushing free-trade in and between the two parts of Kashmir makes good sense, but it would also require major changes to the economies of both. All parts of the private sector, certainly in J&K, are facing tough times. Whether Kashmiri apples, houseboats or handicrafts, better quality competitors (and, dare it be said, even equally beautiful destinations) challenge the idea that the economy could take off. Hydro-electric power is one notable exception.

Proposals are fine. But can they be sold? The UN, American and British archives groan with papers from past attempts to forge a Kashmir solution. Some of the best diplomatic, legal and political minds of the 20th century grappled with the Kashmir problem - along with many of the worst. But the real problem, as Mariana Baabar pointed out in her piece from Pakistan, is how to sell a solution. And, as she explains, most Pakistanis just don't consider the LoC enough to cement a deal. The same could be said for Kashmiris. Those sympathetic to the All Parties Hurriyat Conference are sceptical of Delhi's motives. Kashmiri Pandits fear they will be left out. And even National Conference leaders are suspicious of moves that might challenge their primacy in the state.

Meanwhile, long-term Indian policy on Kashmir is difficult to read. Even so, it is tough to see how Delhi would offer more than the LoC, and even offering that comes at a price. The more talk between India, Pakistan and Kashmiris, the better. The less rigid a framework for those talks, whether formal or informal, the better. Because the talk can only lead somewhere when people are frank about what they could offer, and might accept. Two key principles could help guide discussions and commentary over the next few months. First, keep talking, but don't box people in too much. The challenge on Kashmir is to establish the grounds for a solution. Whatever that could be, it needs public support in India, Pakistan, and from most Kashmiris. The challenge is getting to a solution that can earn, and keep, that support. Second, don't expect too much, too quickly - either from Delhi, Islamabad, Srinagar or from militants. Only one thing is certain about the search for a just and enduring peace in Kashmir: it will take time.

(Alexander Evans is a regular commentator on Kashmir based in London. He has visited both Pakistani and Indian Kashmir in the past few months)