Bypolls Verdict: BJP Strategists Run Back To Drawing Board As Party Loses Majority In Lok Sabha

RLD's Tabassum Hasan has become the first Muslim MP to enter Lok Sabha from UP. 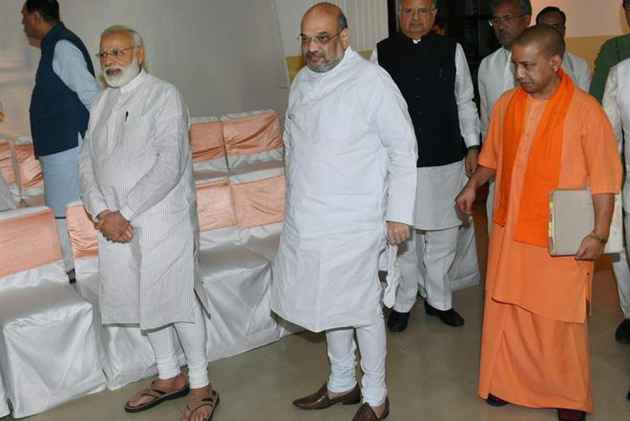 The BJP strategists are running back to the drawing board following the loss in Kairana by-polls, where the combined opposition yet again vanquished the party firepower. After the losses in the latest round of by-polls, the BJP has officially lost its majority in Lok Sabha.

The party’s number came down to 271, one short of the majority mark, after losing Kairana in UP and and Bhandara-Gondiya in Maharashtra seats to Rashtriya Lok Dal (RLD) and NCP, respectively. The BJP’s tally had come down to 273 MPs after the earlier by-poll losses including Gorakhpur and Phulpur in Uttar Pradesh, Alwar and Ajmer in Rajasthan, Ratlam in Madhya Pradesh, and Gurdaspur in Punjab.

Senior BJP leaders concede that they have to re-think their strategy, and that too quickly, if they want to retain power in 2019 Lok Sabha in face of the strengthening opposition unity. Campaigning by chief minister Yogi Adityanath and even the last minute road-show of Prime Minister Narendra Modi in neighbouring Baghpat – where he had gone to inaugurate the Eastern Peripheral Expressway on the eve of elections –did not help the BJP. PM’s promise that sugarcane farmers will get their due apparently did not assuage their anger.

Kairana was a prestige seat for them following the humiliating defeat in Gorakhpur and Phulpur, seats represented by chief minister Adityanath and deputy chief minister Keshav Prasad Maurya. Bitter rivals BSP and SP had come together to contest the seats and hand out a convincing defeat to the BJP.

In Kairana too, as RLD’s candidate Tabassum Hasan got open support of SP and Congress, and silent backing of the BSP, the BJP knew it was in for a tough fight. That is the reason, several senior leaders including chief minister Adityanath, campaigned extensively in the constituency. The seat, incidentally, had been the laboratory of polarization for the BJP, as it raised issues of ‘exodus’ of Hindu families and love jihad during 2017 Assembly polls.

The rift that was created between the Jat and Muslim families in the area seems to have subsided as the communities came together in electing Tabassum Hasan, making her the first Muslim MP to enter Lok Sabha from UP.