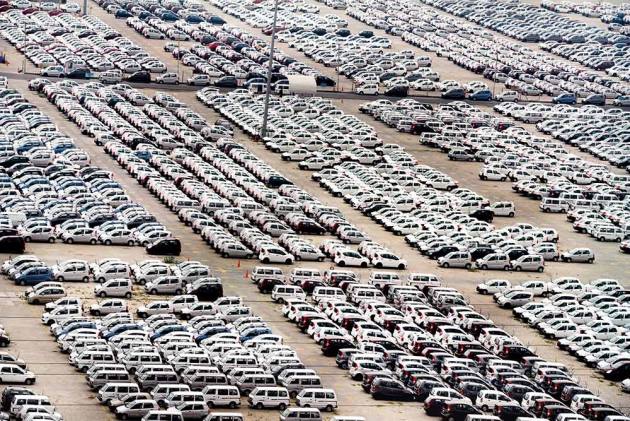 Automobile sales in India witnessed its sharpest decline in nearly 19 years in July, dropping 18.71 per cent, rendering almost 15,000 workers jobless over the past two-three months as the sector reels under a prolonged slump, auto industry body SIAM reported on Tuesday.

As per data released by the Society of Indian Automobile Manufacturers (SIAM), vehicle sales across categories, including passenger vehicles (PVs) and two-wheelers, stood at 18,25,148 units last month as against 22,45,223 units in July 2018.

The previous biggest decline across overall domestic automobile sales was recorded in December 2000 when it fell 21.81 per cent.

Similarly, domestic PV sales also saw the biggest fall in nearly 19 years, slumping by 30.98 per cent to 2,00,790 units as compared with 2,90,931 units in the same period a year ago. Previously, the worst decline was registered in December 2000, when wholesales had fallen 35.22 per cent.

The fall in PV sales in July was also the ninth consecutive month of decline.

"The data shows how urgent the need is for revival package from the government. There is urgent need for some kind do action. The industry is doing all it can to promote sales. I think this is the time when the industry really needs the support of government coming out with a revival package," SIAM Director General Vishnu Mathur told reporters in Delhi.

The revival package is necessary to arrest fall in sales and to bring back the industry on growth path, he added.

Mathur said that almost 15,000 jobs, mostly temporary and casual workers, have already been lost in the automobile manufacturing companies over the last two to three months. Besides, over a million jobs are on the line in the automotive components segment, he added.

With plunging sales, nearly 300 dealerships have been forced to close down leading to loss of around two lakh jobs, Mathur said.

Underlining the current grave situation of the auto industry, he said that in the previous downturns the sector witnessed in 2008-09 and 2013-14, at least some of the segments of the industry were growing.

"However, this time around all segments of the industry are witnessing decline in sales," he said.

Seeking urgent government help, Mathur said, "We are hoping that the government would soon come out with a revival package... However, it is still not clear what all elements would be included in it."

The auto industry has sought reduction in GST rate, introduction of vehicle scrappage policy, revival of NBFC sector as sales are mostly dependent on availability of finance and delay in implementation of the proposed increase in vehicle registration fees, Mathur said when asked about the demands put forth by the industry to the government.

He said there was a consensus among the industry players for reduction in GST rate cut as it would help in bringing the cost of buying vehicles down.

"We are saying that reduction in GST rate, even for a temporary time, would help in reviving the sales... The more the industry goes down, more difficult it would become for it to come up," Mathur said.

If the industry goes down, the GDP will go down as automobile industry accounts for half of the manufacturing GDP and employs around 3.7 crore people directly and indirectly, he added.