Stellar returns by group companies push up Adani’s fortunes; Adani Green Energy reaps high returns. In the recent past, Adani's wealth has soared to new heights and nearly $55.3 billion got added to his kitty in 2021 till date.

Gautam Adani, chairman of the Adani Group, overtook Mukesh Ambani, the chairman and managing director of India’s most valuable company Reliance Industries (RIL), for a day on Wednesday, November 24, in personal wealth.

The $15 billion Aramco deal call-off led to a fall in the share prices of RIL. In fact, RIL’s share price was under pressure for the last one week on reports of the Aramco deal being called off.

Over the last one month, RIL’s share price has corrected over 9 per cent after hitting a record high of Rs 2,751.35 in October, leading to erosion in Ambani’s wealth.

Ambani has been holding the position of being the richest Indian since June 2015. But this is not the first time that Ambani has been dethroned from the top position. In 2015, Sun Pharma's Dilip Shanghvi was at the top spot, largely due to his stake sale in Sun Pharma. (That was also a Wednesday; March 4, 2015). Ambani’s challenger this time is none other than Gautam Adani.

How Adani Closed The Gap

Adani, the second-richest Indian in the list, has closed the wealth gap with Ambani rapidly, amid rising share value of its group companies. In the recent past, Adani's wealth has soared to new heights and nearly $55.3 billion got added to his kitty in 2021 till date. During the same period, Ambani added just $13 billion, according to Bloomberg. 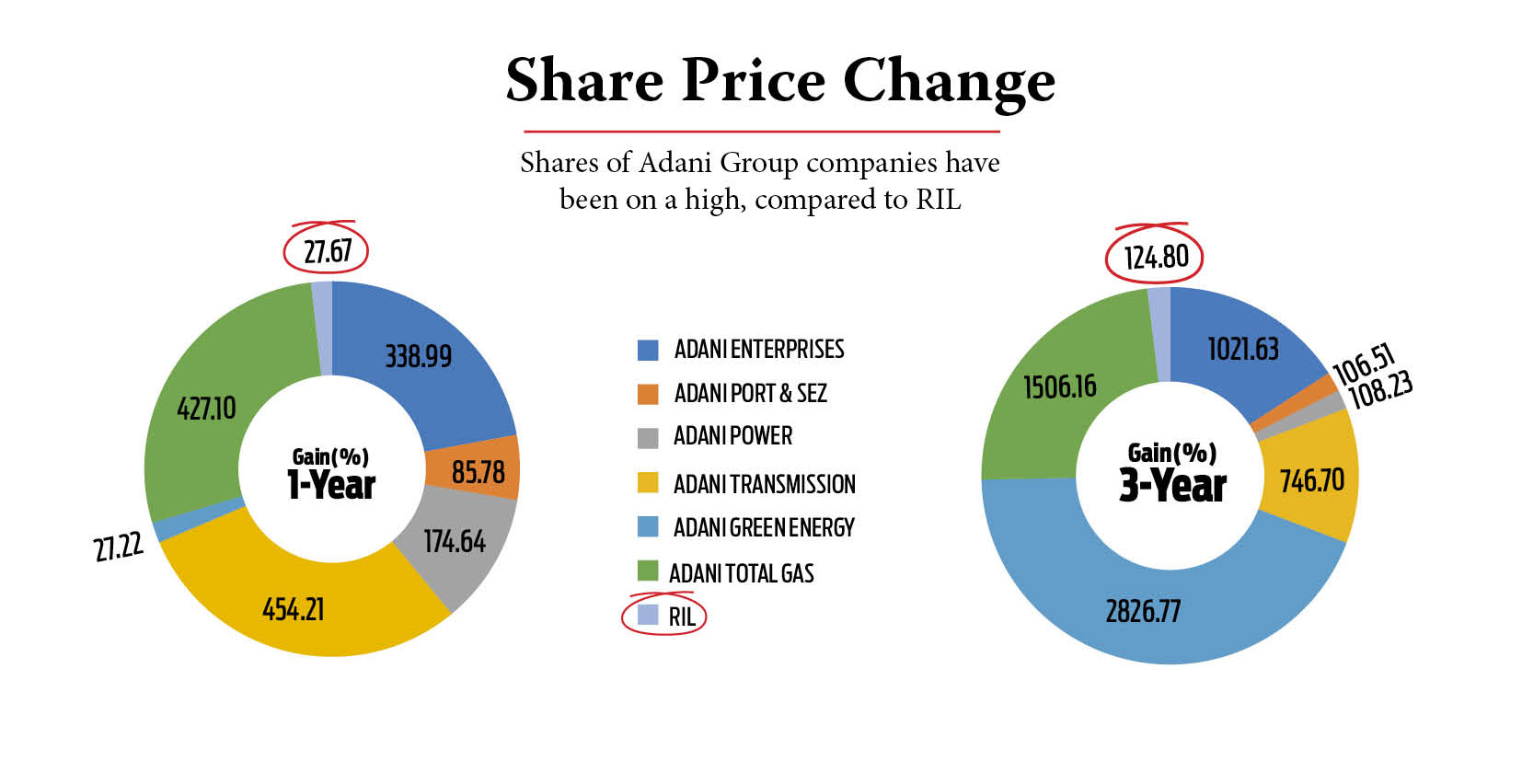 Let's take a close look at the financial indicators of Adani Group’s listed companies, and how he made such a fortune out of his companies.

Adani’s big bet on green energy is paying off. Adani Green Energy is the renewable energy arm of the group with a portfolio of wind and solar power plants. The company has been exploiting the growth opportunities on the back of the government’s Green Energy Mission. It has aligned its objectives with the government environmental target of becoming a zero-carbon emission country in the near future.

Adani Green Energy got demerged from its parent in 2018 and since then, it has picked up more momentum. In the last three years, the shares of the company have given astronomical returns, of 2826.77 per cent.

Adani Total Gas and Adani Enterprises have given 1,506 per cent and 1,021 per cent returns, respectively, for the same period.  In the last one year alone, Adani Transmission has risen 454 per cent.  Out of the six listed companies of Adani Group, four have delivered higher three-digit returns in the last one year.