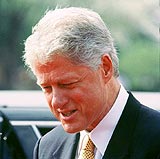 What happened during the exclusive, 40 minute-long meeting between Bill Clinton and the Ambani family? Speculation notwithstanding, insiders claim the meeting discussed some of the issues the former US President wants to take up in the days to come. Issues also close to the Reliance business agenda. First, Clinton wants to form a think-tank which will work on — among other issues — the Taliban. Now, for long, the Ambani family has been trying to use global political clout to see whether their dream pipeline (from Turkmenistan - the original plan was of Unocal's) can ever happen. Besides oil and gas, other issues discussed included new markets for Reliance in the West. Interestingly, Reliance is exporting both petrol and diesel from it's state-of-the-art-refinery to markets in the United States and wants to use Clinton's clout to garner fresh markets. And what would the family do for the former US President? There are already talks of the family picking up a special chair in the proposed library the US administration plans to open for the former president in his home in Georgia. But in this case, it's not an exclusive area for the Ambanis because a host of other Indian conglomerates have also pledged similar amounts to Clinton during his current visit.

Remember the first round of negotiations between veteran filmstar Amitabh Bachchan and Star TV for the much-publicised Kaun Banega Crorepati? That time Bachchan was in the red and chased (read hounded) by creditors. But now the situation has changed and the superstar is on a high. So it's obvious he will discuss new rates, and that too huge ones. The buzz is that News India Television is lobbying hard with Samajwadi Party leader Amar Singh to request his friend Bachchan to reduce the charges from an astronomical Rs 200 crore a year. Star TV is ready to shell out approximately Rs 175 crore. Last heard in Mumbai — Bachchan was ready to come down by just Rs 10 crore, but not less than Rs 190 crore! Star TV is definitely caught in a logjam. Especially because the million dollar question remains: Can you afford to say no to the Big B?

Are the various ministries in the government worried about more Tehelkas? Perhaps yes. The ministry of power recently called for a round of presentations in the Indian Capital from various public relations agencies. And what was the brief? How to present the government's viewpoint in a manner that is not seen as negative by the press. And also by the independent power producers (IPPs). What prompted the move? Ministry insiders claim Suresh Prabhu wants a major image-building exercise, considering the fact that Enron is virtually on a warpath and flooding the dailies and magazines with their counter-guarantee threats every now and then.

What is next on Vijay Mallaya’s mind? Well, the news is that the United Breweries chairman is currently negotiating with both Heineken and Carlsberg — two of the world’s best global beer brands and wants to launch one by the end of this year. At a recent press conference in Mumbai, Mallya confided that talks were on with both the groups and said he was confident that such a tie-up will not hamper his own Kingfisher brand. How is that possible? Mallya is contemplating setting up special Kingfisher pubs acrosss 20 cities in the country where a special section will offer one of these brands.

So the choice for the consumer — according to Mallya — would be relatively easy. You can have either your favourite Kingfisher. Or the phoren one. And the price difference — says Mallya — will not be much. 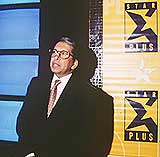 What is former Star TV CEO and TARA (Television Aimed for Regional Audiences) chairman Rathikanta Basu upto? TARA insiders claim Basu, whose channels are floundering because of lack of funds (some are on the verge of downing shutters), has recently picked up funding worth a whopping Rs 80 crore! Does that mean TARA will be back on rails? Not many know. But what they know is that Basu has acquired a brand new BMW and has started his social calls again. Who are the new ones on the list? This time it is Nalini "Aankho Dekhi" Singh. Basu wants her to handle the Bhojpuri channel along with BJP sympathiser and former filmstar Shatrughan Sinha. Meanwhile, the poor souls in TARA Bangla, Punjabi and Gujarati wait with bated breath in the wings — hoping for manna to fall from heaven.

The first fallout has taken place in the bureaucracy following the fast track race for the coveted post of the chairman and managing director of the state-owned, cash-rich Oil and Natural Gas Corporation (ONGC). This is the latest. Realising that the PMO is all set to clear the papers of IOC human resources and public relations director Subir Raha for the post, ONGC Videsh chairman Atul Chandra — considered one of the finest persons for the slot — has put in his papers. Last heard in the ministry: Ram Naik was desperate that Chandra takes his papers back. But Chandra, it seems, is in no mood to relent.

The Rs 45-crore Coca Cola account has shifted from Chaitra Leo Burnett to McCan Erickson but problems still continue. Insiders at McCann say the account has come with it's routine share of problems. Coke officials — claim McCan officials — are insisting that McCan hire two executives (CLB client servicing director Viren Razdan and creative head Bipasha Banerjee) to handle the account. Apparently, the duo of Razdan and Banerjee had handled a number of Coke campaigns when the account was with Chaitra. But the proposal has been rejected outrightly by McCan head Sorab Mistry. And why not? Mistry had told Alex Vohn Behr in a recent meeting that his own offering, Zap Sengupta (formerly of HTA who worked for more than a decade on the Pepsi account) was a much better bet. The final verdict from Coke is yet to be announced.

Is Dabur's new venture into insurance already facing trouble? Else, why did the Burmans call the top management and inform it of the family's reservations about the venture? Does that mean the deal is off? Dabur officials, as usual, are keeping mum.