Between 'Venom' And 'The House Of Wine' 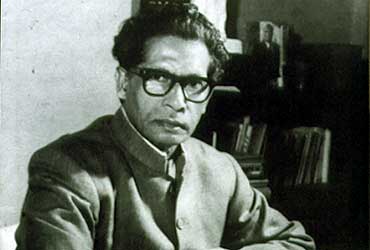 outlookindia.com
-0001-11-30T00:00:00+05:53
Harivansh Rai Bachchan’s departure is an irrecoverable loss for poetry. Call it what you will -- songs, progressive songs, modern songs -- whatever lyrical poetry is being written in Hindi today originates from Bachchan. In the heydays of Chhayavadi poetry (a genre of Hindi poetry said to be influenced by the Romantic movement in English poetry), Bachchan chose to compose songs in a simple and accessible language which could appeal to the common man.

By writing in an everyday conversational language, he poeticised Hindi khaRii bolii. This was the period when kavi sammelans were not very common. Urdu poetry was on the lips of ordinary people, and there was a healthy tradition of  mushairas that were organised at various places. The occasional kavi sammelans that took place were organized by princely states and only traditional forms of Hindi verse (savaiyya and chhand) were recited there.

Bachchan nurtured Hindi lyrical poetry through its infancy and heralded a healthy tradition of kavi sammelans. Poets in those days were merely paid travel expenses and it was thanks to Bachchan that honorariums began to get paid. Bachchan's Madhushala made kavi sammelans so popular all over India that they began to be held almost every other day. One can't today imagine such crowds as thronged to see and hear Bachchan. No other poet of the last century was so popular. He was the first Hindi poet whose popularity transcended national borders. Perhaps no other poetic work in Hindi has had as many editions as Madhushala. The House of Wine, translated into English by Marjorie Boulton, made him into an international celebrity.

My introduction to Bachchan was thorough a collection of his poems called Nisha Nimantran (The Call of the Night).  I used to study in the ninth grade at that time. One night, I sat down to read Nisha Nimantran and after reading a hundred poems in it, I felt surrounded by an invisible, pensive, loneliness. I was inspired by it to approach poetry and wrote many similar poems that were later compiled in my first collection, Sangharsh. I dedicated this work to Bachchan. When I sent a copy of this book to him, he replied with an affectionate letter. And thereafter we remained in touch increasingly.

I am reminded of an incident which is worth mentioning here. Later, once, a kavi sammelan was organized at Banda. It was perhaps 1945 or 1946. I lived in Kanpur then. Bachchan was also to travel to Banda, so he had come to Kanpur. From there, we both got on to a bus for Banda. The bus was very crowded. Bachchan got a place to sit, but I could merely get a place to stand. Bachchan said, "Neeraj, come, sit on my lap" (meri god meN baiTh jaao) "Since you are adopting me," I replied, "please bless me so that I may become as popular and respected as you are."  Perhaps it is the result of his blessings  that has kept me reciting on the podium of Hindi poetry for the last sixty years, and despite my seventy eight years, I still continue to get affection from the public.

Those who have seriously studied Bachchan's entire work would know that he articulated, in its totality, the ordinary life lived by the common man. From Madhushala (The House of Wine) on one hand to Halahal (Venom) on the other; if he wrote Ekaant Sangeet (Solitary Music) he also wrote Milan Yamini (The Night of Meeting). Between Halahal and Madhushala, between Poison and the House of Wine, exists the whole of life. These are the two extremities of life. So too are seclusion and meeting -- two extensions of human consciousness. Between venom and ambrosia, between seclusion and meeting, there's joy and sorrow, triumph and tribulation, rise and fall, separation and coming together, life and death.

These polarities express the totality of life. And that's Bachchan's biggest contribution to literature. No other poet in the past century could versify the entirety of human experience. Bachchan turned the ethereal vision of Chhayavadi poetry down towards earth. The common man was at the heart of his poetry. The truth is that the critics never took Bachchan's poetry seriously. Possibly his popularity and Madhushala were the hurdles. Even a work like Nisha Nimantran was not understood properly. And perhaps no one even read Halahal. Reading one poem from Nisha Nimantran does not have any impact.. It describes every agonising moment, from dusk to dawn, of solitary nights spent without rest. Although Madhushala is his most popular work, yet the seriousness with which Halahal versifies different aspects of life and the universe is unparalleled and unique.

Bachchan may no longer be with us, but he will forever remain in public consciousness through his timeless words. Every one has to go one day, but the peak of prestige, respect and adulation the Bachchan family has earned due to his work and his son Amitabh’s efforts is a privilege very few enjoy in this life. Harivansh Rai Bachchan lived a full life, so there is no reason to mourn. I will like to pay my humble respect to Bachchan with these words:

Of all with fame, or no name,  none is here to stay
For each one’s time will come, be it at night or day

(Gopal Das Neeraj was born in Etawah in 1926. Author of several books – Sangharsh, Dard Diya, Pran Geet, Nadi kinare being a few of them, Neeraj is still active and draws large crowds to the Kavi Sammelans he visits.)