It seems the terrorists did not want to cause mass casualties but their primary objective was to convey a message that they have the capability to hit when and where they want. 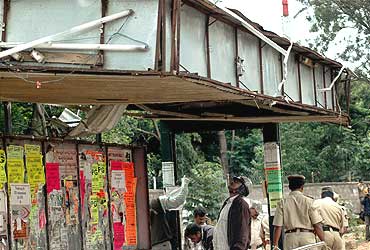 Between two and three persons are reported to have been killed and about 15 injured in a series of possibly eight blasts of high orchestration, but low intensity, in Bangalore on July 25, 2008. The blasts reportedly took place within about 12 minutes around 1-30 PM, that is, after the Friday's mid-day namaz in the local mosques were over.

The high orchestration used in timing these blasts, with some precision, resembled the serial blasts in Jaipur in May last and in three towns of Uttar Pradesh in November last. While timers were used to activate the improvised explosive devices (IEDs), the explosive material used does not appear to have been of a sophisticated kind.

Ammonium nitrate, mixed with a booster, was the preferred explosive in previous terrorist incidents, but one does not know whether ammonium nitrate was used in the Bangalore blasts too. Some TV reports speak of the possible use of gelatin sticks. If so, these blasts would resemble, from the point of view of the composition of the IEDs, the serial blasts in Coimbatore carried out by Al Ummah, a Muslim extremist organisation of South India, in February 1998 to protest against the alleged police excesses against Muslim youth after the demolition of the Babri Masjid by a group of Hindus at Ayodhya in Uttar Pradesh in December,1992. Investigation into the Coimbatore blasts brought out that the Muslim youth had fabricated the IEDs with the help of explosive material stolen from the quarries of South India.

From preliminary reports, one could make the following surmise:

The blasts would definitely create nervousness amongst the foreigners living in Bangalore and get additional publicity for the perpetrators, but this was only their secondary objective. Their primary objective was to convey a message that they have the capability to hit when and where they want.

After 9/11, the Americans got into the habit of blaming Al Qaeda for every act of terrorism happening anywhere in the world and then collecting evidence. As pointed out by me in my previous articles, we seem to have got into the habit of blaming the Lashkar-e-Toiba (LET) or the Harkat-ul-Jihad-al-Islami (HUJI) every time an act of terrorism takes place even before we have sufficient evidence.

We should get rid of this habit and keep an open mind regarding the perpetrators. It is important to probe thoroughly into the activities of Al Ummah, which used to have cells in Bangalore, the Students Islamic Movement of India (SIMI) and other angry elements in the Indian Muslim community.

We have had three waves of anger among the Indian Muslim youth--the first was after the demolition of the Babri Masjid in 1992 and the second after the Gujarat riots of 2002. These waves have since dissipated. Since last year, one has been noticing a fresh wave of anger after the convictions awarded to a number of Muslims by a Mumbai court in the case relating to the Mumbai blasts of March,1993. A common theme in all their Internet chatter is what they see as the inherent unfairness of the Indian criminal justice system towards the Muslims.

While taking strong action against the terrorists, whoever they are, it is important to address this perception that our criminal justice system is unfair to the Muslims.

Fighting The Maoists With Mantras