With the Mahindra XUV300 set to launch today, we take a look at the real-world performance of its rivals and what the Mahindra will be up against.

In India, sub-4 metre SUVs are considered as the most practical set of wheels for small families. These SUVs not only boast of a high ground clearance that enable them to tackle anything our roads have to offer, but also pack enough space, features and safety kit to keep their occupants comfortable, entertained and safe. Most often than not, those looking at buying one of these SUVs also look at their fuel efficiency and cost of running before signing the cheque book. However, if you are like us, you’d want your SUV to offer stonking performance and brilliant ride and handling as well. We’ve already put the most popular offerings in this segment - the Ford EcoSport, Tata Nexon and the Maruti Suzuki Vitara Brezza - through their paces. And here’s how they stack up against each other.

Find out the real-world performance numbers of these sub-4 metre SUV below: 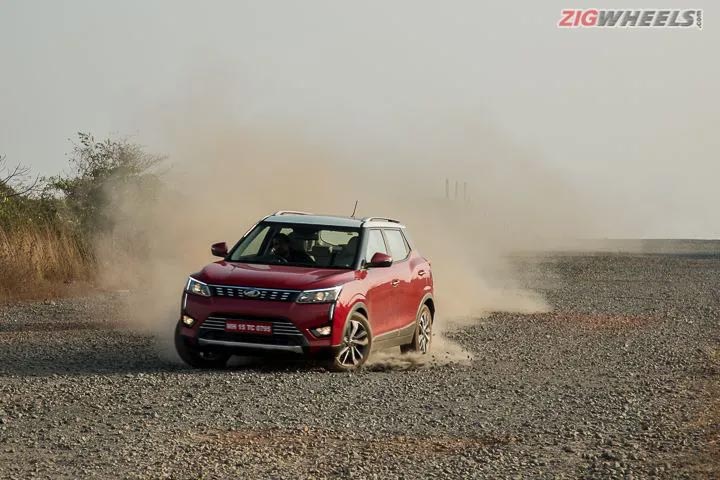 First up, let’s take a look at the engine specifications of all the diesel-powered SUVs here. While we haven't tested the upcoming Mahindra XUV300. yet, it won't be fair to leave it out. But rest assured, we’ll be bringing you an exhaustive review soon.

From the above table, it's pretty clear that the Mahindra XUV300 is the winner of the spec-sheet battle. It's not only the most powerful but also the torquiest here. Moreover, that 300Nm of torque is available right from 1500rpm, which should make it a hoot to drive in the city. But the Nexon isn't that far behind either. With 110PS of power and 260Nm of torque, the Tata is just 5PS and 40Nm behind the Mahindra brat. The Ecosport and the Vitara Brezza come in third and fourth, respectively.

But numbers can be deceiving. Out of the four SUVs, we have tested the Brezza MT and AMT as well as the Nexon MT and AMT. Here are their real-world performance numbers: 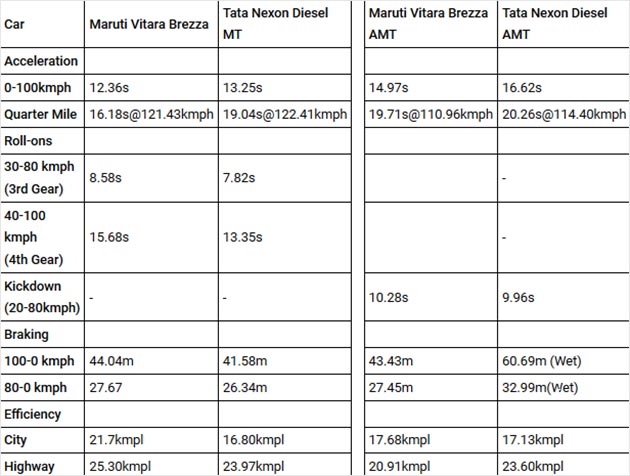 While the Brezza is down on both horsepower and torque, it does have a better power-to-weight ratio than the Nexon. Hence, the Brezza MT is close to a second faster than the Nexon MT in terms of outright acceleration. And the AMT variant is 1.65 seconds faster to 100kmph than the Nexon AMT. But the Nexon does put up a fight when it comes to roll-on figures. Both the manual and AMT versions of the Tata are quicker to accelerate between gears, making them a better city dweller. 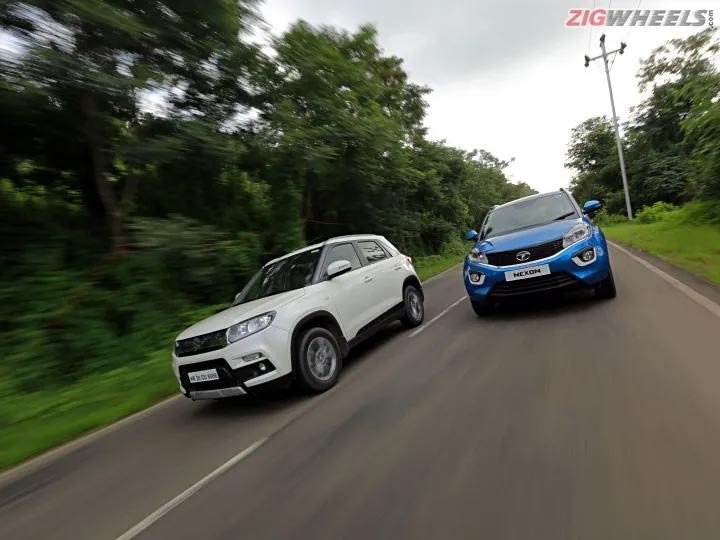 If you find yourself in the driver’s seat of the Brezza at a stop light and a Nexon turns up next yo you, rest assured that you’ll leave it in the dust, provided your driving skills are as good as our road testing chaps. 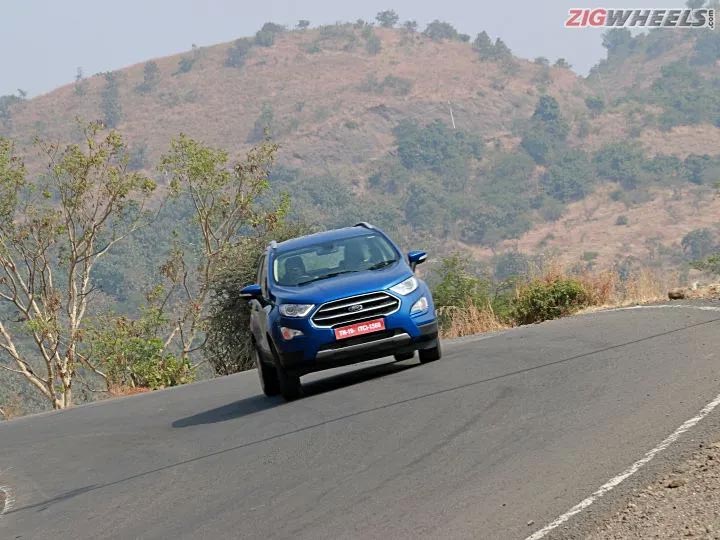 If you are more interested in performance rather than outright fuel efficiency, chances are you are eying the petrol variants of these SUVs. Sadly, the Maruti is not available with a petrol motor yet. So, let's take a look at the specifications of the Mahindra, Tata and the Ford instead. 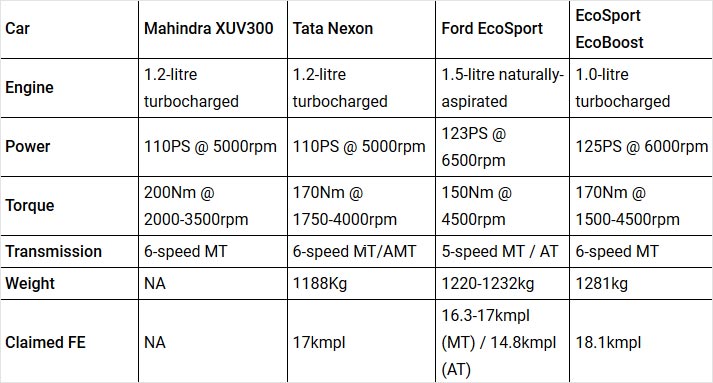 Out of the lot, the car with the tiniest engine - the EcoSport EcoBoost - stands out as the more powerful. While it is the smallest engine here, the turbocharger helps it make the most horsepower. Although both the XUV300 and the Nexon are turbocharged, they get a more relaxed state of tune. They both make 110PS of power but the XUV300 wins the torque battle, putting out 200Nm. The 1.5-litre Dragon engine in the Ecosport is a 3-cylinder naturally-aspirated unit and makes the least amount of torque at 150Nm.

Now, it's time to compare the real-world performance. Out of the lot, we have tested the EcoSport 1.5-litre MT and AT as well as the Nexon MT. Here’s how they fared. 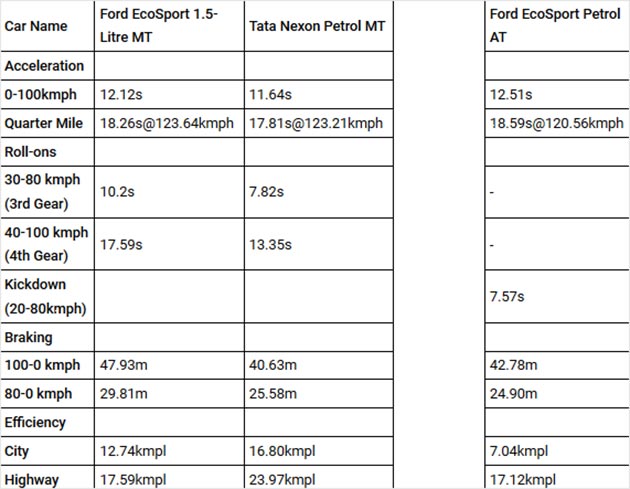 The Nexon is the more dominant SUV here. Out of the two tested, it boasts of better acceleration figures, is faster in gear and gets better stopping power as well. To top it all of, it returns better efficiency as well. However, when it comes to handling, the Ecosport feels sharper and more poised when compared to the Tata. In fact, it is one of the best handling SUVs in the segment. And while we haven't tested the Nexon petrol AMT yet, you can compare the figure of the EcoSport AT with the MT. 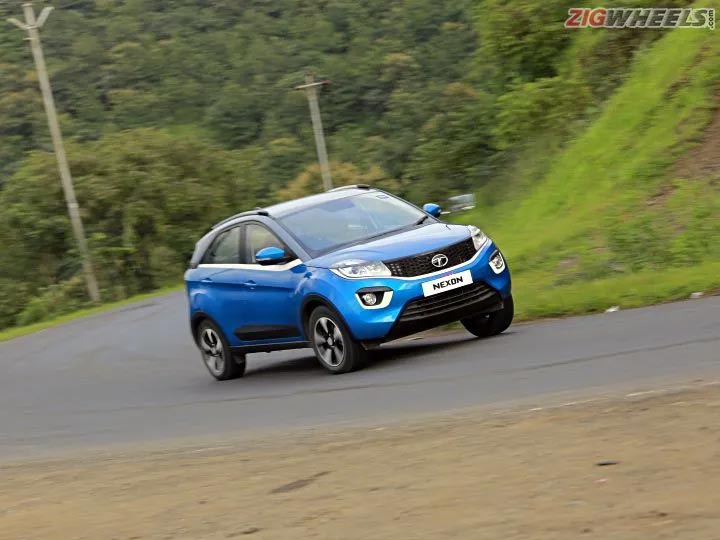 Overall, the Tata Nexon Petrol MT is the quickest to 100kmph. It is also the fastest one to stop from there as well. So if you are looking for a quick SUV, the Nexon petrol MT should be on the top of your list. But if efficiency if your primary concern, the VItara Brezza is the outright winner. If offers a good balance of performance and fuel efficiency. It will be interesting to see how the Mahindra XUV300 fits into this equation. We will be putting it through a thorough road test soon after its launch on February 14. So stay tuned.