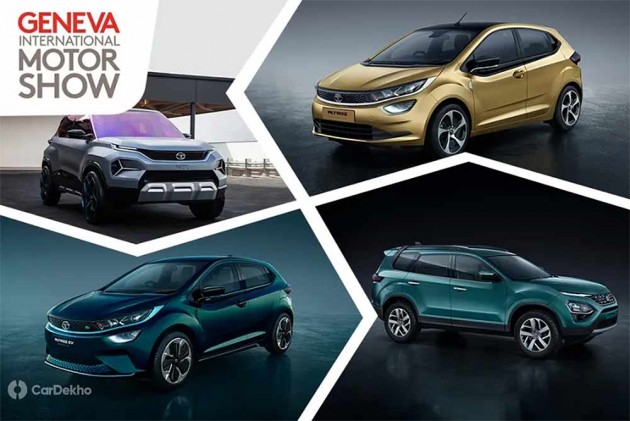 Tata Motors has showcased four new products at the 2019 Geneva Motor Show. Let’s take a look at each of them. 1. Tata Altroz (production version of the 45X Concept): The first car to be underpinned by the ALFA platform, the Altroz is basically the production version of the 45X concept, which debuted at the 2018 Auto Expo. It is a Baleno rival which will go on sale in India by mid-2019. Unlike the 45X, which measured over 4m in length, the Altroz’s overall length falls under 4m. 2. Tata Altroz EV: Along with the conventionally powered Altroz, Tata has also showcased an all-electric version of its premium hatchback. The Altroz EV will go on sale in India by 2020 and will have a range of more than 300km. It is likely to be the first long-range Tata EV to go on sale in India. 3. Tata Buzzard Geneva Edition (production version of the H7X; 7-seat Harrier): The Buzzard is essentially a 7-seater version of the Harrier and will go on sale in India by the end of 2019. However, Buzzard might not be the name that they will use for the 7-seat Harrier in India. The 7-seater not only shares its underpinnings with the Harrier but also borrows its front styling. Under the hood, it is powered by the same 2.0-litre diesel engine that powers the Harrier, but with increased output. The Buzzard’s rear end, designed to accommodate the third row, is completely different from that of the Harrier. Tata officially says that the Buzzard will be its flagship SUV. The current most expensive SUV in Tata’s lineup is the Hexa, whose top variant is priced at Rs 18.36 lakh (ex-showroom Delhi). 4. Tata H2X Concept: The H2X Concept will form the basis of an entry-level Tata SUV that is expected to get into production by 2020. It’s based on the same ALFA platform that also underpins the Altroz. The H2X-based production SUV will measure under 4m in length and will sit below the Nexon in Tata’s lineup. The H2X Concept is said to be a hint at the design direction of upcoming Tata cars under the Impact 2.0 design language.