The much-hyped 'prelude to the Ashes' turned out to be whimper instead of a cracker as the pacers and Martyn (78) guided the world champions to a comfortable six-wicket win that left England all but eliminated. 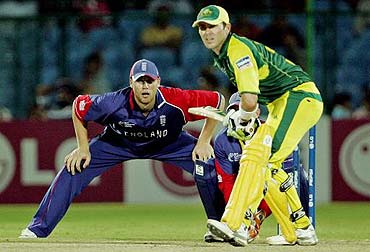 Damien Martyn provided the batting fireworks to guide Australia to a comfortable six-wicket win that left England all but eliminated from the ICC Champions Trophy today.

Martyn lit up Diwali day with an elegant 78 that helped the three-time world champions overcome an early stutter and reach the meagre target of 170 with 13.1 overs to spare at the Sawai Man Singh stadium.

Martyn's graceful innings, filled with 12 fours from 91 balls, came after an insipid batting performance by England saw them bowled out for 169.

As it turned out, the much-hyped 'prelude to the Ashes' turned out to be whimper instead of a cracker.

The result gave Australia, who have never won the biennial event, the crucial two points they needed after losing the first match to the West Indies.

England, who too lost their first match against India, now have to rely on too many permutations to go through to the semifinals.

The win also helped the Aussies maintain an all-win record against their arch-rivals on Indian soil, having won the 1987 World Cup final, the only time the two teams have met here before today's match.

It was the pacers, with an immaculate bowling performance, who set up the Australian win, though.

The trio of Brett Lee, Mitchell Johnson and Shane Watson demonstrated the art of hitting the deck hard to perfection while ripping apart the England line up.

Watson claimed three wickets for 16, including the key scalp of Andy Flintoff (4) while left-arm speedster Johnson returned figures of 3-40.

Put in, England squandered a solid opening stand provided by Andrew Strauss and Ian Bell and slumped from 83 for no loss to fold up in 45 overs.

Strauss top scored with 56 while Bell came up with a well paced 43.

However, the rest of the batsmen, with the exception of Paul Collingwood (22 not out), failed to reach double figures.

The Australian chase began on a wrong note as they found themselves precariously placed at 34-3 after losing three wickets in the space of four runs.

After slamming Sajid Mahmood for two successive fours, Adam Gilchrist seemed to lose focus following a brief stoppage when one of the light towers went out.

Coming as it did on the day of the Festival of Lights, the break was ironic.

The first ball on resumption, the left-handed opener left a gaping hole between his bat and pad for Mahmood to get one through to rattle the timber.

Mahmood then beat Ricky Ponting's bat with an outswinger and Strauss held on to the outside edge at first slip.

Watson, who had struck three fours for his 21, played all over an in-cutter from James Anderson and lost his off-stump.

At this stage, Martyn took charge with his batting class and found his touch early in the innings, as the lacklustre Steve Harmison fed him in his strong areas.

Martyn collected three successive boundaries from the first three balls bowled by the 27-year-old Durham player and added two more in his next over forcing England skipper Andrew Flintoff to take the pacer out of the attack.

The Western Australian received solid support from Mike Hussey who played the role of a sheet-anchor by mixing dead defence with precise nudges during his unbeaten knock of 32.

Earlier, there was little indication of the England collapse to come as Strauss and Bell negotiated the new ball without trouble.

Watson provided the breakthrough when he lured Bell into an uppish drive to Hussey at short-cover.

Kevin Pietersen came in at number three followed by the captain. Both were troubled by searing short pitched deliveries before they were dismissed.

Meanwhile, Strauss was in top form as he drove Bracken through the covers and then welcomed McGrath with successive fours off the bowler's first two balls.

The left-handed opener glided Watson to third man and then dabbed Johnson to the same fence.

But, he found himself in a knot against Andrew Symonds (1-11) and was caught behind while trying to cut the right arm bowler.

Three more wickets fell for the addition of 16 runs and Collingwood suddenly found himself without a partner at the other end.