Public art has never been so public that you can touch it and feel it without someone brandishing his dismissive finger at you. 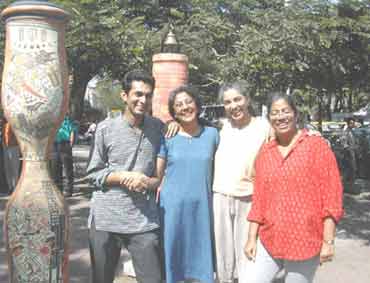 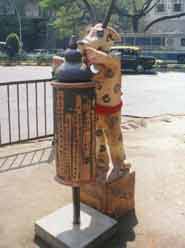 If you passed by the NGMA corner right across the museum towards Nariman Point in Mumbai anytime this month I bet you saw four clay entities that made you stop and wonder. Wonder if the Mumbai civic administration had thankfully hired a bureaucrat with a major in aesthetics to choose objects for public consumption. At least that's what I mused to myself.

Having been brought up on a diet of oversized penguins with large, open mouths that are supposed to say, "Come, fill me up with garbage" or equally gross monster-sized pots in which saplings are planted I was moved to tears, or close enough, when I encountered these four clay sculptures. 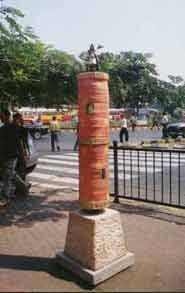 They seemed friendly, familiar and a bit like everything I knew and felt. This was certainly a backdrop against which I would send my pictures to friends in Europe to show off my city. Chance or divine intervention? Neither really. Just a carefully-planned venture of four young ceramicists who set out to do something in the scope of public art a couple of years back.

Backed by a grant from the India Foundation Of Arts at Bangalore for a collaborative work Amrita Dhawan, Vineet Kacker, Anjani Khanna and Madhvi Subrahmanian decided to create something in the realm of public art. Questions and issues that were central to the decision included the place of art in society, in people's lives. Should public art be in a public place or a public space? Public places were gardens, traffic islands and such where art was confined to statues of politically or socially important people.

These statues stand on high pedestals clearly sending a message to that the modest creature looking up. But art wouldn't seem so scary and snobbish when it can be seen at close quarters, outside the suffocating confines of a gallery and with no frowns in the immediate environment when you want to touch it to get a more complete feel. That was the premise of their joint decision.

They wanted their work to intermingle with the general public. "We want to create a point of pause in a busy city and engage the passer-by in a visual, conceptual and tactile way," says Khanna. For the artists, whom ceramicist, Ray Meeker, considers among the best in India, it would also mean working at a scale considered too large for domestic circumstances. This poses a technical and artistic challenge.

Displaying fragile, clay work within the range of vandalism and accident is a pretty brave thing to do. Most work that is seen in public works besides being well-ensconced is made of metal. Also, perhaps this is the first time that art here has been created specifically for a public space. The Times of India had the Timeless Art exhibition in 1989 and the first Kala Ghoda Festival that started a few years back brought art out on the Artists' Plaza outside the Jehangir Art Gallery. But as Girish Shahane, consulting editor, The Art News Magazine of India points out, the art displayed here was essentially from collections. 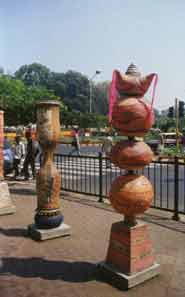 Shahane says that the private galleries typically brought out on the road the smaller and inexpensive paintings. It takes courage to put your art out on the road, he says. But these four agreed that their work was going to be created specifically for a public space. In fact they zeroed on this NGMA corner, a perfect microcosm of Mumbai life complete with hawkers, mochis, bus stops while providing a sweeping view of some of the best architecture of the city.

The works (one pillar by one artist) are grounded in a common theme -- "Bombay city" -- and abound with imagery, symbols and metaphors. They all rotate on axes as a metaphor of the ever-moving city. A composite creature -- Anjani, its creator calls it a Yali that abounds South Indian temples though it bears no resemblance to any gargoyle or griffin in this city -- represents the composite Bombay citizen, the city's melting pot of a culture.

The base of the sculpture is a crate-like cube with the city's name in its various avatars. Vineet's prayer wheels are trimmed with motifs of Kolhapuri chappals and shirts that are sold by street vendors while embedded mirrors reflect the city. The body of these cylinders wear mehndi motifs like the ones sold by a nearby hawker, who, incidentally, found his own work much finer than the clay work.

Amrita's sand clock has the internet world enmeshed in a fishing net. It denotes to me the old and the new, the traditional and the modern all co-existing in the same time. Madhvi's three clay globes rest visually on a pedestrian base complete with road markings.

Read a myriad meanings into them as you contemplate for as long as your personal journey permits. But one thing is for certain: No piece of Mumbai pedestrianscape has looked so nice as far as one can remember. Not for long, though. The four have no idea where there work goes from this turning, rather ironically.

After the largesse of the Kala Ghoda Festival committee and the civic authorities that let them exhibit the stuff till the end of February there is no definite plan except the godown. No other city is yet going to see this work and there are no buyers for it so far.

The Subcontinent On Stage