Former army chief General Deepak Kapoor who has been embroiled in one controversy after another on the pressing issues confronting India's security establishment. 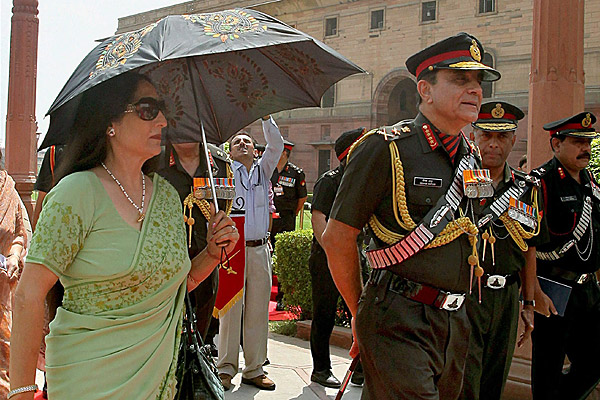 General Deepak Kapoor as army chief handed over the reins to General VK Singh, who has been involved in one controversy after another. In a freewheeling interview with Mihir Srivastava, Kapoor agreed to discuss pressing issues confronting India’s security establishment. Excerpts:

Is the Indian Army politicised?

From the time of Independence, Indian Army is groomed on liberal values. I am proud to say that Indian Army is secular, no decisions are made keeping people’s caste, creed or religion in mind.  This secular fabric needs to be protected.

Politicisation of the Army happens when a retiring general is lured by lucrative post-retirement assignments, electoral politics. Do you think that there should be a cooling-off period of a year or two after retirement before an army officer is allowed to take up a political assignment?

The political ambitions of a general can take an ugly turn. This is a hypothetical question: Can an army chief in India orchestrate a coup?

The way system is laid out, if an individual goes haywire, various corrective measures, checks and balances that are in place, come into play. The whole system cannot be subverted by an individual.

There’s so much talk about 'line of succession' for the coveted post of the army chief, and if a serving general decides to rakes up an issue, like dispute over date of birth, the whole line of succession is altered.

To the best of my knowledge, the principal of seniority is followed. There may be some exceptions, but by and large the government follows the seniority criterion to select a new army chief.

What do you have to say about a serving officer of the highest rank taking the government to the court for a service related matter, call it a fight for principals, and suddenly backtracks?

I will only say that I will never do it.

The judiciary wants minimal intervention of the executive in the appointment of judges. The courts want the transfer and postings of police officers be depoliticised. Don’t you think that same logic applies to the army, navy and air force?

The present system has worked well for last 68 years. The appointment of generals in the army is a prerogative of the government of the day.

One of the army chief in his autobiography has described babus of the defence ministry as 'growing mafia of bureaucracy'.

The army is answerable to the political authority. When the political authority is delegated to bureaucrats, there are issues. Try understand, most of the bureaucrats in the defence ministry are generalists, they don’t have domain expertise, don’t understand the culture of the armed force and are not well versed with the national security issues. This causes problems.

Corruption in the army is a cause of worry to all. The Adarsh and Sukhana scams hogged limelight.

A wrong decision in right earnest is not a scam. Corruption in the army is an aberration; remember the army is not isolated from society.

What about the secret funds that are designated for covert operations, should this be a matter of public debate?

While such issues should not be discussed in public, it should be a matter scrutiny amongst senior officers ensuring probity and judicious use of the expenditure of funds allocated for such purpose, in and only in, the national interest.

A retired army chief described media as press-titutes. What is your reaction?

The army interacts with the media in an organised manner. An officer of the rank of major general heads a department meant for day to day interaction with the media. Informal interaction of the personnel of armed forces should be limited. The media takes advantage of the people who have a vested interest and people use media to foster their personal interest.

Yes, as long as they are focused on their respective job, national interest and not personal interest. Take the example of BC Khanduri or Jaswant Singh, they did very well in the politics. General SK Sinha served the nation well as the governor of J&K and Assam.

Don’t you think some people get away, even flourish, saying objectionable things about people and institutions, simply because they know no one is going to challenge them from within the system, in the name of honour or loyalty?

Yes, your observation is right. Do not expect everyone to stoop down to that level.