America, Wake Up Before The Last Trump!

Trump seems to have a knack of appealing to the masses, but whose ability to lead a world power is in severe doubt 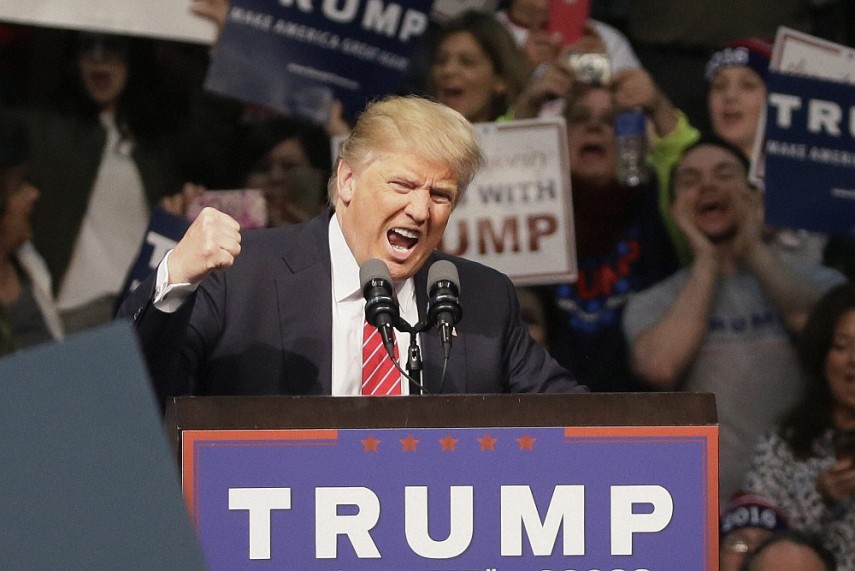 A FARMER comes to the big town for the first time. He visits the zoo and stands for hours transfixed before the cage of the kangaroo.

"There is no such animal!" he keeps exclaiming.

I must confess that I felt the same when I saw Donald Trump on TV for the first time and heard that he was a candidate for president of the US.

"Impossible," I muttered to myself. "Must be a hoax!"

The Americans are capable of many things. From time to time they indulge in a spell of collective insanity. Take Joe McCarthy. But not this! This is too much.

NOW IT seems that Donald Trump is well on his way to the White House.

Wait, I am told. These are still only the primaries. OK, something odd has happened to the Republican Party. But on election day, faced with the real choice, the vast majority of Americans will return to sanity and vote for his opponent, whoever he or she is.

I thought so, too.

I have a funny feeling that on the morning after the election I may wake up to a President Trump.

Probable? I am not sure anymore.

DEMOCRACY, Winston Churchill is said to have said, is the worst political system — except for all the others.

(Churchill, who was elected many times for different parties also said that to become disillusioned with democracy, it was enough to talk with an average voter.)

One of the faults of democracy is that it is based on a contradiction. The capacity to win a democratic election and the ability to lead a country are very different, and often contradictory, talents.

There are candidates who are sheer geniuses at winning elections. They woo the masses, beguile the rich donors. Once elected, they have not the slightest idea what to do next.

There are candidates who are born statesmen or women, endowed with wisdom and intuition, but have not the slightest chance of ever being elected. Presidential candidate Adlai Stevenson was once told that all the intelligent people were going to vote for him. "But I need a majority," he quipped.

And then, of course, there are the very, very few who are born leaders, who can both be elected and, once elected, lead their country with a sure hand. Churchill, again.

TRUMP, IT seems to me, is of the first kind. Those who have a knack of appealing to the masses, but whose ability to lead a world power is in severe doubt. More than that — I believe that he is a very dangerous person.

In the beginning, he looked like a clown. People discounted him. It was assumed that he would play around for a little bit, and then he would disappear. Those who said so have themselves now disappeared.

Then he looked like an unprincipled opportunist, a person who would say at any moment whatever entered his head, even if it was the opposite of what he had said the day before. Not serious. A fool. Unelectable.

Not any more. The Trump we see now is a very shrewd campaigner, a winner, a candidate who has an uncanny talent to channel the misgivings, resentments, anger and bitterness of the lower class of whites, who feel that their country is being taken away from them by corrupt politicians, blacks, hispanos and other riffraff.

WAIT! WHAT does the last sentence remind us of?

Of a person who also began by looking like a clown, then developed into a shrewd campaigner, promised to make his country great again, made a career out of the resentment against minorities (Jews in this case and leftists and homosexuals and gypsies and foreigners and the disabled), who said all the things his rivals were afraid to utter — and who brought untold misery to his country and the entire world.

Donald Trump is of German origin. His ancestors were called Drumpf and worked in a vineyard in a little town in the Rhineland. His grandfather, Friedrich, emigrated in 1885 to America. During the gold rush on the west coast, he opened a string of restaurants for lonely gold diggers, who were offered food as well as sexual services. That's how the Trump fortune originated.

But when Friedrich married a girl from his hometown, he wanted to return to Germany. There was a problem. The new German Reich was very strict about military matters. They discovered that Friedrich had left Germany just before he was of draft age and wanted to return just two months after his draft age had passed. You can't do such a thing. Not in the Kaiser's Germany. So they threw him out, all the way back to America.

One may idly wonder what would have happened if he had been allowed back into Germany. Would Donald Drumpf now lead an extreme-right party in Berlin?

IN THE heyday of Italian and German fascism, the American novelist Sinclair Lewis wrote a book called It Can't Happen Here. The title was ironic, because the book precisely showed that "it" can happen "here": fascism can win in the USA, too. But Lewis imagined a copy of European-style fascism, which was alien to America. So did the Italian writer Ignazio Silone, who also wrote a book - "The School for Dictators" — about a future fascist America.

There is no clear definition of fascism. Fascists have no holy book, like "Das Kapital" for the Communists. It has been said about fascists: "I'll recognize one when I see one". But every country has its own brand of fascism, and they can be quite different from each other.

Look at Trump. The total self-confidence of the Leader. The cult of brutal power. The unbridled nationalism. The incitement against minorities. The contempt for the political establishment (of both parties). No funny little moustache, but funny orange hair.

Since fascists claim to glorify their own nation as against all other nations, it could have been assumed that the fascists of different nations are enemies of each other. But in practice there is such a thing as a fascist international. Fact: the French fascist leader Jean-Marie Le Pen, who has been thrown out of his party's leadership by his own daughter because of his unbridled extremism (and anti-Semitism), has congratulated Trump, and so has the former leader of the American racist Ku-Klux-Klan. Trump has disavowed neither. Indeed, when he was caught quoting a line much beloved by Benito Mussolini ("Better to live one day as a lion than a hundred years as a sheep") Trump did not apologize. (Mussolini the lion himself begged for his life before he was executed by Italian partisans.)

In this light one must judge Trump's attitude towards the Israeli-Palestinian conflict. On first sight, it looks refreshing. All the other candidates of both parties grovel before Binyamin Netanyahu in abject submission, begging for handouts from the divers Sheldon Adelsons. Trump does not need the Jewish money. So he says the sensible thing: that he wants to remain neutral in order that as President he will be able to act as a neutral mediator.

Sounds good. But it sounds different coming from a KKK-sympathizer.

ALL THIS puts Binyamin Netanyahu in a quandary. What to do?

He detests Hillary Clinton, as he detests all Democrats. True, many years ago, as First Lady, Hillary once came out for a Palestinian state side by side with Israel. At the time, I organized a demonstration of support for Hillary in front of the US embassy in Tel Aviv. The marines did not allow us to approach. But since then much water has flowed down the Jordan river, and so has much money from Chaim Saban and other Jewish billionaires. Now Hillary grovels like the rest.

Netanyahu is a devout Republican. He would be very happy with a President Rubio or a President Cruz. But a President Trump? An anti-Semite? An Arab-lover? Well, stranger things have happened.

According to the Oxford dictionary, a trump is not only a card of the suit which ranks above others, but also a deafening sound. "The Last Trump" is the trumpet blast that will wake the dead on Judgment Day.

Let's hope American voters wake up before that.

IN THE 1960s, an aide ran to the then Prime Minister, Levy Eshkol.

"Levy, a terrible disaster," he cried out. "There is going to be a severe drought!"

"Where? In Texas?" Eshkol inquired fearfully.

"No! Here in Israel!" the aide answered.

"So what do we care!" Eshkol replied, relieved.

After publication, an alert reader has sent me the following correction:

"The Donald is no anti-Semite or KKK sympathizer. He has repeatedly disavowed Duke 19 times over the past two weeks. He's a significant donor to Israel, two of his children have married Jewish people with his total approval and one of them has even converted to strict Orthodox Judaism."

This was not reported here.

I don't like throwing around false accusations of anti-Semitism. I therefore apologize whole-heartedly.

This does not change my views about the man. Fascism does not need anti-Semitism, especially when it can use Islamophobia.

Fact: we have quite a lot of Jewish fascists around.