All In A Day's Work 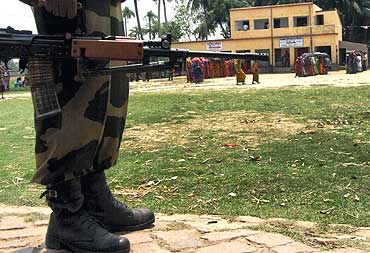 Violence and bloodshed are integral to politics; the meek and faint-hearted should stick to social work. This comes from Rudraneel Ghosh, a moderately-successful Bengali actor who is a card-carrying member of the CPI(M). Now consider this: Ghosh spoke out against the March 14, 2007, massacre at Nandigram because, as he says, the victims were poor farmers. He would have remained silent or even clapped in approval if the victims had been activists of the Congress, the Trinamool, or the BJP or 'class enemies' and 'reactionary elements' like the capitalists, the bourgeois or the elite.

The reason I quote Ghosh, who I had this conversation with very recently, is that he personifies the Marxist/Communist in India in more ways than one. And it is this sinister justification of political violence that explains whatever has happened in Bengal over the past few weeks. 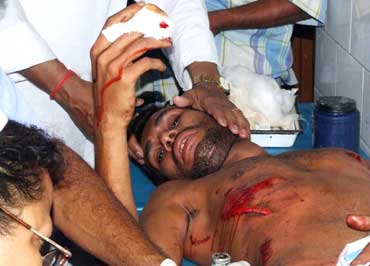 Because, for the Marxist, it is perfectly justifiable to maim and kill for political gains. That is the only path known to a Marxist to hold on to his political turf or consolidate his party's grip over an area. The niceties and norms of democracy are not only alien to the Marxist, he has little time and patience for all that.

And so it is that in the run up to and during the just-concluded panchayat polls in Bengal, CPI(M) activists were widely reported to have threatened voters, forced opposition candidates to withdraw from the fray, seized voter ID cards from opposition supporters and activists, captured polling booths, blatantly rigged the elections, bombed houses of opposition activists, attacked and killed men and raped women. All in order to win the polls and show to the world that Bengal's rural folk were solidly behind the CPI(M).

This display of 'support' had apparently become necessary after Nandigram and Singur that spread the impression that the CPI(M)'s grip on rural Bengal was slipping. At Nandigram, the party deployed its entire arsenal of dirty tricks and intimidation to not only beat everyone into submission, but also make the CRPF play second fiddle to party cadres. So blatant was the CPI(M)'s gameplan to subvert democracy that its local MP, Lakshman Seth, called up the DIG of the para-military force, Alok Raj, and ordered him to confine his men to the barracks. 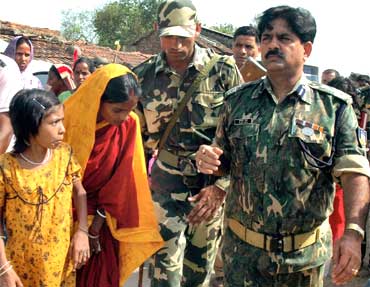 What Seth didn't bargain for was that Raj, a smart and fearless officer, would switch his cellphone to the loudspeaker mode for the whole world to hear the Lok Sabha MP's illegal instructions. But despite what ought to have been a severe embarrassment for the party, the CPI(M) had the impertinence to not only slap false cases against Raj, but also defend the indefensible act of Seth. Seth even had the gall to complain to fellow-Marxist (Lok Sabha Speaker) Somnath Chatterjee of breach of privilege!

As if an MP passing on illegal instructions to a police officer and preventing the latter from doing his duty is supposed to remain a state secret! For the record, the CPI(M) didn't bat an eyelid when the state home secretary pronounced the molestation charges filed by two women against the CRPF officer as trumped up and baseless.

To those in Bengal who know how the CPI(M) functions--unlike the rest of India that is subjected to the seemingly benign charms of the FabIndia kurta-clad Sitaram Yechury--it hardly comes as a surprise that the party hasn't only not taken any action against Seth or even censured him, but has even thought it fit to support him to the hilt. Because, for the CPI(M), Lakshman Seth has done no wrong. The objective is winning elections and strengthening the party and all means, no matter how foul or offensive they may seem to the rest of the world, towards this end are justified.

Look at what happens in Communist countries in the rest of the world and you'll get what I mean. Seth may have become a villain to those who value multi-party democracy (not China-style 'people's democracy', mind you) and democratic norms, but to the party and its leaders and cadres, he's a hero. Even when Chief Minister Buddhadeb Bhattacharjee was apologizing profusely for the ham-handed manner in which Seth issued the land acquisition notice in December, 2006, there was never any doubt that Seth would be disciplined or even reprimanded. 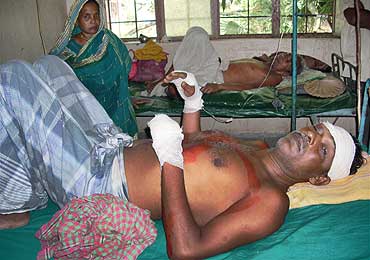 Whatever Seth did--ordering the rigging of the panchayat polls, asking his cadres to intimidate voters and opposition candidates and deploying the party's armed goons to allegedly attack, rape and kill opposition activists --was for the party and not for his direct personal gain. And since the CPI(M) believes in political violence and justifies it as an acceptable means to achieve a political end, Seth is a hero to the party.

If the CPI(M)'s misdeeds in Nandigram a week ago shocked many, the way its cadres shamelessly assailed men and women belonging to its junior partner in the Left Front--the RSP--during the second phase of the panchayat polls rendered even many prominent Left-inclined people speechless. The alleged attack by CPI(M) goons on the ancestral house of a Left Front (RSP) minister that led to the subsequent death of the wife of the minister's nephew ought to have shamed the CPI(M). 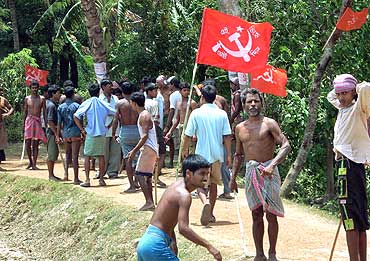 But no, leaders of the party--including the party state secretary, the irascible Biman Bose--tried to project the marauding CPI(M) cadres as victims. Bose, true to style, accused the minister of stockpiling weapons and ammunition in his ancestral house. There was no word of condolence or regret from not only Bose, but also Buddhadeb Bhattacharjee, a man the rest of India mistakes for a man of culture and sensitivity.

But why didn't, for instance, the CM offer a word of condolence to his bereaved cabinet colleague? Because doing so would have amounted to a show of sympathy for a political adversary who had to be defeated by all means. And that would not go down well with the party's militant cadres who had been given the task of wresting control of all areas that the RSP is strong in. The RSP, to the CPI(M), is no different from the Congress or the Trinamool, especially after the junior partner strongly criticized the CPI(M) after events in Singur and Nandigram.

Thus, it came as no surprise that the third round of polling on Sunday witnessed more violence. CPI(M) activists, armed with country-made bombs and illicit weapons, are again said to be the ones to have set opposition activists' and candidates' houses on fire, attacked them and killed many. Cameramen of the electronic and print media captured vividly CPI(M) activists' and leaders' attempts to rig the polls, including booth capturing, threatening voters and even stamping on ballot papers.

But nothing would discomfit the CPI(M), not even hard evidence of the way it rigged the polls and subverted democracy. Because, once again, the CPI(M) finds nothing wrong in employing means that others consider foul to achieve its political objectives. Yechury will deny all this, but people of Bengal will attest to this.

Getting back to Rudraneel Ghosh, I wonder if he'll be as blasé in his justification of political violence if he, or his party colleagues, get to be at the receiving end. I'm sure they'll scream violation of their human and political rights then. Hypocrisy is, after all, second nature to Marxists.