All Came To Naught

Before we knew it, the surprise over a stern sentence of five years had changed into shock at the grant of bail within hours. 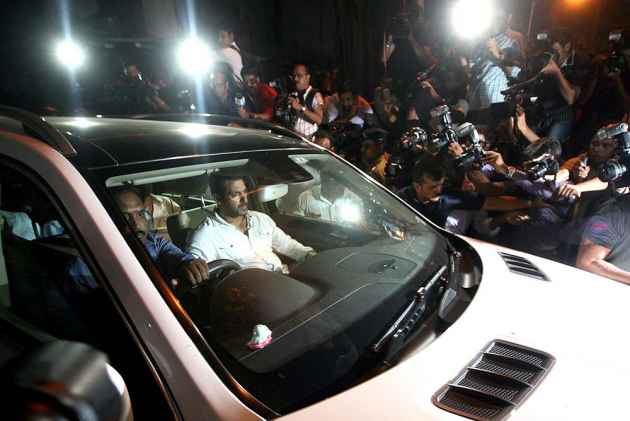 The first time I saw Salman in court, it was for his deposition in the Gulshan Kumar murder trial way back in 2001. The court room was jam packed with no air to breathe or an inch to move. As soon as he was declared a hostile witness (as he did not remember his statement or something) and he left the court room, the entire crowd, comprising of lawyers, media, court staff and some common people, disappeared in seconds.

Today was no different, with the only one difference. People had smart phones and were desperate to not just catch a glimpse of the star but even try and take a picture, which is not allowed in the courtroom. Since 10:45 am, courtroom no 52 in the Sessions Court, was packed worse than a Virar fast in peak hours. Everyone, Salman Khan, brothers Arbaz and Sohail, brother in law Atul Agnihotri, sisters Arpita and Alvira were all present and perspiring profusely, not out of tension but only because of Mumbai's May, much like the rest of us. Incidentally, they were all wearing white.

The judge D W Deshpande, without losing his cool, over the weather or the ruckus that erupted inside and outside of courtroom, declared conviction as 11:15 am itself telling Salman, "All charges against you have been proven". Salman simply nodded without letting out any emotion. The media took some time to realise that conviction had been announced and within minutes defence lawyer Shrikant Shivade was elaborating on how the sentencing needs to be lenient on following counts — in cases such as the BMW hit and run case or the Alastair Perreira case, the sentences were not more than three years though there were more than five victims. Here just one person died, the defence pointed out repeatedly. Then, since community service is an accepted form of retribution, his good work for "Being Human," which also runs a "little hearts" programme for paediatric cardiac care was detailed in court. Then there was an attempt to explain that Salman's own health — cardiac and neurological — is not too good but Salman signalled and stopped the lawyer from elaborating on it. Then there was reminding of his good behaviour since he got bail in this case. If all this wasn't cutting ice, there was an additional argument that if Salman doesn't earn, he won't be able to donate to his charity and hence scores of children will be deprived.

In the middle of this, just before noon, as we were craning our necks and every other part of the body to see the family's reactions, Salman's reactions, listening to the arguments, nudging each other rather violently and mumbling menacing warnings to those, who were present in court "for no reason," trying to catch mobile network by nearly falling off the windows, there was a loud fight between media persons and everyone else — lawyers and cops. The judge had to finally stop the proceedings and ask the staff to solve it or at least shut the damn doors. We were all still sweating profusely. Salman had still not reacted to the verdict.

Prosecutor Pradeep Gharat said talking about charity is not a good thing and that the left hand should not know about charity done by right hand. He said it was material evidence that needed to be considered and in fact it was "act of god" that more people had not died in the accident (apparently Salman had referred to the incident as an act of god, ouch.) He asked for maximum punishment of 10 years to set an example before the society.

At some point I also heard the prosecutor saying, "jungle of law," while referring to some judicial query. I think he meant "law of the jungle." But then it was all quite blurry.

Then the judge took a brief recess to ponder over the arguments. All those who were not allowed after the fight were now getting in. Suddenly the power went off, leaving all of us and more of all of us, standing our ground, albeit without fans. Court staff also gave drinking water to some of us. Grateful.

In the meanwhile, we heard shouts or perhaps cheers from the ground floor. There was no way to tell if it was from fans, protestors or another media clash. At about 1:30 pm sentence of five years rigorous imprisonment (and other lesser sentences for different sections) for culpable homicide not amounting to murder, was announced, nearly at the same time the power came back. Journalists squealed, I thought for the finally-working fans, but the judge asked us to behave. Soon the crowd started to disperse, but the family huddled together and were seen discussing future move. Reports said Salman cried but mostly he was just wiping the sweat I think. Oh also, activist Abha Singh's petition about role of police in damaging the case was rejected and a cost of Rs 10,000 was slapped for wasting the court's time. Prosecution's application of perjury for producing a false witness, driver Ashok Singh, was also not accepted.

While we waited for the order copy, we were told that he is moving the Bombay High Court. By 3:45 pm we were at the High Court crushing against another bunch of lawyers and media persons gawking at Harish Salve, no less, who seemed to have made time to appear for Salman's bail within two hours of the declaration of the verdict. No one really expected anything to happen at this stage, not until the following day. However, it took less than 15 minutes for him to argue that Salman should get interim relief of the earlier bail because the judgment copy was not ready. A simple legal argument and his existing bail was allowed to continue till Friday, by which time the accused will have seen the judgment. They may file an appeal against the conviction too.

Before we knew it, the surprise over a stern sentence of five years had changed into shock at the grant of bail within hours. Salman left the Sessions court, free for two days, and went to Galaxy Apartments to a humongous welcome from fans, friends from the industry and the media of course. A mini riot broke out while welcoming our hero, who had returned home after a tough day.

So what did the dramatic day really amount to? What does it mean — for the victims, for the judiciary, for wannabe Salmans who race on the Bandra roads, for police and for all of us as one society? I am still sweating over it.