The father and son shared the dais in the party headquarters here after a long spell, as workers gathered to wish the SP founder on his 79th birthday. 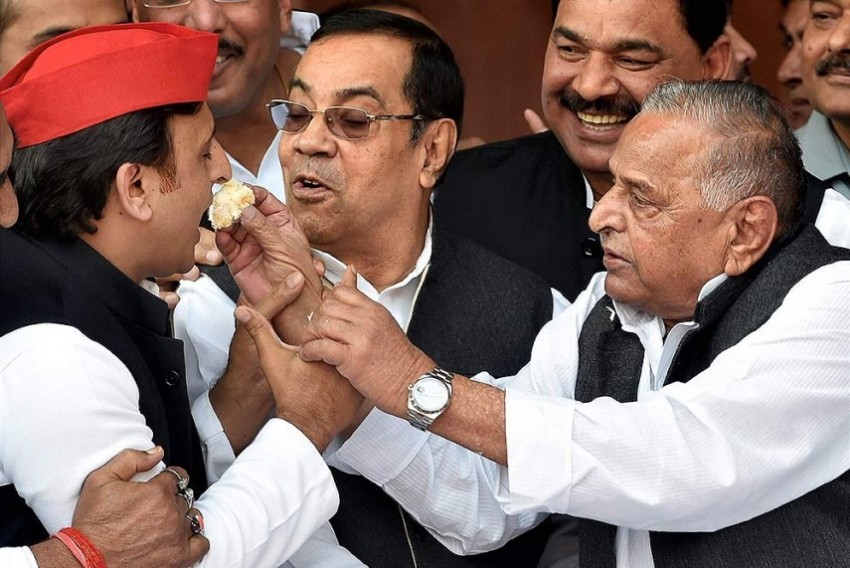 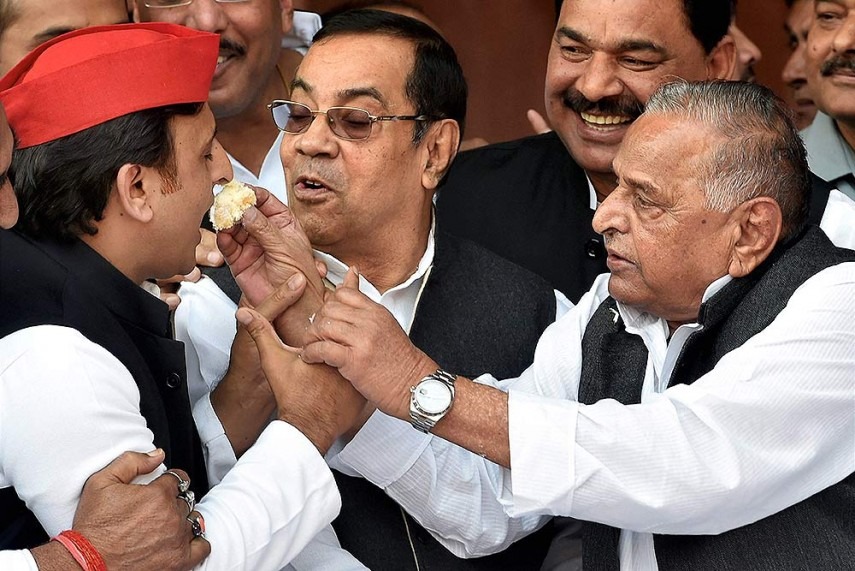 With a message that all was well in the faction-hit Samajwadi Party, former chief minister Mulayam Singh Yadav today said he had blessed his son Akhilesh Yadav, and would continue to do so.

The father and son shared the dais in the party headquarters here after a long spell, as workers gathered to wish the SP founder on his 79th birthday.

"He is a son first and leader later," Mulayam Singh Yadav said while addressing the workers.

As Mulayam walked to the dais, he was greeted by party leaders, with Akhilesh touching his feet and welcoming him with a shawl.

"I have given my blessing to Akhilesh and will continue to do so. This is an issue of discussion in the country that I blessed Akhilesh. I want to say he is my son and is also in politics," Mulayam said.

He conveyed his message of unity to the SP, which has seen a group led by his supporters rise against party president Akhilesh, as songs hailing the veteran leader -- such as Jai Jai Jai Mulayam" and "Man se Mulayam, Iradey Loha hain" -- played in the background.

Mulayam loyalist and Akhilesh's uncle Shivpal Yadav did not attend the celebrations.

But other supporters, including SP MLA Ashu Malik and Narad Rai, who joined the BSP during the Assembly polls, accompanied the patriarch.

Giving lessons of "samajwad" (socialism) to the workers, Mulayam held them responsible for the party's poor show in the Assembly elections, in which the party won only 47 of the 403 seats.

"You should all read Lohiaji. Our party always fought for the cause of women and discrimination on the basis of caste, religion and region," Mulayam said.

"What is 'samajwad'," he asked the workers and told them it was about "equality" and "happiness" and advised the cadre to connect with the masses.

Claiming that the BJP won the Lok Sabha polls with "false promises", including the claim that it would give Rs 15 lakh to everyone, Mulayam said the saffron party must ensure that its pledges were fulfilled.

"Not fulfilling promises is corruption. They can give Rs 15 lakh in instalments. Give Rs 3 lakh every year and in five years, the promise is met," he said.

He also pulled up Akhilesh for giving party positions to those who "cannot win (a seat) even at the level of their village polling booth".

"Those who could not ensure the victory of the party are being given big posts in the SP. There are many, not just one," he said.

He cited the example of a leader who, Mulayam said, had won only nine votes in his village, when his family itself had 51 members.

"This is a matter of shame that we won only 47 seats despite the welfare work being done by Akhilesh," he said.

Mulayam also cut a cake on the occasion and offered the first slice to his son.

Akhilesh, who was unanimously re-elected the party president at the SP national convention in October, had claimed he had the blessings of his father, though Mulayam and his estranged uncle Shivpal Yadav had skipped the Agra event.

Mulayam has not been on good terms with Akhilesh since his son ousted him from the post of the party national president in January.

Mulayam was born on November 22, 1939, in Saifai village in the Etawah district of Uttar Pradesh.