'It's something which I have been doing since my under-13 days. May be because I always used to play with older guys. May be that helped.' 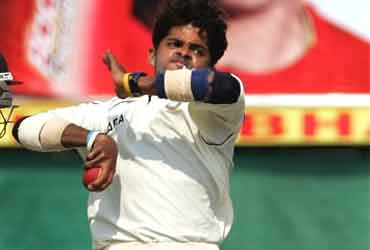 "It's something which I have been doing since my under-13 days. It is something that comes to me naturally. May be because I always used to play with older guys. May be that helped," the 24-year-old speedster said in an interview.

His stupendous enthusiasm for the game comes through when he says "I don't mind which wicket you play -- wet, dry, slow or fast. I just want to play cricket."

Inzamam had recently showered praise on the Kerala bowler, saying he had the aggression which was extremely essential for a fast bowler and that he was not afraid to look into the eyes of any batsman or pass a remark or two.

The Pakistani skipper had also remarked that Sreesanth had the potential to become one of the most feared fast bowlers in the world.

New to the international scene, Sreesanth does not appear to be bothered about the latest topic of discussion among the world's cricketers -- player burnout. He does not believe this would affect him as he is a "rhythmic" bowler.

"I am a rhythmic bowler. I have just played seven months of international cricket. I play a lot of cricket. I just want to play, play and play.

Asked to comment on Inzamam's views on him, Sreesanth said "It gives me pleasure and more ideas to work on. It's a great encouragement as a fast bowler. The Pakistani captain talking about me and (Suresh) Raina, it feels really good."

Sreesanth says he is now focussed on improving upon his bowling, particularly yorkers, and plans to do so at the Chennai-based MRF Pace Foundation.

"I am really looking only at the next match. I am going to the MRF Pace Foundation on May 5. I want to work on my fast bowling -- basically on my yorkers. I am also doing my strength work and lots of running.

"I want to keep the basics right. But obviously, as a cricketer once you go into the field, that extra comes out naturally. I will always push myself as I have been doing."

Sreesanth said he was eagerly looking to play against the West Indies in the Caribbean.

"I am prepared for it and looking forward to it. It's a dream playing in the West Indies, Australia and England in different conditions."

Sreesanth, who made his ODI debut in the first of the seven-match series against Sri Lanka at Nagpur earlier this season, has picked up 22 wickets at 32.21 in 15 matches so far. He has also played in two Tests, getting his first cap in the Nagpur Test against England.

Sreesanth said the last seven months with the Indian team had been a great journey.

"It's been great. I have to thank the Almighty, it's a great opportunity. The team management was always up there and supported me even when I was not doing well. I am really very very lucky to be part of this team.

"The team is doing a great job and being part of the current Indian cricket team, it's really lucky." Sreesanth is not disheartened by the placid wickets in India which give very little assistance to fast bowlers.

The bowler also said he intended to improve his batting as well along the way. "Yes. When the team really needs sometimes, God willing I will come out with some surprise".

On his experience of playing against England and Pakistan, Sreesanth said, "I learnt a lot of things. I came to know that all I have to do is keep the basics right, this is what Chappell Sir and Rahul bhai insist on. I just try to keep my basics right and not get distracted."

Sreesanth said he has been greatly inspired by Dennis Lillee and T A Sekhar.

"As a bowler, Dennis Lillee sir because of work ethics. The way he used to bowl and his aggressive nature. Even now, if you go to the MRF Pace Foundation if he is around, you can see him working at the gym. You will be amazed to see how he runs and the amount of training he does."

Asked who he thought was the toughest basman to bowl to, he promptly replied Sachin Tendulkar. "I am really lucky. It's an honour to be playing in the same team that has Tendulkar."

I Can't Be A Kaif Or Jonty