After The LTTE, What?

The LTTE is in its death rattle. After a decisive defeat, a handful of its leadership has cynically and cruelly prolonged the agony of the Tamil civilians by using them as a buffer and human-shield. The LTTE is deservedly dying, but the Tamil cause n 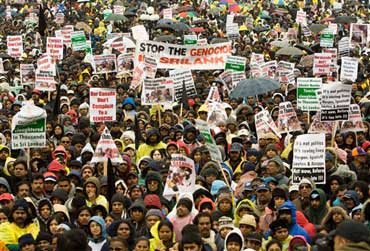 The Liberation Tigers of Tamil Eelam (LTTE) is in its death rattle. It was decisively defeated by the Sri Lankan Armed Forces weeks ago, but a handful of its leadership headed by Prabhakaran has cynically and cruelly prolonged the agony of the Tamil civilians by using them as a buffer and human-shield in order to delay the re-establishment of the writ of the Sri Lankan government in a miniscule piece of territory (about 20 sq.kms), which has been declared by the government as a no-fire zone to avoid collateral casualties among the civilians still under the control of the LTTE and to enable them to escape from the clutches of the LTTE.

Prabhakaran is a leader with a split personality. During the 26 years he has dominated the Tamil landscape in Sri Lanka, he had shown a remarkable organizing  capacity and an ability to motivate his followers to perform virtual miracles. His motivating his cadres to acquire a capability for action by air and sea would go down in the history of insurgency and terrorism as indicating an organizing capability of a high order. The LTTE under his leadership managed to bring almost the entire Tamil-inhabited territory in the Northern and Eastern Provinces under its control. The determined manner in which the LTTE fought against the Indian-Peace Keeping Force (IPKF) in the late 1980s and frustrated its efforts to defeat it spoke highly of its capabilities for a conventional warfare.

If Prabhakaran  had the activities of the LTTE confined to conventional warfare and developed the LTTE as a purely insurgent force, which targeted only the armed forces and not innocent civilians, he would have acquired greater support from the international community for the Tamil cause. The rational side of his personality as illustrated by  his organizing capabilities had to constantly contend with a highly irrational side, which drove him to simultaneously take to terrorism of a shockingly brutal kind. 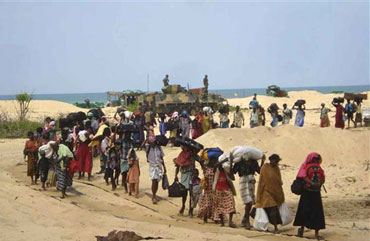 The targeted killings by the LTTE of many Sri Lankan Tamil leaders, who were perceived by Prabhakaran as possible impediments to his rise as the unquestioned leader of the Tamil community, and its brutal assassination of Rajiv Gandhi in May 1991 were the outcome of the irrational side of his personality. No other  Indian leader had done more to help the Sri Lankan Tamil cause than Indira Gandhi and Rajiv Gandhi. Only a sickly and sickening  irrational mind could have ordered the assassination of Rajiv Gandhi and Laxman Kadirgamar, a highly-respected Tamil leader, who was a senior adviser on foreign policy to former President Chandrika  Kumaratunge. The assassination of Rajiv Gandhi on Prabhakaran’s orders shocked Indian public opinion--including public opinion in Tamil Nadu-- and weakened Indian support for the Tamil cause. The assassination of Kadirgamar shocked the Western public opinion and led to the declaration of the LTTE as a terrorist organization by the Western world, thereby denying the last vestiges of Western support for the Tamil cause.

As the LTTE faced one defeat after another during the last three years from the Sri Lankan Armed Forces--initially in the Eastern Province and finally in the Northern Province--the irrational side of Prabhakaran’s personality erased his rational side. His shocking use of the Tamil civilians in order to delay the final end of the counter-insurgency and counter-terrorism campaign undertaken by the Sri Lankan Armed Forces is driven by this irrational streak in him, which now dominates his personality.

The prolonged agony of the Sri Lankan Tamils caused by the final  bout  of Prabhakaran’s irrationality and loss of lucidity in thinking has to be ended.  The Sri Lankan Armed Forces, which have shown  patience till now and deliberately slowed down their operations, cannot be faulted if they have come to the conclusion that the time has  come to liberate the  no-fire zone too from the clutches of the LTTE by undertaking limited operations with small arms and ammunition even at the risk of some collateral casualties to the civilians.

The desperate attempt of Prabhakaran  to use the civilians to protect himself from the advancing Sri Lankan Army can be attributed  to the total loss of lucidity in his thinking and his consequent inability to face the bitter truth that he and his organization have been defeated decisively by the Sri Lankan Armed Forces and that there is no chance of their staging a come-back. The Requiem for the LTTE could be written without fears of going wrong, should the LTTE stage a come-back as it had done on  occasions in the past. It has been defeated beyond recovery. His conventional as well as terrorist capabilities are in  shatters. Earlier conventional wisdom that small groups of the LTTE might still be able to keep indulging in sporadic acts of terrorism in different parts of Sri Lanks needs re-consideration. His desperate delaying action at the cost of immense suffering to the Tamils, whose cause he claims to espouse, is meant to give him an opportunity to seek safe sanctuary either in Tamil Nadu or elsewhere from where he could try to re-start his fight against the Sri Lankan Armed Forces. It is in the common interest of India and Sri Lanka that Prabhakaran is finally able to make peace with his Maker by either being killed by the Armed Forces or by taking his own life. A defeated Prabhakaran, if left alive in India or elsewhere, would not be a threat, but could be a nuisance for both the countries.

After the final death of the LTTE, which is expected any day, what is the future of the Sri Lankan Tamil cause? Would a Requiem for the LTTE also mean a Requiem for the Sri Lankan Tamil cause? Hopefully not. It is in India’s interest that the LTTE as a terrorist organization is destroyed once and for all, but it is not in India’s interest that the Sri Lankan government and Armed Forces proceed from the destruction of the LTTE to the destruction of the Tamil aspirations for greater political and economic rights in their traditional homeland and for greater human dignity.

Let us not forget that ever since our independence in 1947, the Bengalis of the then East Pakistan, the Balochs and Sindhis of Pakistan and the Tamils of Sri Lanka have been India’s natural allies. It was this reality which persuaded Indira Gandhi to assist the Bengalis of the then East Pakistan to achieve their independence. Even though successive governments in New Delhi refrained from supporting the causes of the Sindhis and the Balochs, Indian public opinion sympathized and continues to sympathise with their cause. It was sympathy for the Sri Lankan Tamil cause at New Delhi when Indira Gandhi  was the Prime Minister and in Tamil Nadu, which induced India to take up their cause in the 1980s.

There is no reason why India should not pride itself and seek to be the paramount power of the region. To emerge and remain as the paramount power, we need natural allies in the region around us. We should not let the legitimate aspirations of our natural allies--whether they be  the Sindhis and Balochs of Pakistan or the Sri Lankan Tamils-- be crushed by  a brutal regime-- whether in Islamabad or in Colombo.

Since 1947, the Balochs rose twice in revolt in favour of independence for their homeland. On both occasions, they were defeated by the Pakistani Armed Forces as decisively as the  LTTE by the Sri Lankan Armed Forces. The Pakistani leadership brutally used the Air Force against the Balochs to crush their freedom struggle. Undaunted by this, the Baloch people, under a new leadership, rose in revolt for a third time two years ago and their third war of independence is still going on.

President Mahinda Rajapakse has repeatedly promised that once the LTTE is defeated, he would be generous in meeting the political aspirations of the Tamils. He gives the impression of being a sincere man, but will the Sinhalese Army with its head bloated by its success against the LTTE allow him to do so? The indicators till now are not encouraging. Many Sri Lankan officers might have been trained in India, but their mindset and their attitude towards the minorities have more in common with those of their Pakistani counterparts than with those of their Indian counterparts. Therein lies the danger that after winning the war against the LTTE, the government, strongly influenced by a victorious army, might trey to impose a  dictated peace on the Tamils.

If the angry Tamils once again look up to India, there is no reason why we should not reciprocate provided a new leadership emerges in the Tamil community and it has drawn the right lessons from the brutalities of the LTTE.

The LTTE is deservedly dying, but long live the Tamil cause.