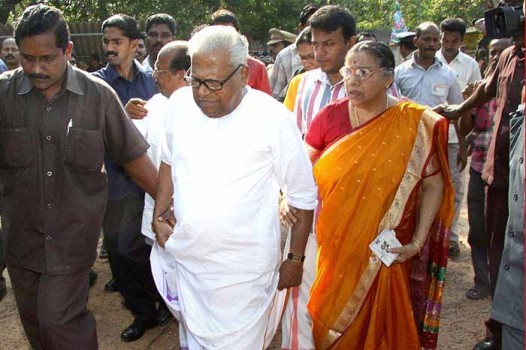 After the Left's defeat in Tripura, Veteran communist leader and former Kerala chief minister V S Achutanandan urged the party leadership to join hands with secular forces to fight the Sangh Parivar.
This has come even as the ruling CPI(M) in Kerala said today that the party's defeat in the assembly election in Tripura should be viewed with utmost seriousness.
"The country is facing serious challenges. The Congress, which had ruled for decades in the post-independence period, has become weaker now," the 94-year-old Marxist veteran said in a statement here.
The Left parties, which ruled West Bengal and Tripura, were also "weak," Achutanandan, who supported the party General Secretary Sitaram Yechury's line of having an understanding with Congress to fight the BJP, said.
As the Left parties had no strength now to fight and defeat the Sangh Parivar forces on its own, a tactical move with secular forces was necessary, he said.
Senior party leader and state Minister A K Balan alleged that the saffron party had "misused" money and power at the Centre for their victory in the northeastern state, which was considered as the fortress of the Left party.
BJP's victory was a challenge to the democracy and the national integrity, Balan told reporters at Kasaragod district.
"The BJP's victory in Tripura was the sabotage of democracy. What had happened there was not the people's mandate," he said.
Prime Minister Narendra Modi, BJP president Amit Shah and union ministers had camped in the small state before elections, Balan said, adding that the saffron party had even joined hands with "separatists" for the poll victory.
Senior CPI(M) leader, M V Jayarajan said in a Facebook post that the BJP's victory in Tripura was the result of money power and the "unholy alliance with terror groups."
Jayarajan, who is also the private secretary of Chief Minister Pinarayi Vijayan, alleged that the Congress leaders and its cadres had moved towards BJP.
He also said that the poll result of the state should not be viewed lightly and all the patriots in the country have the responsibility to check and isolate any effort of the communal forces gaining strength in the country.
However, CPI(M) state secretary Kodiyeri Balakrishnan is yet to react on the poll results of Tripura, where the CPI(M)-led Left was unseated after 25 years of rule.
Senior political bureau member M A Baby told PTI that the defeat of the party was "unexpected" but "we respect the verdict of the people."
"However, there is a decline of 6-7 per cent vote share of the Left front. It's a concern... How the erosion has taken place and why this happened will be dispassionately examined by the party in Tripura and the national leadership," he said.
A former state minister, Baby said the most of the votes of the Congress and its allies had shifted to BJP.
The failure of the Congress to hold on their influence was a primary reason for the victory of the BJP. However, this did not belittle the setbacks suffered by the Left, the leader said.
The BJP and its state ally, the Indigenous People's Front of Tripura, are set to form the next government in Tripura, after securing a majority in the 60-member assembly in the February 18 election.