'Address The Root Cause Of The Tensions' 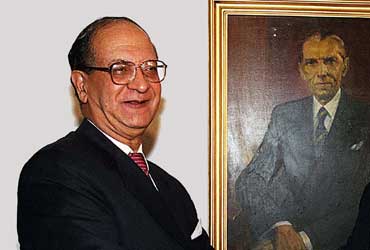 On whether a date has been set for the meeting:
Not a precise one, but generally the meeting is likely to take place in the first part of July.

On hopes for a breakthrough:
Determination of directions. I don't think in the matter of two days the two leaders will enter into a substantive discussion and arrive at a final settlement. We will be very content and I'm sure the people of Pakistan will, if the two leaders have a meeting of minds with regard to the destination and the directions and the modalitites of reaching that destination. We hope that both leaders will recognise the reasons and the causes that have kept us apart, that have made us from near to distant neighbours and that they will address the root cause of the tensions that have existed and that root cause has been identified in the correspondence that has been exchanged between General Pervez Musharraf and Prime Minister Atal Behari Vajpayee. And we hope that they will approach that question in a constructive and positive spirit.

On Pakistan's suggested course of action:
I don't know what General Pervez Musharraf is going to say and how he is going to start. As foreign minister and as a person who has been involved in Pakistan-India relations for one third of my diplomatic career, was twice ambassador to India, my cherished hope is that the leaders will turn the direction.

On being flexible:
We are going to be going there with a positive spirit, because if we don't have a positive spirit we shouldn't go there. What we are hoping is that the difficulties in the relations will be identified and you have a situation where the All Party Hurriyat Conference says that 75-thousand Kashmiris have died in the last 12 years.

On the urgency to stop the killings:
To stop the killings, and try to find a solution that will satisfy the Kashmiri people. That is why we have suggested that there should be consultations with the representatives of the Kashmiri people. I am quite clear in my mind that people who have sacrificed 75-thousand of their brothers and sisters, they will insist on a solution that is satisfactory from their viewpoint. They have their future and they have their generations to come.

On whether Pakistan will talk to the militants and ask them to stop:
No, what we hope the two leaders will discuss is how do we approach a solution that is acceptable to the Kashmiri people. I think that is the question to address, because if we start talking about militancy and terrorism and secessionism, etc, we will reach nowhere, because the fact is that a movement that started as a peaceful movement in 1989 was driven underground. These people were openly demonstrating and then the armed forces and the police were let loose and these people were forced into underground channels.

(From Part 2 of interview transmitted on Thursday 14th June)

On the Pakistani crisis:
I think there is a recognition by the UK as there is by the IMF that Pakistan is emerging from the crisis which it was in 1999.

On Jack Straw asking Pakistan to disown Taleban:
He expressed concerns about the policies of Taleban. I told him we have our concerns also. But, our view is that in order to nudge the government of Afghanistan in the direction that will serve the interests of the Afghan people the world community should engage them. By not engaging them, by painting them into a corner, you are not taking advantage of the influence you may be able to exercise on them. We have relations with the Taleban. We tried with the statues of Bamiyan. We did all we could. General Musharraf sent messages, General Musharraf sent a Minister to talk to the leaders of the Taleban government. But the Taleban government made a decision they thought was in the best interests of their country.

On whether Jack Straw also talked about urging a return to democracy in 2 years:
No, he didn't say within two years. But he said the sooner the better. We are committed to the implementation of the judgement of the Supreme Court of Pakistan. The Supreme Court has given to this government a period of three years for the fulfillment of an agenda of reform and rectification. We are addressing this and we are very glad to note that the world community has watched with a degree of approval that Pakistan is emerging from the difficulties that has confronted it. Mr Straw also appreciates that. There is a problem that the Commonwealth Declaration of Harere restricts a period for an extra constitutional government to two years. This is the mismatch. Two years versus three years. We hope that the Commonwealth will show tolerance. Because, we have an agenda to address and we want to fulfill that agenda so that we will have a democracy that is sustainable that will rest on strong foundations, and the recurrent breakdowns that Pakistan witnessed between 1990 and 99.... This is our hope.

On whether Straw also urged Pakistan to sign CTBT:
No he didn't raise this subject. But the government of Pakistan is quite clear that the Test Ban Treaty is a good treaty and that we should take part in securing the entry into force of that treaty.. which means not only sign but the ratification by 44 states. And Paksitan is not alone in not signing and not ratifying. So we have time to go.

On Bush's alleged India-tilt: We hope that the government of the US will have relations with India and Pakistan. The US has shown great maturity since October 1999. The US realized that democracy in Pakistan had become dysfunctional and that Pakistan needed to undertake some reforms. President Clinton came .. I had two meetings with the Secretary of State, I don't have a feeling that Pakistan is being ignored or sidelined