Academic and activist, Yogendra Yadav, on the newly founded Swaraj India Party and the plans he has for its future 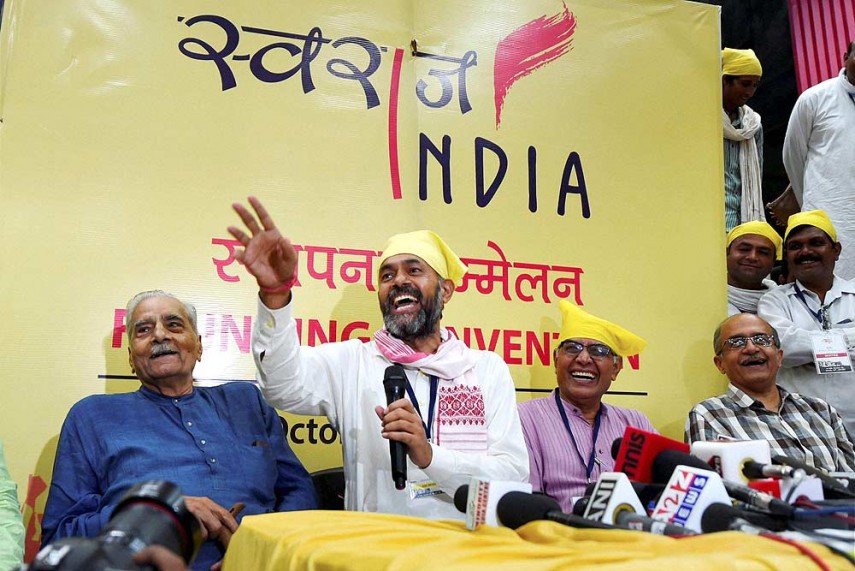 With the announcement of the Swaraj India Party, academic and activist Yogendra Yadav starts a new political experiment. After his falling out with the Aam Aadmi Party, he and lawyer Prashant Bhushan have thrown their energies behind their Swaraj Abhiyan platform for the last many months. On Sunday, they announced the formation of their new political party. Excerpts from an interview with Anoo Bhuyan.

Why have you decided to start this party? Why now?

People will interpret our decision, vis a vis the AAP. This is understandable. But it's not how we see it. There is a political vacuum in the country. AAP and people like us were trying to step into that vacuum. We were trying to do this even before AAP entered the scene. When we realized AAP is no longer on this quest, it made sense for us to leave and move towards truly alternate politics. This is not a sudden development-- we had announced on April 14 in Gurgaon itself, that we would continue our journey after leaving AAP, in a political way. We weren’t interested in the usual Indian drama of claiming to be an NGO not involved in politics. From day one, we said we are keen on politics.

Are you concerned that the perception of your new party might always be that you were set up primarily to oppose the AAP? How are you going to step out of this shadow and build something constructive on your own?

Those who follow our work would know that much of our work has nothing to do with AAP, its government or aims.

Our focus has been on two big things. Firstly, it is our concern for farmers, agriculture, drought and land acquisition. This has nothing to do with AAP or the areas in which it operates. Secondly, we are concerned with our anti- corruption drive, and have raised the issues of non- performing assets, helicopter purchases and the bail given to Shahabuddin.

With regards to directly opposing AAP, we have picked on issues such as that of the 399 liquor licenses which AAP has given out since coming to power, even though it promised ‘nasha mukt’ Delhi. We have also raised the jan lokpal issue with AAP.

So Swaraj Party faces a dilemma then. On the one hand, there are issues you want to criticise AAP on, but on the other hand, if you do, it will seem like your primary objective is to oppose AAP. How will you balance this? Are you intentionally going to try and not criticise the party then, in order to find your own voice?

We are opposing the entire political establishment at present. Sometimes AAP is on that radar. There is no dilemma here. We don’t want to be hesitant in talking about AAP, neither do we want to be obsessed with AAP. As and when they violate basic norms though, we will protest. But we are quite clear-- AAP is not what obsesses us.

We set two goals. One, we wanted to gather enough critical mass. Two, we wanted to develop the institutional mechanisms for transparency and accountability in our organisational functioning.

We thought it would take 6 to 8 months but it took us 15 months. In our July convention we fixed thresholds. We wanted to be present in 100 districts with duly elected committees and one-third of these needed to be present in at least 6 states. Now we have 130 district committees and our consolidated strengths are in Delhi, Haryana, UP, Uttarakhand, Bihar, Maharashtra, Karnataka and Telengana.

On the second front, we have set up lokpal, grievance committees, information officer, a transparent accounting system and other mechanisms for internal democracy.

These were our criteria for setting up a party. We met these criteria and we have set up our party.

What is the profile of people who are joining your party? Are many of them former AAP members?

It’s a mixed profile. A very large group is of those who came to the anti- corruption movement, including of AAP, got disillusioned and stepped back. These people are looking to us now, as the true inheritor of this mandate. This is a substantial section.

Many others are from social movements across the country who never aligned with AAP. The third group is of idealistic young people. They look at us from a distance and have felt that this is something worth trying.

What are your sources and plans for funding? What are the plans for transparency in this?

Funding is one of the biggest challenges. We have managed to raise funds from volunteers itself, enough to do routine work. 80% of us are volunteers. Hardly one or two people are paid for any work.

But for any mass activity we have faced problems. In our yatras, much of us worked hand to mouth. Now with the party formation, our challenge is definitely on how to raise money for elections which is honest and ethical. We are crowd sourcing and tapping into the public. These are plans but we don’t know how it will work out.

We don’t have a written policy. What we do have is a general policy that money will be scrutinized and transparent. Transparency itself will be the best filter.

Where are you targeting in terms of your first elections and campaigns?

We are yet to take a decision. At the moment, it doesn’t seem like we can significantly intervene in UP. Punjab, we will take an assessment once the situation of conflict right now settles down. Of the smaller states, Delhi is definitely a possibility. But we will set our thresholds and won't just contest anywhere and everywhere.

Can you explain why you are using the terminology of ‘swaraj’? In India the term comes loaded with meaning and symbolism from the freedom movement. Here, what are you seeking swaraj from and for what?

All of us have the memory of this term from the 20th century lexicon, where swaraj meant that the British should leave the country and we should have total independence. But this was Swaraj 1.0. For us today, we are talking about swaraj 2.0. Swaraj is the summation of India’s ideological journey in the 20th century. And so it best captures what we have learnt from the left, feminist, environmental and dalit-Ambedkarite movements. It's an umbrella concept of learning from all our modern revolutionary movements. In the context of freedom, swaraj is understood as freedom from any kind of domination-- class, gender, caste, race, and nations. Its also the freedom to realize oneself.