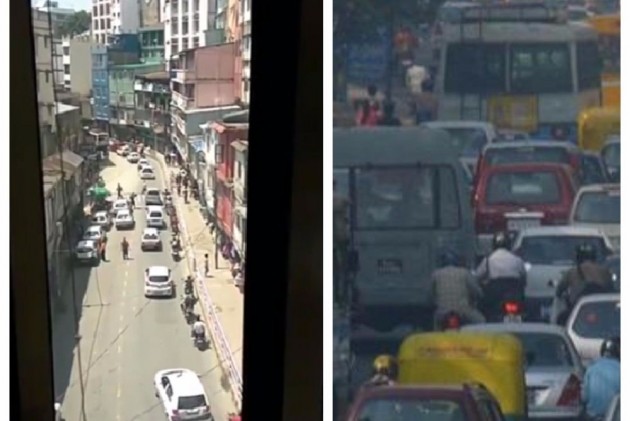 Videos on motorists observing extreme self-imposed traffic discipline in a narrow road in Mizoram, a sight extremely uncommon in most parts of India, especially Delhi, are going viral on Facebook.

The video shared online shows the commuters following traffic rules- cars, like ants in a line, stick to the left of their lane, two wheelers to the right.

None of the vehicles appear to take advantage of the vacant lane for opposite-side vehicles, adhering strictly to their side of the road.

Even more surprising in the video is that no traffic cop is seen directing the drivers to follow the basic rules, as is a requirement in other states of the country where forced discipline is a pre- requisite for smooth traffic on even the widest of roads.

The number of casualties in road accidents in the Capital is startling to say the least, most owing to the non compliance of traffic rules and the lethargy or corruption on part of some of the traffic police who let go of such culprits. Drunk driving too, constitutes as one of the reason.

According to a report, Delhi is one of the top cities with the highest number of Road Crash Deaths.

Mizoram, on the other hand, doesn't feature in the list at all. Possibly due to the difference in the number of vehicle owners which is much more in Delhi than in Mizoram. Still, the traffic discipline in the latter state has a lot to teach the drivers of the former.

Back in 2010, a group of journalists concluded a trip to Mizoram to analyse the surprising traffic discipline. They observed that Mizoram's roads were well off, better than its sister state Manipur. Mizoram also did not deal with the problem of vehicles parked on the roads which is often a menace,  since every Government offices and hotels have their own parking space.

Although Aizwal, the capital city, witnesses probably the most traffic in the state, strict traffic rules and an inherent discipline among the drivers prevent any mishap. Traffic Police are vigilant and smooth traffic is guaranteed together with the compliance of the drivers.

In this video from Aizwal shared recently, one can observe the perseverance of the commuters and the vigilance of traffic cops. Although there is no traffic light or even a proper division of the road, the whistle of the traffic cop and his hand gestures are enough to control the traffic. Peace is maintained, as nothing other than the cop's whistle can be heard. Cars are not deafening the people with incessant honks and drivers are seen halting their vehicles at a single gesture by the cop for pedestrians to cross the road.

In sharp contrast is the capital of the country. Carromboard driving has become a feature of Delhi.

Traffic rules violation add to the misery, with increased number of incidents of  traffic congestion and road rage, as against the more pacified roads of Mizoram where discipline among the drivers help in keeping traffic minimal and organised, as seen in the video shared online.