Far from being a literary virtual reality ride, or a voyeuristic zoo-train view of an exotic subculture, Lahiri's sensory details, like the surface patterns of a rivulet, suggest the contours of what lies below and behind the flow of her narrative. 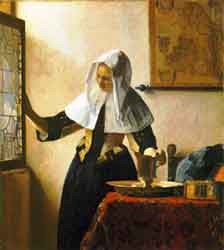 There is something about the 17th Century painter Jan Vermeer that seems to have held an unusually strong fascination for women novelists in recent years. In 1999-2000 his work was the focus of books published within the same twelve-month period by three different women -- Girl with a Pearl Earring by Tracy Chevalier, Girl in Hyacinth Blue by Susan Vreeland, and Circles of Confusion by April Henry.

Having read two of the three, I really began to wonder what it was about his work that seemed so relevant to all three women. The immediate appeal of his small canvasses might seem to be his concentration on domestic scenes, or his mastery of color, light and texture -- velvet and satin you can feel, rich tapestries and carpets, the luminescence of a stained glass window. But there is another quality that draws us into his scenes -- a sense of the inner life of his subjects whose stories we do not know -- the half smile, the pensive look, the startled glance -- gestures that hint at complexities of emotion beneath his exquisitely rendered surfaces. Something akin, perhaps, to William Carlos Williams' famous injunction to modern poets -- "no ideas but in things".

Without the particular, the universal can't be experienced viscerally -- a point of view especially appropriate for our times when old archetypes and iconic images seem to have lost much of their power to touch us.

Jhumpa Lahiri's new novel, The Namesake, reminds me of a Vermeer painting. She writes in a quiet language that neither calls attention to itself nor invites the reader to wrestle with it, yet her eye for details and precise descriptions draw us into an almost tactile experience of her settings. Far from being a literary virtual reality ride, or a voyeuristic zoo-train view of an exotic subculture, however, these sensory experiences, like the surface patterns of a rivulet, suggest the contours of what lies below and behind the flow of her narrative, making our empathy for her characters more palpable.

Like Vermeer, also, she has chosen a limited canvas. Her tale is modest in proportions, the story of a first-generation Bengali-American boy and his family and their lives in the interstices between the land and culture of their heritage and the social ecology of their life in the US.

Reports from the front lines of twenty-and-thirty-something Americans of South Asian descent indicate that Lahiri's representation is spot on in its particulars -- the family and community gatherings watching TV with other kids and "eating watered-down curry off paper plates" while parents converse loudly "in the Bengali the children don't speak among themselves," the trips "home" to a strange country, the every-other-Saturday Bengali lessons taught in a friend's house from "hand sewn primers brought back by their teacher from Calcutta, intended for five-year-olds, printed, Gogol can't help noticing, on paper that resembles the folded toilet paper he uses at school". All carefully chosen details that bring the reader right into the settings along with her characters.

The armature on which the story is built is the unusual name of the protagonist, Gogol -- an accidental naming forced on his parents by the need to put something on his birth certificate before bringing their newborn home from the hospital.This hurry-up attitude is bewildering to the young recently-arrived Bengali couple who were waiting for an official "good name" to be chosen by an older relative and who would have let his "pet name" -- the name used by family only -- evolve naturally in the intimacy of the home. When his father blurts out the name Gogol in the hospital, it comes to him as a blast from a crisis in his own past -- a past that he does not share with the namesake until Gogol, who has come to loathe and abandon the name, is a senior in college. The story his father tells only seems to heighten the boy's confusion. She writes:

"Gogol listens, stunned, his eyes fixed on his father's profile. Though there are only inches between them, for an instant his father is a stranger, a man who has kept a secret, has survived a tragedy, a man whose past he does not fully know. A man who is vulnerable, who has suffered in an inconceivable way."

And when Gogol demands tearfully to know why he has not been told the story before, we have the following exchange:

"It happened so long ago. I didn't want to upset you."

"It doesn't matter. You should have told me."

"Perhaps, his father concedes, glancing briefly in Gogol's direction. He removes the keys from the ignition. "Come, you must be hungry. The car is getting cold."

And suddenly the sound of his pet name, uttered by his father as he has been accustomed to hearing it all his life, means something completely new, bound up with a catastrophe he has unwittingly embodied for years. "Is that what you think of when you think of me?" Gogol asks him.

"Not at all," his father says eventually, one hand going to his ribs, a habitual gesture that has baffled Gogol until now. "You remind me of everything that followed."

As one whose own cultural adjustments had to be made in other directions -- US to Asia, Establishment to 60's counter-culture -- I can say that although the details are quite different, the conflicts of perception and adjustment he undergoes mirror many of my own experiences as well as those of lots of my friends. In this way, The Namesake seems to me a decidedly American book, this being a country always somewhat in flux socially, culturally, generationally.

What seemed to me particularly South Asian in her telling is less in the details, lush as they are, than in the tenderness she shows towards the individual members of the family in their longings, in the restraint of their expressions, and in their struggles to find their own individual spaces and identities across a double continental divide.

It is this gentle handling of Gogol and his parents that made this book such a pleasure for me to read. Yet it is in no way an overly sweet or sentimental portrayal. The family is imperfect, their problems difficult, Gogol's search for identity leading him down somewhat cold and convoluted paths at times. No easy answers are offered, yet the ending, which is by no means pat, points towards a future in which Gogol may find a way to incorporate his family's past into his identity without losing himself in it.

CJ Gillen, who lived in north India as a child and (much later) in south India as a married woman, now resides in Portland, Oregon, USA. This article also appears on SAWNET

Mohandas Vs. The Mahatma