A Test Of Character

Keeping in mind the Indian team's inconsistency in big events, I will be very happy to see the side figure in the semi-finals, for from there anything can happen. But realistically, that is going to be very tough. 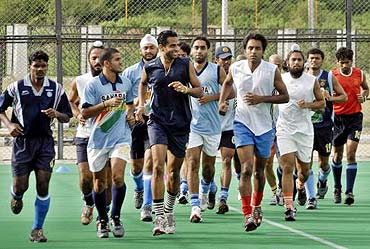 The hockey World Cup will be a real test of character for India who have been struggling to make a mark at the highest level of late.

Keeping in mind the Indian team's inconsistency in big events, I will be very happy to see the side figure in the semi-finals, for from there anything can happen. But realistically, that is going to be very tough. Yet, there is a chance of finishing in the top six, which to my mind is a decent finish.

Sure, India have one gold, a silver and a bronze, but it also needs to be borne in mind that all these three medals came in the first three editions of the World Cup and the gold came in 1975. Since then in nine editions, India have never figured on the podium and that is indeed a tragedy for there have been times when the team has indeed looked good. The fact is a team needs to get into the semi-finals to contend for a medal and India have not done that.

India have both Germany and Holland in their group, besides England, South Africa and Japan. They will need to make sure they beat the last three teams and ensure decent result against Germany and Holland to have a chance of making their first semi-final in more than 30 years.

This team will miss Sandeep Singh, for he was capable of pulling India out of a hole in a tense situation with his conversion through drag-flicks. With an unfortunate accident putting him out of action, his replacement Raghu will have a big responsibility, but he is not a drag flicker in the same mould.

I still remember one of my early heroes, late Surjit Singh being the star for India in the early editions of the World Cup and later we had Rajinder Singh, who was the leading scorer for India in 1982. Internationally, who does not know the contribution of Tanvir Dar or now Sohail Abbas's contribution to Pakistan or that of the legendary Ties Kruize and then Paul Litjens. Add to this great category the Argentine Jorge Lombi.

So the onus for India will be on Kamalpreet Singh and Dilip Tirkey, who will also be expected to take the set pieces.

A few days ago I met Gagan Ajit Singh and he looked confident. He said the boys were combining well and I hope they do so in Germany, too.

That brings me to India's first opponent in the 11th edition of the World Cup. India have always managed to draw a very strong opponent in their first game and that often sets the tone for the tournament.

The first opponent will be hosts Germany this time. We have often played them in first games. Though the teams are closely matched, the Germans generally manage to get the better. In 1992 Olympics, we lost 0-3 and after that we were always fighting to find our confidence.

So our first match against Germany will tell us a lot in which direction we are headed this time. The hosts, who could not manage to win the World Cup football on home soil, will be aiming to set that right in hockey. They are an extremely fit, aggressive and skilful side and India will do well to keep them in check.

Pakistan have a great World Cup record with four wins, the maximum by any side, but of late they have struggled which is why Sohail Abbas is back. The Dutch with Teun de Nooijer, one of the finest forwards in the world today, besides the likes of Ronald Brouwer and Roderick Weusthof start as favourites. And they also have Jerome Delmee and Taeke Takema, which makes them a solid side.