India confined themselves into a defensive shell and allowed England to dominate so much that it was embarrassing. India did not just lose the match, they might have lost some of the respect that our teams get inspite of slipping from the podium deca 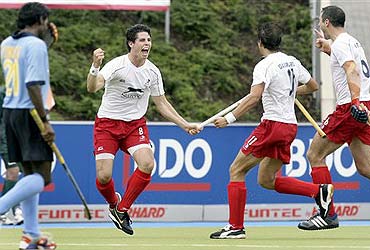 India's performance in the World Cup match against England was a big blow to our hockey reputation.

Leave alone the 2-3 loss and the fact that two defeats at the start of the tournament have virtually wiped away India's chances of making the semi-finals after three decades. What stood out like a sore thumb was the Indian team's reluctance to attack and total failure on all fronts. England attacked like never before. I have never seen them play such attacking stuff.

I also felt India underestimated England, which can be disastrous in a competition like the World Cup where every team is strong, simply because they come through a tough qualifying process.

We lost 2-3 for the second time in two days. But that score did not mean it was a close match. India even led in the first half, but that was simply because England missed two penalty strokes. Imagine what the scoreline would have been and how the match would have panned out if England had converted them.

India got the first goal through Shivendra Singh against the run of play in the 28th minute and with England missing two strokes, led 1-0 at half time.

In the second half, James Tindall and then Simon Mantell (2) converted in a span of less than 10 minutes and India's misery was complete.

Dilip Tirkey scored a consolation goal to make it 2-3, but there was no doubting England's dominance.
I feel there were too many mistakes in the defence, especially from a player like Kanwalpreet Singh, who was the reason why India gave away the strokes and a penalty corner. One simply cannot afford so many mistakes.

The hesitant, defensive posture for the better part of the match presented Indian hockey in a different picture from the one the world has known them for. The inclination to attack was missing till too late. By then, England had seized the momentum.

Altering strategy to suit the requirement of matches is fine, but allowing the rivals to dominate play without putting up a fight is not something that the hockey fans at home will easily digest.

For a better part of the contest, India confined themselves into a defensive shell and allowed England to dominate so much that it was embarrassing. India did not just lose the match, they might have lost some of the respect that Indian teams get inspite of slipping from the podium decades ago.

I cannot figure out the logic of testing the opposition by allowing them repeated penetration into the Indian striking circle. Lapses inside the scoring zone can make even modest opposition push you to the limits and England's display in this encounter showed they had the hunger for success that India lacked.

India lost the game in the midfield, where it allowed England to dominate the crucial link.

The soft-game approach seems baffling. There were very few signs of India's will to make a contest for midfield supremacy. England had a free rein and they capitalised on it to mount raids that made life difficult for Indian defenders.

It was not as if the half-backs were falling back to help the deep defence. India's half-line did not seem in play on this day. They squandered the gains from the previous match against Germany, in which the defending champions scraped to a 3-2 victory through a last-minute goal.

England would have been surprised to see India's defensive approach a day after they gave Germany a good contest in the opening match. One would have thought that India would attack with vigour against England.

India's half-time lead could be attributed to luck as England failed to capitalise on two penalty strokes. The Indian goal came against the run of play, and through some deft passing between Gagan Ajit Singh, Tushar Khandekar and Shivendra Singh.

When things are going your way, teams normally try and capitalise on the openings. They do not wait for the opposition to bounce back. But England was allowed the luxury of seizing control. It also helped that India was down to 10 players when England began their spree of three penalty corner conversions midway during the second half.

After two losses, the team management will need to work hard to motivate players and keep their morale high for the remaining games. India can still salvage some pride. But it is going to be an uphill task.

It was nice to see India name just one goalkeeper in the 16-man squad for the game. This allows an extra player to be utilised while using the rolling substitution rule.

Several top teams began this practice a while ago with beneficial results, although it carries a risk if the goalkeeper gets injured during play. But it is a risk top coaches are willing to take and underlines the faith they have in the goalkeeper being fielded.

A Metaphor For Life