In the past, relations between the US, India, and Pakistan were largely zero-sum. The events of March 25, 2005, however, ushered in a new era in which the United States can engage India and Pakistan simultaneously, instead of favoring one at the othe 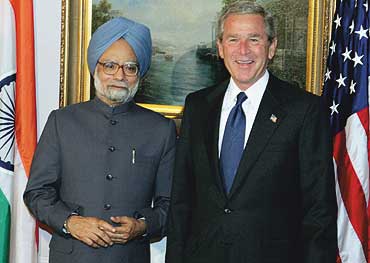 The forthcoming visit of India's Prime Minister Manmohan Singh to the United States will provide an opportunity to test the vitality of the US-Indian relationship. In particular, it will confirm whether the new US policy towards South Asia, first disclosed on March 25, 2005 when senior administration officials asserted that the United States had reached the decision "to help India become a major world power in the twenty-first century," represents the grand transformation in bilateral ties that has eluded both countries during the last fifty-odd years.

In boldly declaiming, in Secretary of State Condoleezza Rice's words, "that we're fully willing and ready to assist in th[e] growth of India's global power … which we see as largely positive," the Bush administration effectively gave notice that it would systemically decouple India and Pakistan in its strategic calculations. In other words, US relations with each state would be governed by an objective assessment of the intrinsic value of each country to US interests – rather than by fears about the effect on relations with the other. Far from disadvantaging India, as a superficial reading of the Bush administration's recent decision to sell F-16s to Pakistan could suggest, the new US policy is, in fact, intended to assist India in its ascent to great-power status.

A transformed bilateral relationship that makes the United States, as Rice put it, "a reliable partner for India as it makes its move as a global power" will ultimately advance America's own global interests in defeating terrorism, arresting nuclear proliferation, promoting democracy, and preserving a stable balance of power in Asia over the long term. Achieving these objectives, however, requires a new approach that translates the President's intentions into new policy initiatives, something Prime Minister Singh will be eager to judge for himself during his forthcoming visit.

The administration's new policy towards India thus far has had two major components. First, the administration has overcome its past hesitation to supply India with advanced defense equipment. Accordingly, it has permitted Lockheed Martin and Boeing to offer the Indian Air Force F-16s and F-18s, respectively, and has promised that the United States would support future Indian requests for defense systems. The administration has even intimated that the weapons and sensors it might provide India would be more advanced than those supplied to Pakistan. Second, and even more important for India, the administration has compressed the implementation schedule of the Next Steps in Strategic Partnership agreement previously reached with New Delhi, and has expressed its willingness to discuss a range of difficult and highly contentious issues through three separate, high-level dialogues on security, energy, and the economy.

The strategic dialogue will focus on global security issues, such as India's quest for permanent UN Security Council membership, future defense cooperation, high-technology trade, and space-related collaboration, as well as regional issues pertaining to security in and around South Asia. The energy dialogue will address energy security issues including the proposed Indo-Pakistani-Iranian gas pipeline and nuclear safety cooperation. Most importantly, participants will discuss ways of integrating India into the global nuclear regime so as to address New Delhi's desire for renewed access to safeguarded nuclear fuel and advanced nuclear reactors. The economic dialogue will aim at increasing US-Indian trade and creating new constituencies in the United States with a stake in India's growing power and prosperity.

Of course, cultivating this new relationship with India carries several risks for the Bush administration. First, supporting India's acquisition of nuclear and space technology could undermine the international non-proliferation regime. While providing such technologies would give New Delhi incentives to control outward proliferation in perpetuity and join with the United States in interdicting proliferation wherever it occurs worldwide, Washington cannot simply jettison the global non-proliferation regime that it has assiduously built over the last several decades. Instead, the administration is faced with the challenge of how to selectively apply this regime in practice, spawning what Richard Haass once termed "a proliferation of proliferation policies," in which countries are treated differently based upon their value to the United States. Given India's importance for the success of US non-proliferation goals and other geopolitical objectives, treating New Delhi as an exception to the strictures of the non-proliferation order is long overdue.

Second, the new administration strategy carries with it the risk of provoking China, which could view closer US-India ties as a means of polite containment. This is another issue Washington will have to manage prudently – but without apology. The United States should always consider the new US-Indian ties in terms of its own interests, rather than in light of potential Chinese displeasure. In fact, given the violent history of rising powers, the US might need partnerships with other Asian states to counter growing Chinese capabilities, which even today directly threaten the United States and its allies. Deepened relations with Japan, India, and key allies in Southeast Asia will create structural constraints that may discourage Beijing from abusing its growing regional power. Even as Washington attempts to preserve good relations with Beijing – and encourages these rimland states to do the same – cultivating ties with these nations may be the best way to prevent China from dominating Asia in the long-term.

These dangers assume that the administration's new strategy becomes too successful for its own good. But the far greater and more likely danger is that the enhanced US-India relationship could peter out and atrophy. It is not lost on policy makers in New Delhi that, although certainly welcome, the latest US pronouncements about its desire to boost Indian power remain – at least for the moment – statements of intent rather than concrete policy objectives. Cynics within the Indian cabinet have privately pointed out that, while the new US approach actually provides Islamabad with airplanes, all that New Delhi has received thus far are eloquent words. Despite US willingness to co-produce military equipment, Indian leaders expect more liberal access to a variety of civilian technologies, such as nuclear energy, satellite components, and advanced industrial equipment. If the United States fails to provide India with such forms of assistance – capabilities it needs to increase its rate of economic growth and to become a major power – New Delhi's current tolerance of US defense sales to Pakistan could quickly change into outright opposition.

A rupture in relations with India would be a grievous failure because the new Bush strategy has the potential to be truly revolutionary both in Asia and beyond. In the past, relations between the US, India, and Pakistan were largely zero-sum. The events of March 25, 2005, however, ushered in a new era in which the United States can engage India and Pakistan simultaneously, instead of favoring one at the other's expense. This new framework is not only good for American interests – it has already yielded a visionary bilateral defense framework agreement – but also for the security of one of the most dangerously divided areas of the world.

When Bush administration officials announced that America would support India's rise to world power status, they also asserted, "We understand fully the implications, including military implications, of that statement." Let's hope that they do.

Ashley J. Tellis is a Senior Associate at the Carnegie Endowment for International Peace and served in the U.S. Department of State as senior advisor to the Ambassador at the Embassy of the United States in India. He is author of India's Emerging Nuclear Posture (RAND, 2001). This article appeared in YaleGlobal Online, a publication of the Yale Center for the Study of Globalization, and is reprinted by permission. Copyright © 2005 Yale Center for the Study of Globalization.

That Wake-Up Smell Of Coffee