A cart pulled by two bulls, each trying to go in a different direction - this metaphor exactly fits the Sri Lankan Government today. 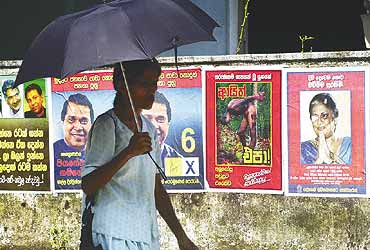 A cart pulled by two bulls, each trying to go in a different direction - this metaphor exactly fits the Sri Lankan Government today. President Chandrika Kumaratunga heads an executive that comprises a Cabinet dominated by her rival party, the United National Front (UNF), which heads a majority alliance in Parliament. The result is that that governance has sadly become a matter of conflict rather than consensus. Whether it is the peace process or state policy, the President and her party, the People's Alliance (PA), hold a position that is not congruent with the stand taken by Prime Minister Ranil Wickremesinghe's UNF Government.

This was illustrated, for instance, by the diametrically opposed positions the President and Prime Minister Wickremesinghe's administration took with regard to global trade. Commerce Minister Ravi Karunanayake, who represented the Government at the recent trade talks in Cancun, Mexico, broke ranks with the developing countries and backed the rich nations, especially the United States. In sharp contrast to this position, President Kumaratunga on October 14, 2003, addressing the World Economic Forum's East Asia summit in Singapore, blasted the rich nations, declaring, "The principles and underlying positions on trade must definitely be the same for the developed and the developing nations." This is not their only point of disagreement; the President and her party have condemned the Prime Minister's United Nations (UN) speech, which gave a tacit nod to the US invasion of Iraq.

The result of this two-way governance is that confusion reigns. The politics of conflict is not strange to Sri Lanka, but the politics of consensus certainly is. Neither politicians nor the body politic have sufficiently matured to nurture the politics of cohabitation, which is seen as the sine qua non for the progress of the peace process. An oft-repeated complaint voiced by the President is that she has been kept in the dark with regard to the peace process. The mutual suspicion the two parties entertain towards each other is giving birth to crisis after crisis in what has been described as a cohabitation miscarriage.

The opposition Sri Lanka Freedom Party (SLFP), the main constituent party of the People's Alliance, has already started a process to topple the Government with the help of the Marxist Janatha Vimukthi Peramuna (JVP) or the People's Liberation Front. A section of the SLFP believes that an electoral alliance with the JVP is the only way the UNF could be defeated at a general election.

The SLFP has never won a general election under its own steam. In the past it had always relied on the support of leftist parties to prop up its electoral strength. With the traditional left parties such as the Lanka Sama Samaja Party and the Communist Party being pushed into political oblivion, it is only on the JVP - a party that derives its strength from unemployed youths and is credited with significant organizational capabilities - that the SLFP can rely to ride back to power. However, the hitch is that the JVP is an ardent opponent of the peace process. It advocates a military solution to the North-East conflict and believes devolution of power is not the formula to solve the national question.

The first round of talks between the SLFP and the JVP collapsed recently largely due to disagreement over devolution as a solution to the ethnic problem, though moves are now underway to resume talks. However, it is still not clear how the two parties will iron out their differences over the devolution issue. In spite of this fundamental disagreement, they have intensified their campaigns, together and separately, against the Government's approach to the peace process. Both parties are in agreement that the UNF Government's approach to peace will eventually lead to the creation of Eelam, the separate state the Liberation Tigers of Tamil Eelam (LTTE) has been campaigning for.

The 20-month-old ceasefire, however fragile it might be, has contributed towards the growth of the economy. The stock market has made significant gains in recent months while the rupee has appreciated against the dollar. But ironically, the gains made on the economic front have not significantly buttressed the peace process. This is because questions arising from the uncertainties surrounding the peace process still remain unanswered. Fears that were expressed at the time the UNF Government signed the ceasefire agreement in February 2002 have still not been allayed.

On the contrary, the apprehensions have been consolidated by the LTTE's ceasefire violations, its intransigent stand with regard to contentious issues, especially the row over the Manirasakulam camp, its continued efforts to regroup and rearm itself and its scant regard for the opinion of the international community and rulings by the ceasefire monitors. With regard to the Manirasakulam camp in Trincomalee, the LTTE has stood its ground, refusing to bow to the Sri Lanka Monitoring Mission ruling that the rebels had set up the camp in a Government-controlled area, which was not long ago occupied by Muslims.

The LTTE's disdain for the international community as far as the ground reality is concerned was also seen in its continued conscription of children despite the assurances it gave to the United Nations Children's Fund (UNICEF). Recently, the LTTE released about 40 child soldiers for a UNICEF-sponsored rehabilitation programme, but before the ink on the papers they signed was dry, some 40 parents in Valachchenai, an eastern town close to Batticaloa, complained to the UNICEF that their children had been abducted by the LTTE.

Besides, the LTTE is also known to have acquired modern weaponry during the 20-month-old truce, a fact Defence Minister Tilak Marapana grudgingly admitted in Parliament during an adjournment debate on the security situation in the country.

"It is true that, with the ceasefire agreement, many opportunities have been afforded to the LTTE to strengthen itself. But that I believe is the price we have to pay if we are to pursue the peace process to a permanent solution of the problem. We knew that when we signed the ceasefire agreement," Marapana told Parliament in response to an opposition tirade against the Government's soft approach to the LTTE's confidence-shattering measures.

The UNF Government's never-say-die approach to the peace process, in spite of LTTE intransigence, is commendable, for it has helped keep alive the hopes of reactivating the negotiations that were suspended in April. It is against the backdrop of this optimism that Prime Minister Wickremesinghe this week told the Foreign Ministers of the Indian Ocean Rim countries that the very fact that the LTTE was presenting its counter-proposals to a Government draft on the creation of an interim administration for the Northern and Eastern Provinces was itself an achievement in the ongoing peace process.

The LTTE's constitutional affairs committee, which met recently in Dublin, has apparently finalized its counter-proposals to be handed over to the Government by the end of this month. Although the contents of the counter-proposals have not been made public, sources close to the LTTE say that the Tigers were insisting that police, land and financial matters should be exclusively vested in the LTTE-dominated interim administration.

The Government may not fully agree with the LTTE counter-proposals, but this will offer the two sides an opportunity to sit together and iron out or minimize their disagreements. One cannot be over-optimistic, however, given the other factors that are directly linked to the ethnic question. For instance, fears entertained by Muslims about the interim administration have not been allayed, either by the Government or LTTE. The LTTE's continued harassment of Muslims is giving rise to a situation that may lead to Muslims taking up arms to defend themselves and even President Kumaratunga has warned of this eventuality.

'What We Need In Dealing With Pakistan Is Patience'