It is darkness everywhere. Only people’s anger can dissipate this darkness. Where is that anger? 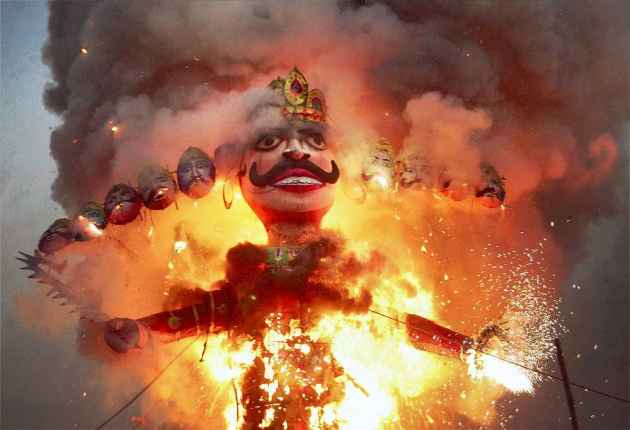 This has been a Dussehra like no other since we became independent in 1947.

Our dreams of emerging as an Asian power on par with China have received a set-back.

Everything about us seems to be in a bad shape--the state of politics, the economy, the administration, the style of governance.

There is talk of corruption everywhere, in everything.

The people’s faith in the political leadership has been badly shaken.

The success of a democracy depends on its people and its political leadership.

If the political leaders come to be viewed by growing numbers of citizens as a pack of self-serving, unprincipled and opportunistic money-makers, democracy suffers.

The nation suffers even more.

India presently has the most uninspiring leadership it has ever had.

Leaders with no pride in the country.

Leaders with no principles.

Leaders with no qualms of conscience.

Leaders with no sense of political morality.

It is so in the Congress which is now headed by a set of leaders who will make our greats of the past like Mahatma Gandhi, Jawaharlal Nehru, Rajaji, Vallabhbhai Patel etc shed tears in heaven.

It is so in the BJP which has become a party of opportunism and cynicism.

It is so in other political formations.

It is so in the civil society.

When Anna Hazare made his appearance in New Delhi last year and took over the moral leadership of not only India Against Corruption, but also India of The Common Man, we all thought we are going to be born again Indians full of pride and hope for the future.

Anna’s moral crusade has lost its momentum and its moral fervour.

The virus of cynicism and political opportunism has infected his followers too.

As we wake up every morning, what we see on the horizon is not messages of hope and good cheer, but forebodings of more bad things to come.

More allegations, more scams, a further weakening of the moral fibre of our society.

Anything goes. That is our driving force.

People like Mr Robert Vadra, son-in-law of Mrs Sonia Gandhi of Italian origin, and Mr Nitin Gadkari, son of the soil who heads the BJP, are not exceptions to the rule. They are the rule of wheeling and dealing.

Look at the way they have been unabashedly stonewalling demands for the truth, for their explanations on the allegations against them. .

By failing to insist that Mr Vadra account for his huge wealth and remove the suspicions of the people, Mrs Sonia Gandhi has let herself be suspected as a possible accomplice through silence and inaction.

She has made the Congress that won our independence look no different from unscrupulous political parties of Italy in which anything goes.

By failing to enforce standards of rectitude on his ministers and officials, the Prime Minister Dr Manmohan Singh has made himself be suspected as an equal accomplice.

By failing to insist that Mr Gadkari quit the leadership of the BJP and satisfactorily reply to the allegations of wheeling and dealing of the worst kind indulged in by a political leader, the BJP and the RSS have forfeited their claims to be seen as parties with a difference.

By surrounding himself with aides of dubious credentials, Mr Arvind Kejriwal of IAC has lost his moral authority to lead a new self-rejuvenating movement with a difference.

It is darkness everywhere.

Only people’s anger can dissipate this darkness.

Where is that anger?