Falling behind South Korea and Pakistan was bad enough and now it is even Japan. And there will also be Malaysia to contend with in the Asian Games. The Indians must wake up now. 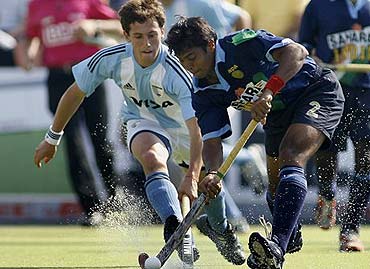 The Indian hockey team's performance in the World Cup is bitter to swallow. Far from fighting to be the best in Asia, the team is now fourth among the continent's challengers. While Korea, who made the semi-finals are now the standard bearers for Asia, Pakistan managed to stay in top six.

Japan finished ahead of India, as they first beat South Africa and then Argentina in the minor placings to finish ninth. India lost to Argentina, but in the clash for the 11th and 12th spots, India barely managed to avoid the last position embarrassment by beating South Africa 1-0.

Falling behind South Korea and Pakistan was bad enough and now it is even Japan. And there will also be Malaysia to contend with in Asian Games. The Indians must wake up now. While this is a wake-up call for the whole fraternity, there should be somebody up there ready to take the blame for this pathetic fall.

Now, all eyes will be on India's show in Doha Asian Games. This pathetic performance, coming less than three months before the Asian Games, will keep the Indian players under intense pressure.

Averting the wooden spoon, India just managed to ensure that they were not eliminated from the Champions Challenge competition. Who would have thought that there would indeed be a time, when India would feel relieved at not being pushed out of even International Hockey Federation's second-rung event, the Champions Challenge. This lone win in India's entire World Cup campaign cannot make up for the terrible blow to our standing in international hockey that has plunged over the years.

A defeat on Sunday in the playoff for the 11th and 12th positions would not just have eliminated India from the Champions Challenge lineup next year, but also pushed it into oblivion. In that context, this 1-0 victory over South Africa was a minor consolation.

The Indian strikers continued to be erratic in the match against South Africa. It reflected the jitters prevailing in the Indian camp that the only goal of the match came in the 54th minute despite their extended domination of the contest.

Eventually, Rajpal Singh's deflection off a penalty corner shot by Dilip Tirkey saved India from the humiliation of a bottom-place finish among the 12 countries.

But India remained on the tenterhooks as they failed to convert several more chances and hung on to the slim lead, something that they had not been able to do earlier in the tournament.

Tejbir Singh came close to sealing the victory two minutes from the hooter, but he shot wide and fortunately the Indians did not succumb to their last-stage blues.

I'm rather surprised to see the jitters that the Indian defence has been experiencing during the World Cup. One would have thought that their international exposure ought to make them used to such situations.

On a different occasion, the same team might give a more composed display. One thing that stood out in their last match was the way the players made some good interceptions and created space upfront. But the strikers wasted the good work by hanging on to the ball for too long.

India would not have been in the situation of playing to avoid the last spot had they been able to convert their chances in Saturday's contest with Argentina, a game where the Indians dominated the first session before allowing the rivals to bounce back.

Most teams are now aware that they cannot afford to relax after scoring a goal these days as the speed of contemporary hockey can transform the game in a matter of minutes. But India squandered their chances against Argentina when they failed to capitalise on the early lead provided by Arjuna Halappa.

India faced a similar situation when they wasted several scoring opportunities and relaxed their grip on the game and allowed Argentina to hit back. Three penalty corner conversions from the Argentines -- two by Matias Vila and one from Matias Parades --had India on the mat despite Rajpal's goal that tied the scores 2-2 midway in the second session.

While India was suffering the pain of being pushed to the playoff for the wooden spoon, another Asian side, Japan lifted their performance to hand down a 5-2 defeat to South Africa. That took the Japanese team a level ahead of India.