From atop the Dhauli Hill, the highest point in the region around Bhubaneswar, the view

is picturesque – a lissome river meandering lazily through lush green paddy fields. As you savour the scene, remember that you’re probably gazing at the site of one of the oldest battles known in Indian history – the Kalinga War in the 3rd century BC that transformed Ashoka the Conqueror into a great pacifist monarch.

The most distinguishing feature of this city is the abundance of magnificent temples that showcase the architectural excellence of Odia sculptors.

The Bhubaneswar of today lacks the aesthetics of its previous avatar. The new parts of the city came up when it became the new capital of Odisha, taking over from Cuttack. This modern capital has been developed by engineers and architects with a clearly utilitarian ethic, and can appear somewhat soulless.

Temples
Legend has it that there were originally 7,000 temples in the city, built over 700 years. Only 600 have survived the ravages of time and iconoclasts. They can be divided into three loose clusters that can be explored on foot.

Tip With the exception of the Raja Rani Temple, entry to all Bhubaneswar temples is free

Tip Non-Hindus are not allowed inside the Lingaraja Temple

Carvings in the Raja Rani Temple

The Raja Rani Temple Cluster
The Raja Rani Temple, also from the 11th century, stands in splendid isolation amid well-manicured lawns. Incidentally, the name of the temple has nothing to with any king or queen; it refers to a type of sandstone locally called rajaraniya.The carvings, wonderfully baroque and indulgently sensuous, are stunning.

Nandan Kanan Zoological Park
Acclaimed as one of the most well-maintained zoos in India, Nandan Kanan is an open-air zoo carved from natural forests. The zoo also includes a botanical garden. Both are separated by a lake and spread over a scenic landscape of several hundred acres. Because of amenities such as wheel chairs and battery-operated vehicles, the zoo bustles with visitors. However, the botanical garden is an oasis of calm and serenity.

Museums
The Odisha State Museum has an amazing collection of palm leaf manu-scripts. The oldest manuscript here dates back to 1690 – 80 different folios make the Geet Govinda, an important work in the Krishna Bhakti tradition, by the 12thcentury poet Jayadeva.

The Regional Museum of Natural History exhibits skeletal remains of animals, information on endangered species and photos of wildlife sanctuaries of Odisha. The gigantic egg of an elephant bird (now extinct), sourced from Madagascar, is a rare exhibit.

Pathani Samant Planetarium
Named after a famous astronomer, the planetarium has regular shows and special programmes such as night sky watching. Light, sound and water shows are held from October to June.

Ekamra Kanan
Also known as the Regional Plant Resource Centre, a vast expanse of green lawns, flower gardens and a lake provide much succour during sultry summer evenings. Major attractions here are the migratory birds, a children’s park, boating and a musical fountain. However, the main park is open on all days (8.00am–7.00pm).

Ekamra Haat
Browse through stalls selling ethnic handicrafts. Terracotta, crafts and handloom exhibitions from other states are held throughout the year. A couple of food kiosks serve Odia snacks and meals too.

Dhauli
Dhauli is where Ashoka was overcome with remorse in the aftermath of the Kalinga War. He embraced Buddhism and spent the rest of his life spreading the message of non-violence.The famous rock edicts (dated to 257 BCE) here describe Ashoka’s philosophy of life. One can also visit the Shanti Stupa atop Dhauli Hill and enjoy the splendid view of the Daya River winding its way through paddy fields.

Tip There is no show on Monday

Udayagiri and Khandagiri Caves
The multi-tiered rock-cut caves of Udayagiri (ancient Skandagiri) and Khandagiri symbolise Jainism’s cameo in Odisha’s historical drama. Comm-issioned by the great Jain king Kharavela, they were meant as dwellings for Jain monks. Cave 4 or Rani Gufa in Udayagiri is a two-storeyed structure with attractive sculptures. Cave 10, Ganesh Gufa, has a statue of Ganesha and two elephants. Khandagiri is disappointing, with disintegrated statues of Jain Tirthankaras.

Where to Eat
Several places in Bhubaneswar serve an authentic Odia meal: Dalma, near Nicco Park, Odishi at Bapuji Nagar, Swastik Plaza and Mayfair Lagoon (both near Nayapalli) and Hotel Crown in Nayapalli. Chandni, at the Trident, is expensive for the city but worth the cost. For vegetarians, Hotel Harekrishna is often the best bet. About 12km away, en route to Cuttack, is the Kalinga Sweet Market at Pahala village – a row of roadside shacks selling superb Indian sweets.

When to go October–March

Air Bhubaneswar Airport is connected to all the metros and many major cities
Rail Bhubaneswar Jn is linked to Kolkata, Chennai, Delhi and many more
Road Long drive from Kolkata (420km/ 10hrs) but it’s smooth highway driving
Bus Overnight buses are available from Kolkata. There are state transport bus services connecting Bhubaneswar to all cities of Odisha 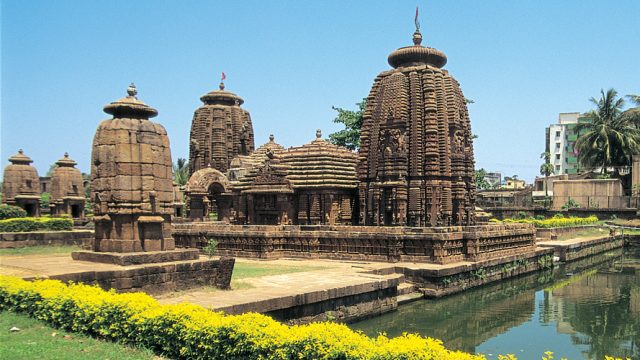