Home » Hotels » Of Royalty, Heritage and Beauty In Jaipur, The Pink City

Sixteen years after Jaipur was founded in 1727, a Jesuit priest Jose Tieffenthalar visited the

city, and was suitably charmed by it. “The city, while it is new, is assuredly the most beautiful among the ancient cities of India… [it] has the splendour of the modern, with equal wide and long streets.”

Centuries later, the walled city of Jaipur lives up to its reputation as a planned metropolis for the most part: its enchanting bazaars bear their heritage with pride, its perfectly laid-out streets are easily navigated and the uniform pink hue of the ancient city walls as well as the grand, regal monuments evoke a flamboyant past.

Sawai Jai Singh II, Jaipur’s founder, belonged to the Kachhwaha Rajput clan, which emerged as a strong force towards the end of the 16th century, when Man Singh I established the Amer (Amber) Fort in 1592. The Kachhwahas consolidated their power via marital relations with the Mughals; in fact they provided Akbar some of his best generals. The Sawai, after whom the city is named, felt the need to find a more appropriate capital for his kingdom owing to an increase in population and a resulting scarcity of resources. Construction of this new capital began in 1727 according to the principles of Vaastu and Shilpa Shastra, scientific traditions of Indian architecture. Thus the city came into being.

Amer Fort offers sweeping views of the city of Jaipur

Even though it is widely considered a perfect embodiment of the bygone era, the Jaipur of today doesn’t wish to be left behind in the race towards modernity. It seeks a balance between the modern and the ancient, between gleaming malls and resplendent palaces. Indeed, it’s this heady and sometimes puzzling mix that is at the core of Jaipur’s appeal to a visitor. There is not one Jaipur, but two cities that reflect the vivacious blend of the new and the old. Behind Jaipur’s iconic pink fortification, you will find the original, planned heritage city that dates to the 18th century. Outside the walls is the 21st century urban area, with spanking new multi-storeyed buildings, malls, call centres and fast-moving traffic. The two Jaipurs make for an intriguing contrast: one that many books have lauded in superlatives, and the other that you discover as you go along.

Jaipur lies between Amber and Sanganer and the distance between the two is 26km. The railway station and the bus stand are both located to the northwest and lie within a kilometre of the centre of the city. The airport is 14km south of the city centre. Transport, in the form of scooters, cycle rickshaws and prepaid taxis, is readily available. It’s advisable to fix the fare for both rickshaws and scooters before you hire one as they do not always run on meter. For sightseeing, it’s best to arrange a taxi through your hotel.

Apart from the major monuments that are located within the walled city of Jaipur, the forts of Amer, Jaigarh and Nahargarh are unmissable for tourists. A visit to the forts will take up an entire day.

When Jai Singh felt the need to move his capital from Amer to a bigger city, he called upon the best available talent. The Bengali architect Vidhyadhar Chakravorty formalised the new city’s plans according to a grid system. After dividing the city into nine blocks, or chowkries, and laying down wide and straight streets, he encircled it by a formidable wall.

Buy a puppet in Jaipur’s bazaars

As Jai Singh had the city map before him, it was an easy task for him to allot a different area for each trade. Two of the chowkries, taking up about one-seventh of the total area, were allocated to build the palace complex. The other seven blocks were given equal attention, with pretty buildings lining the streets.

When you set out to explore the city, keep this pattern in mind for a better understanding of the location of the more interesting areas. Chowkri Sarhad was the palace block with temples, gardens and other royal buildings; Purani Basti was earmarked for courtiers’ residences; Topkhana Desh was for the thikanedars, or the chiefs of the state’s divisions; Chowkri Modikhana-Vishveshwarji was for Jain and Hindu businessmen and other officials; Ghat Darwaza was for merchants, though artistes occupied certain parts; and Chowkri Ramchandraji had temples and havelis built by royalty. These chowkries were further divided into smaller wards and sub-wards.

The least developed were Topkhana Hazuri and Chowkri Gangapol as these were later additions. The city had seven major gates (seven was considered an auspicious number), similar in design, with a large central opening flanked by two smaller ones on either side. The gates are called Suraj Pol, Chand Pol, Ram Pol, Shiv Pol, Kishan Pol, Ganga Pol and Dhruv Pol.

The main bazaars are located within the walled city. The area opposite Hawa Mahal forms the Sireh Deori Bazaar, which has shops selling colourful textiles, light quilts, leather footwear, jewellery and other handicraft items. All the markets are located around the two main city blocks, or chaupars. Just after Hawa Mahal is the main square called Badi Chaupar, which leads to some interesting bazaars such as the Ramganj Bazaar to the east, where you can see leather shoe-makers at work. To the west is the Tripolia Bazaar, known for its steel and brass utensils.

Johari Bazaar, south of Badi Chaupar, is famous for bandhani and block-printed textiles. Some of the city’s most well-known jewellers have their showrooms here. To see the famed meenakari artisans, gem-cutters and polishers at work, head to Gopalji ka Raasta and Haldiyon ka Raasta, just off Johari Bazaar. The other import-ant square is Chhoti Chaupar, with very many bazaars surrounding it. To the north is Gangauri Bazaar, which may not have too many touristy things but is still an interesting place to explore, mainly because there has been minimum modernistic intervention here.

Elephant rides up to Amer Fort

Towards the east is the other end of Tripolia Bazaar (it starts from Badi Chaupar), with its metal shops. At a small lane called Maniharon ka Raasta, off Tripolia Bazaar, you can watch lac bangle-makers at work. To the south is Kishanpol Bazaar, which has wood cots, jute strings and silver items. To the east is Chandpol Bazaar; and Jaipur’s marble workers and painters are to be found at the Khazane Walon ka Raasta here. The other two markets within the walled city are Bapu Bazaar and Nehru Bazaar. The upmarket shopping area Mirza Ismail Road (MI Road) lies just outside the city wall.

Located about 10km north of Jaipur, Amer was the capital of Kachhwaha Rajputs for 700 years (1037–1727) and is a beautiful, almost golden fort-palace that tops the city. The fort here was established in 1592 by Man Singh I and successive rulers added to the majestic structure. The fort looks stunning reflected on the surface of the small Maota Lake. You can walk up, or take an elephant ride, which takes 10 minutes. It’s also possible to drive up from the rear portion of the fort.

There’s a lovely sandstone Diwan-e-Aam and near it, the Sattais Katcheri, a colonnade of 27 pillars where scribes sat. The brilliantly-hued gate Ganesh Pol is magnificent. The elegant floral ceiling of Jas Mandir and the tiny mirrors producing a starlit effect at Sheesh Mahal, the Sukh Niwas and the Jai Mahal are star attractions.

Palace architecture in Rajasthan is simple in design, elaborate in execution and magnificent in appearance. The City Palace complex, an integral part of the walled city, is a fine example of this pattern. It is a sprawling enclosure with many courtyards, gateways and gardens.

Today, the former maharaja and his family occupy a part of the City Palace. Enter from Atish Pol, and go on to Mubarak Mahal, which has an exquisitely decorated marble and sandstone exterior. Designed by Sir Swinton Jacob, it was originally a royal guesthouse that was turned into the Mahakama Khas or Royal Secretariat. It is now the Maharaja Sawai Man Singh II Museum, one of the finest museums in the city, with a display of costumes, weapons, miniature paintings, rare manuscripts and other historical memorabilia. One part houses the Toshakhana or the royal wardrobe section. The other part is the Pothikhana or the manuscript section.

North of the Mubarak Mahal is the Sileh Khana, believed to have been part of the Department of Music and Dance. It now houses an armoury.

Portraits line the upper walls of a room in City Palace

Located on a raised platform in the inner courtyard is the Diwan-e-Khas, a simple structure where an impression of intricate design has been created by the clever use of pink and white colour on its walls. It is a large, pillared hall with rows of elegant marble pillars and arches, which was used during ceremonies. The highlights here are the two silver water containers, the largest in the world, mentioned in the Guinness Book of World Records. Sawai Madho Singh II took along these containers, after filling them with water from the Ganges on a trip abroad to avoid having to use ‘foreign water’.

Diwan-e-Aam, the hall of public audience, is an enclosed area where durbars and ceremonies were held. Built by Sawai Pratap Singh, this huge hall has painted walls, cut-glass chandeliers and massive marble pillars. It houses the king’s collection of miniature paintings, manuscripts and carpets.

The Pritam Niwas Chowk is an enclosed courtyard where dance performances were held. Built by Pratap Singh, its four beautifully painted gateways represent the four seasons.

Sawai Jai Singh II was famous for his love for astronomy. Located just outside the City Palace, his Jantar Mantar Observatory, completed in 1734, has an extraordinary collection of astronomical instruments. This one is the largest and the best preserved of the five observatories that he built across the country.

Also called the Palace of Winds, Hawa Mahal is the most widely recognised monuments of Jaipur. Sawai Pratap Singh (1778–1803) built this rather unusual palace in 1799. Curiously, all ornamentation is confined to the rear portion of this five-storey structure. The façade has semi-octagonal overhanging windows with perforated screens, curvilinear roofs, domes and finials. So, the building feels not like a palace but just a façade. It has 953 ornate sandstone windows said to have been used by royal women to watch street processions through the perforated stone screens.

The literature festival is held at Diggi Palace every year

Nothing quite beats accommodation in Jaipur as far as princely comforts are concerned. It is, after all, a city of palaces, and this is manifest in the vast choice of heritage options it offers. While the likes of Rambagh Palace (Tel: 0141-2385700; Tariff: ₹25,650–8,52,750) and Jai Mahal Palace (Tel: 6601111; Tariff: ₹23,000–85,000), of the Taj Group, belong to royal families, equally interesting are the comparatively modest townhouses of the aristocrats who served in the royal courts.

Of the forts Sawai Jai Singh built on Jaipur’s outskirts, Jaigarh was built in 1726 and was once the royal treasury. Jal Mahal is an 18th-century palace on the Man Sagar Lake on Amer Road. It is being opened to the public after 300 years following a major restoration (see W jaltarang.in).

Held at the end of January every year, the Jaipur Literature Festival (W jaipurliteraturefestival.org) has hosted the likes of Salman Rushdie, Wole Soyinka and Ian McEwan. Diggi Palace hosts the festival on its sprawling grounds. All talks, readings, films and workshops are free for the public.

When to go October to March, and during the monsoon 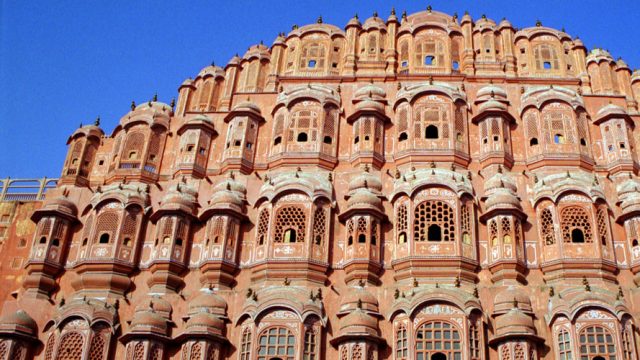 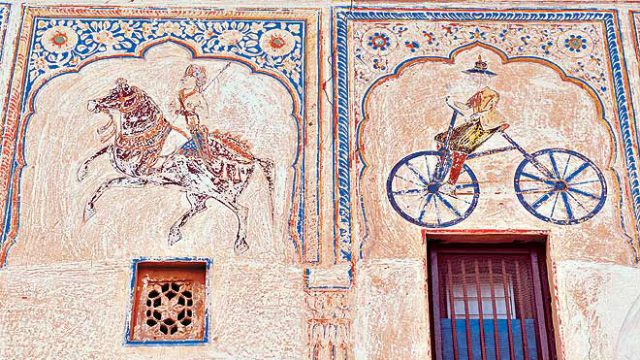 Be treated like royalty while you whiz past the shifty sand dunes or look to the numerous forts of a heady dose of history, here’s why tempts tourists in Rajasthan 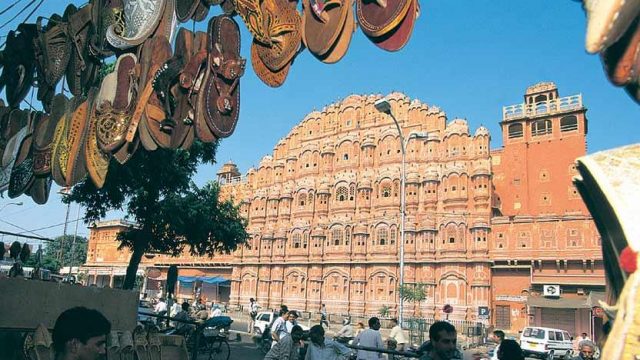 The charms of Jaipur’s Hawa Mahal

Its wafer-thin faÃ§ade once the protector of a raja’s harem, the Palace of Winds feels like a ‘creation of whimsy’