Root Bridges of Sohra. Even though Meghalaya is home to many such bridges, only a few are known to the world outside. Out of these, the Umshiang Double Decker is the most popular but getting here is no mean feat. It is a 5-6 hour journey on foot, a trek to be precise, which includes climbing close to 6500 steps, both up and downhill. As if the steps alone weren’t enough to make the trek arduous, add to them two dangerously narrow shaky bridges, made of bamboo, iron cables and rods.

I started my journey from Sohra (also known as Cherrapunji) which is well-known for the amount of rain it receives each year, making it one of the wettest places on earth. The drive from Sohra to Umshiang took approximately an hour and a half, passing through lush, dense forests on bumpy, narrow roads. The drive was pleasant and the weather was slightly chilly. As I reached Umshiang and looked at the never ending flight of steps I was to climb down, the only thing I could think of was the climb back up. I started the descent with my group, led by Paradise, our guide.

It all seemed easy when we began—we were going downhill holding the rail, brushing past trees and flowers, spotting butterflies, crossing hamlets that looked right out of the Lord of The Rings. We made pit-stops to catch our breath, sip on water, but most importantly to capture the unmatched beauty of the place. Paradise kept us updated with the names of the small villages, customs of the tribes, and the history of the places we passed by. Most of the people I met on the way were locals, travelling to and from the village above for supplies, kids going to school, carrying baskets and bags on their backs with such comfortthat I began questioning my own level of fitness.

I came across the first bridge (not the living roots) which was built to cross a small river—it’s water, the most beautiful shade of turquoise I had ever seen. The bridge looked like it was ready to breakNarrow enough to let only person cross at a time, it was made out of bamboo and iron cables, swaying and shaking the moment anyone stepped on it. It took me a whole lot of courage to cross it without looking down. After half an hour of walking, I crossed another such bridge. Having crossed a similar one just minutes before did not make crossing this one any easier.

After walking for almost two hours, I finally reached the place of my dreams and I realised none of the pictures I had did justice to its beauty. Imagine looking at bridges sprouting out of tree roots—it was surreal! With a double-decker Living Root Bridge on one side and a small waterfall over an enchanting water body on the other, this place was magical.

I was too excited for words and just looked around gaping, marveling at the peace and quiet this place offered. The water body was so clear that I could even see the fishes swimming inside. . There was a very small village nearby and I noticed that most of the locals did not use the Living Root Bridges to get to the other side. Instead they used the normal path right next to the waterfall. On asking, I was told that these bridges are mostly used during monsoon, when the normal walking tracks get submerged in water.

After capturing the bridges from every possible angle, I just sat there, feet in water, lost in nature’s melodies. My reverie broke as I felt something nibble at my feet. Surprised, I looked in to the water and saw a school of fish happily nibbling at my feet. A free fish pedicure right in the middle of a jungle in the Northeast!

The way back was extremely tough since it mostly involved climbing up. Every single step felt like a drag and I had to take a break every few minutes to catch my breath. Every time I looked up, I saw nothing but countless steps. I wanted to give up and take shelter in one of the huts nearby but Paradise being a good trek leader egged me on. Finally after 3 hours of huffing and puffing I reached the point where we had started.

Upon reaching the top, I looked at the dense forest down below whose heart I had just touched—I couldn’t believe I had done it. Even with fatigue taking over me, I was glad I did not give up. I spent my journey back to Sohra browsing through all the images I had captured on this glorious journey.

History and Origin: The warm and humid Southern Khasi and Jaintia hills around Sohra are home to a particular species of Indian rubber tree which has an unbelievably strong root system. It also has a secondary root system that originates high up from the trunks. These secondary roots can easily roost atop big boulders or even in the middle of the rivers. A tribe in Meghalaya called the War-Khasis noticed this a long time ago and realized that these strong roots could be an easy way ofcrossing rivers in many places. These are what we now know as the Living Root Bridges.

The best thing about these root bridges is that they can be grown whenever and wherever the need arises. The Khasis use betel nut trunks sliced down the middle and scooped out, to create systems to guide the roots. The thin roots of the tree then grow without straying. Upon reaching the other side they are given time to take root in the soil and get sturdy. On an average a strong root bridge takes 10 – 15 years to become completely functional. Some of these bridges are over a 100 feet long and can easily support the weight of fifty or more people at one time. The older they are, the stronger they get! Some of these bridges are over 500 years old.

How to get there: Umshiang Double Decker Living Root Bridge lies in the state of Meghalaya. It is a trek and the starting point is approximately 45 km from the town of Sohra. The drive from Sohra to Umshiang takes about an hour and a half. Sohra is located at a distance of 54 km from Shillong by road, and undoubtedly makes for one of the most beautiful drives in India. 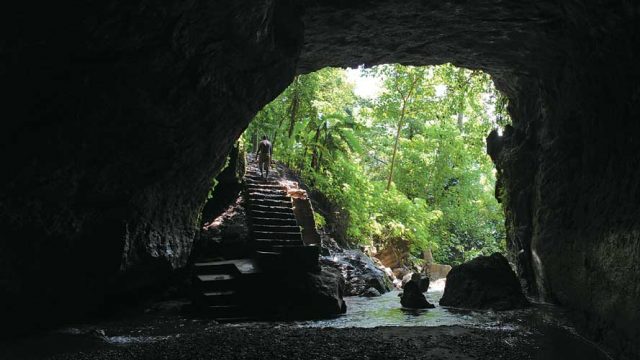 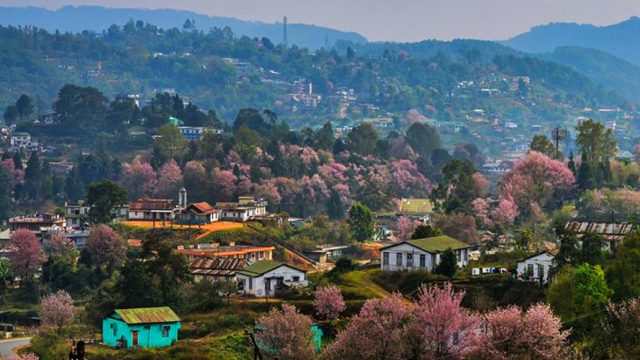 Still need a reason to visit Shillong? Go when the city is all pretty in pink 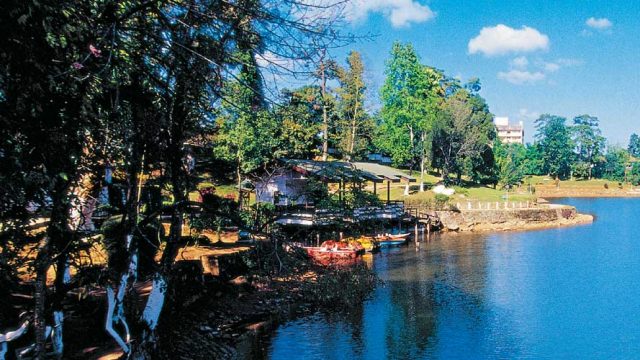 3 Places to Visit in Meghalaya