Home » Destinations » Hot Lists » Rajasthan: 10 Things to do in Ajmer and Pushkar

The Pushkar Camel Fair or Pushkar Mela, as it is locally known is an annual five day

camel and livestock fair held in the town of Pushkar between the months of October and November. It is one of the world’s largest camel fairs. Apart from the buying and selling of livestock, the fair is also an important tourism destination. This year it will be held from November 9 to November 18, culminating with the sacred full moon night of Kartik Purnima.

Nearby Ajmer, famous for the beautiful dargah of the Sufi saint Moinuddin Chisti, is another attractive destination which you can club with your visit to the Pushkar Fair. The two towns are separated by a ridge of the ancient Aravalli range, called the ‘Nag Pahar’. Here’s our handy guide of 10 things to do in the two holy cities.

Pushkar is one of the oldest towns in India. Situated at a height of 510 metres, Pushkar is surrounded by ridges of the Aravallis on three sides. Known as ‘the rose garden of Rajasthan’, the essence of the famous Pushkar rose is exported all over the world. Along with an interesting mythological history, a legacy of timeless architectural heritage makes Pushkar a fascinating city. According to myths, Lord Brahma, the creator of the universe, dropped a lotus which fell in Pushkar, creating its famous lake. As a result, Pushkar is home to the only temple dedicated to Lord Brahma, making it an important pilgrimage site for Hindus. The sacred Pushkar lake is often described as ‘Tirtha Raj’ or the king of all pilgrimage sites. No pilgrimage is considered to be complete without a dip in this lake. Semi-circular in shape and about 8-10 metres deep, the lake is surrounded by 52 bathing ghats and over 400 temples. Pushkar is home to many popular shrines, such as the Rangji Temple and Pap Mochini Temple.

BRAHMA TEMPLE
Nestled in the picturesque Pushkar valley beyond the Anasagar Lake, the Brahma temple is a special shrine as it’s the only temple in the world dedicated to Lord Brahma. Built with marble and decorated with silver coins, this temple can be identified by its red spire and the image of a swan, a bird considered sacred to Lord Brahma. The chaturmukhi (four-faced) idol is housed in the inner sanctum. A marble statue of the sun god stands sentinel at the gate of the temple. Interestingly, while all the gods are shown bare-footed, Surya is shown wearing ancient warrior’s boots.

VARAHA TEMPLE
Varaha temple is the largest and the oldest temple in Pushkar. Constructed by a 12th century chieftain, Anaji Chauhan, this temple is dedicated to the third incarnation of Lord Vishnu as a wild boar.

SAVITRI TEMPLE
Dedicated to Lord Brahma’s first wife, Goddess Savitri, this temple is situated atop a high ridge behind the Brahma temple. From the temple, you can get panoramic views of the lake, surrounding temples and the valley.

ATMATESHWAR TEMPLE
This beautiful 12th century temple is dedicated to Lord Shiva and has an underground shrine. The intricate Hemadpanti architectural carvings give this temple a magnificent appearance. Thousands of devotees flock here to pay their respects during the Shivratri.

MAN MAHAL
Built as a guest house of Raja Man Singh I, the Man Mahal is one of the greatest palaces of Pushkar. The palace’s traditional Rajasthani architecture makes it a visual treat. It has now been converted into a heritage hotel, called the RTDC Hotel Sarovar. The palace is a must-visit also for a breathtaking view of the lake and the many temples around it.

The city of Ajmer gets its name from ‘Ajay Meru’ or ‘the land of invincible hills’. Nestled in the Aravallis, Ajmer was founded by Raja Ajaypal Chauhan in the 7th century CE and served as the epicenter of the Chauhan dynasty till the 12th century. After Prithviraj Chauhan was defeated by Mohammed Ghori in 1193 AD, Ajmer became home to several successive dynasties. The Mughals, in particular, showered their patronage on Ajmer due to the presence of the holy Ajmer Sharif Dargah. One of the early meetings between Emperor Jahangir and the Ambassador of Queen Elizabeth, Sir Thomas Roe, took place here in 1616. Today, Ajmer is an important educational and cultural centre of Rajasthan. The city is home to the famous dargah of Moinuddin Chisti, the founder of the Chisti order of Sufism. Ajmer is also known for Mayo College, one of the first schools in the country to introduce British education.

AJMER SHARIF DARGAH
The Ajmer Sharif Dargah is considered to be among the holiest Muslim shrines in India. Khwaja Moinuddin Chisti, the Persian Sufi saint and founder of the Chisti order of Sufism, is enshrined here. In keeping with his teachings, the dargah’s doors are open to people of all faiths and religions. Some say that Khwaja Moinuddin believed he was a direct descendant of Muhammad and preached his beliefs to the masses. While on his travels, he was urged by Muhammad, in a dream, to visit India. He reached Ajmer, via Lahore, and made it his home from 1192 till his death in 1236 CE. The shrine was built by the Mughal Emperor Humayun in his honour. The path to the inner sanctum of the dargah runs through a series of massive silver doors. These lead to a courtyard where the saint’s tomb is located. Made of marble with gold plates adorning it, the tomb is guarded by a silver railing and a marble screen. During his reign, Emperor Akbar made a pilgrimage to Ajmer every year. He, as well as Emperor Shah Jahan, built mosques inside the shrine complex. Visitors to the shrine are awed by the atmosphere of peace and serenity that the combined effects of flowers, sweets and burning incense sticks create.

ADHAI DIN KA JHONPDA
The Adhai Din Ka Jhonpda is believed to be originally an educational institution which was converted into a mosque by Sultan Ghori in 1198 CE. An impressive blend of Indo-Islamic architecture, the structure was further beautified by Sultan Iltutmish in 1213 CE. Legend has it that the mosque is known as Adhai din ka Jhonpda  (literally meaning, The Hut of Two and a Half Days) because of a two-and-a-half-day fair held here during Urs in the 18th century.

ANASAGAR LAKE
Anasagar Lake is a scenic artificial lake, commissioned by the king Arnoraj Chauhan, son of Ajaypal Chauhan, between 1135 and 1150 CE. Arnoraj was also known as Anaji, which gives the lake its name. Many years later, the Mughal Emperor Jahangir renovated the lake and laid out the Daulat Bagh gardens near it. Emperor Shah Jahan too, contributed to its expansion by building five pavilions, known as the Baradari, between the garden and the lake.

SONIJI KI NASIYAN
Soniji ki Nasiyan, also known as the Ajmer Jain Temple, is a wonderful example of ornate Jain architecture, and is dedicated to the Jain Tirthankara Risabh or Adinath. Its entrance is made of red stone and the marble staircase inside is engraved with images of the holy Tirthankaras. Constructed in the late 19th century, this temple is counted among the richest in India. Its main chamber, Swarna Nagari (City of Gold), is aptly named so because of the several gold-plated wooden figures it houses within its walls.

AJMER GOVERNMENT MUSEUM
The Ajmer Government Museum is a prime tourist destination in Ajmer. The museum is housed within the magnificent fortified palace of the Mughal Emperor Akbar, built in 1570. The museum is also known as Bharatpur Museum and is home to a rich collection of archaeological artefacts. Along with stone sculptures, inscriptions and medieval arms and armour, it features some fine paintings of the erstwhile Maharajas of Bharatpur. 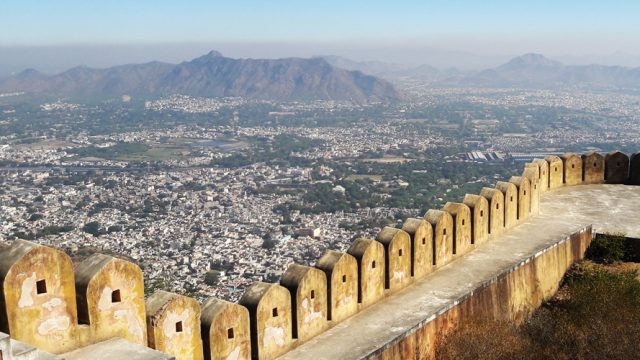 Rajasthan beyond palaces, desert and camels—as seen through the eyes of a traveller 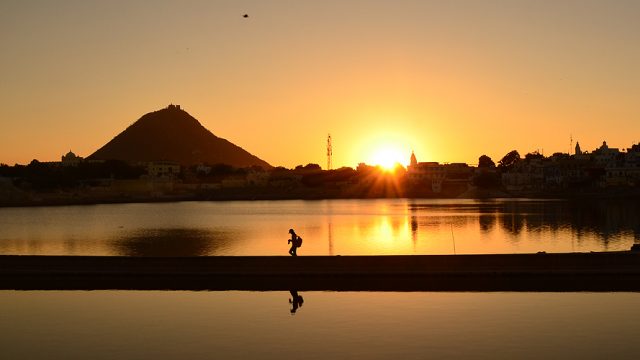 At The Sacred Pushkar festival, the ancient holy city comes to life with the best of music, meditation and sunset 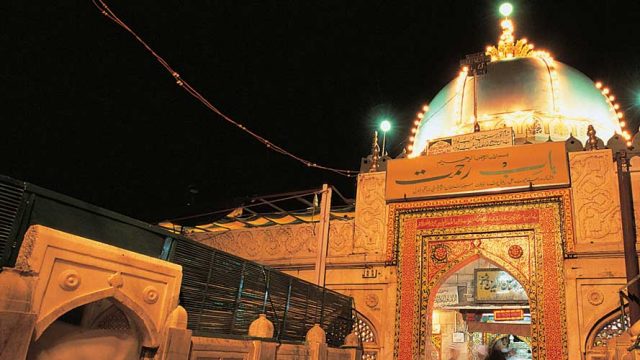 Ajmer: A Matter of Faith

Famed for the dargah of the Sufi saint Khwaja Moinuddin Chishti, Ajmer is a delight