retreat (with private apartments for his nine maharanis). Now, two centuries later, curator Peter Nagy has embellished it with sculptures that capture the indulgent, even erotic, domesticity of the past, giving birth to the Sculpture Park. Open to public since December 10, 2017, this collaborative project between the Government of Rajasthan and the NGO Saat Saath Arts lets the Jaipur palace double up as a space for contemporary arts, with 53 artworks by 24 top artists (15 Indian, 9 international). Some of the larger, more striking sculptures are found in the courtyard, including Subodh Gupta’s glimmering Doot (an aluminium-cast Ambassador, a car now out of production but still prominent as an icon), Huma Bhabha’s God of Some Things (a bronze-cast sentinel, depicted as strong, but sculpted to look disfigured, and representative of many cultures and eras), and Bharti Kher’s rich and poignant Choleric, Phlegmatic, Melancholy, Sanguine (four different female identities combined into one fantastic, defiant and self-reliant being). Inside, the palace is symmetrical but highly segmented and confusing to navigate, yet it evokes a sense of wonder and discovery. The artworks inside are relatively smaller, but in no way less magical. For instance, Prashant Pandey’s Peace (a moon-like stone disc made of discarded marble carvings from a stone mason’s workshop), Yellow (a cube made of vegetable refuse) and Woven Mirror (the cloak of a coffin made of worn-out clothes) reincarnate discarded materials as art. The Sculpture Park is an annual exhibition, so by November 2018, you will find a whole new set of artworks. Of course, that will also inspire a fresh narrative.
Admission: ₹50 (Indian), ₹200 (foreign national); open 10 am to 5.30 pm all days
Nahargarh Fort Sculpture Park Rajasthan Jaipur art Art Exhibition Subodh Gupta India travel updates travel news travelnews 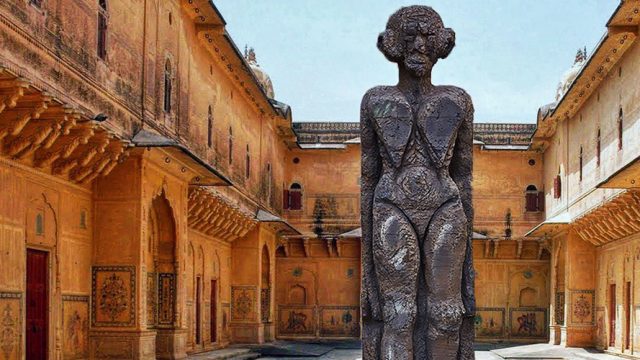 In a first-of-its-kind effort, Rajasthan govt. announces the launch of a contemporary art space within the Nahargarh Fort grounds