Kashmir in wintertime is not everyone’s cup of nun chai (salted tea). The verdant springtime mountainscape, as

seen in Yash Chopra’s Jab Tak Hai Jaan, is substituted by a murky, mist-covered setting akin to that of Vishal Bhardwaj’s Haider. It is not sunrise but the fajr (the first azan) that marks the beginning of each day; lotuses no longer bloom at Manasbal Lake; the chinars, willows and apple trees are stark naked. The palette is pastel.

But all you need to set things right is a snowfall.

“But will I get one?” I asked Ghulam Hassan Rah, over the phone. “Maybe,” responded the veteran adventurer, trekker and co-owner of The Villa Himalaya boutique hotel just outside Sonamarg. His response left me concerned—the snow was to be my protagonist.

Visiting in late January, I was going to spend my first day in Srinagar, where it was not expected to snow, and then continue to the hotel in Kullan village, which is 700m higher and eight degrees colder.

Upon arrival, my first stop was the Dal gate area, the beginning of Srinagar’s iconic downtown or Shehr-e-Khaas. Snowfall or not, this oldest, most politically active and, perhaps, most culturally rich part of town is quite spectacular. My companion, Shabir Ahmed, a relative of Rah, said, “Every season brings a different character to these streets. Just look around.”

A boy peeps out from Kullan village’s mosque

Pigeons pecked at corn at the Shah-e-Hamdan mosque’s courtyard. When the birdfeeder came, they flew away to momentarily perch on the roofs of the old towering houses. There were feathers everywhere, the birds seeming like daunting silhouettes against the grey sky from my worm’s-eye perspective. I left them alone and ambled along the main road. All around me were locals dressed in full-body woollen phirans. Some had mysteriously ballooned stomachs, as they held beneath their phirans baskets filled with burning coal, known as kangris, for warmth. Seasonal vendors sold dried vegetables and dried fish (hokhegad). These are made using centuries-old techniques that allow locals to preserve food even during the worst of Kashmir’s snowfalls, when supplies are scarce.

At the Shah-e-Hamdan graveyard, I saw a crow roost on a gravestone and then fly away into the horizon, as if delivering the soul of the departed to its maker. Next stop, Jamia Masjid, Kashmir’s biggest mosque. We strolled along the narrow downtown streets, among houses that looked, oddly, northern European. Behind them flowed the Jhelum, muddy and low-lying, but with mynas and sparrows milling around. Back in downtown Srinagar, busy Kashmiri bakeries or kaandurs  were running out of czot and chochwar breads. In contrast, Jamia Masjid, with its high-ceilinged halls and leafless chinars, was almost empty.

The Sind and its surroundings made for an ethereal sight

The winter expanse, as seen from The Villa Himalaya

I sat with Rah in my room, sipping Kashmir’s favourite green tea, kahwah, admiring the French windows beyond which lay a balcony with traditional Kashmiri stools and an alluring view of the adjoining river and the mountains. All that was great, but what about the snow?

“Let us hope for the best.”

Hope was all we had. We could theorise and postulate as much as we wanted, but the odds were against us. Perhaps that was what made the difference, for that night, at an hour unknown to me, it began to snow. My protagonist had arrived.

The Villa Himalaya in the evening

They say powder snow is the sweetest kind there is. That morning, the soft, cottony snowflakes made no sound as they fell. The compound to the right of The Villa Himalaya became an even, white field, with at least a foot of snow. The trees finally wore outfits; in the forest, they even formed tree wells. The Sind still gushed mightily, but the rocks by its banks looked like cotton candy. Around noon, when the snowfall stopped, I saw for the first time since landing in Srinagar, the sun and a blue sky.

Children sledding after a fresh spell of snow

Kullan village turned into a winter wonderland. About 300 homes skirt the river on both sides, all the way up the valley till the tree line. Once I stepped out, accompanied by the hotel’s operations manager, Khursheed Ahmed, I realised that the children had beaten me to it. A group of boys had found a flat piece of land and fashioned two lumps of snow into cricket stumps. A game ensued; most bowled balls rolled away, but when they bounced and the bat connected, they soared into the sky like the many ravens. A little ahead, the girls had gathered to play garam ball, a game beyond my comprehension. When it came to sledding, however, everyone was willing to play together. The snowfields, crisscrossed with a network of small footprints, had short slopes. Phiran-clad children rode their sleds in fours, and let gravity do the rest.

Mules, used to transport luggage in the summer, became playthings for children that day. The kids also ran around the ducks, and let the hens out of their coops. Just before the Kullan forest block, I even spotted a child attempting to ski using just sticks and a sliced pipe.

The Villa Himalaya, along with a local family, hosted a lunch for me at the latter’s house. Bashir, the patriarch, sat in a corner enjoying his shisha pipe, while his wife was by the bukhari, a wooden furnace, savouring the heat. As I awaited the meal, a helper came with a tasht-nari or a jug for washing hands. One by one, we were served dishes cooked with dried vegetables—wangan hachi (aubergine) chicken, al-hachi (bottle gourd) mutton and haak (saag) paneer. The rich flavours instantly reinvigorated my cold-numbed taste buds.

Khursheed and I decided to go on a snow forest trail. While the vir (willow), fraess’t (poplar) and kikkar kul (mesquite) down at the village were skeletal versions of their summer selves, the forest block lay lush with kail (Himalayan blue pine) and divdhor (deodar). Our trail began at the end of the path that ran beside the ridge.

Soon I learnt an important lesson: always wear proper snowshoes. At first, things were fine; then, we were shovelling through three feet of snow. Once it became too steep for me, I chose to give up. I was paralysed with fear, and Khursheed had to hold me all the way down till the ridge.

That evening, we celebrated the snowfall the Kashmiri way—by relishing wazwan, a multi-course, mostly non-vegetarian meal. Afterwards, we stepped out into the hotel’s courtyard, where the powder snow had turned into crunchy crud, and the starlight glittered upon its surface.

The next morning, Rah and I headed back to Srinagar. On the way, my host insisted that we take a detour and stop by Aslam’s Weaving Centre at the remote Narayan Bagh in Ganderbal district. Equipped with about two dozen handlooms that weave 100 per cent pashmina garments, it is run by four brothers, of whom the youngest, Zahoor, seemed the most passionate.

Harissa being tempered with desi ghee

They say, the best things are left for last. Despite the cold, a delicacy known as the harissa, only available in the winter, has Kashmiris leave their homes at 6am for one of the many harissa shops lining downtown Srinagar. Among them, the best one is only known by the name of the cook—Mohammad Ashraf Khaksar. He takes 50kg of mutton every day, mixes it with spices, and beats it for hours on end in a massive pot, till it has a fine, paste-like texture. Then he scoops out the cooked meat, tempers it with desi ghee, lays a kebab on top, and serves it with czot.

In that shop that day, accompanying my sumptuous meal, I had many pleasant conversations with the locals. Their geniality towards an outsider made me wonder about how the region is perceived elsewhere. Though I am in no way entitled to comment upon that, there is at least one thing I can say for sure—when it comes to the Kashmiris, the best thing that tackles the cold is their infectious warmth.

Getting There
Major carriers fly daily to Srinagar from all metros. The airport is 86km (2.5hr) from Kullan village, and from here you can take a taxi (approx. ₹3,000 one way). Note: the road to Sonamarg, 17km from Kullan, remains shut after the first December snowfall and reopens in March.

Where to Stay
The Villa Himalaya (+0124-4378037, +91-9266679310, thevillahimalaya.com) has some of the best service and facilities you will find in the area. It has15 rooms, including deluxe balcony rooms and attic rooms (₹7,250 doubles, taxes extra) and deluxe rooms (₹6,500 doubles, taxes extra). The hotel has a lovely log-house look, and the rooms include elements such as wooden Kashmiri artifacts, 100 per cent wool carpets, crewel embroidery bed covers and papier máché boxes containing fruit and biscuits. Tariff includes breakfast. In Srinagar, go for RK Sarovar Portico. Key facilities include: over 50 centrally-heated, comfortable rooms split across three categories, spa salon with a Turkish hamam, plenty of meeting and conference rooms, and a restaurant. From ₹5,900, taxes extra, sarovarhotels.com

What to Eat & Drink
At The Villa Himalaya, the head chef Harun Sheik, tandoori chef Naushad Khan and waza chef Mohammad Lateef together present some great food. I had their trout wazwan platter, which included gushtaba (meatballs in a yoghurt gravy), rista (meatballs in a red chilli gravy), kebabs, grilled chicken, salad and, of course, river trout (₹1,000, taxes extra). Lunch and dinner buffets cost ₹650 per person. The rogan josh (a lamb dish) is outstanding. For breakfasts, I enjoyed nun chai  and czot bread, along with sandwiches and omelette.

RK Sarovar Portico also does a fine wazwan. The nadru ki yakni (lotus stem in a yoghurt gravy) was delectable.

What to See & Do
Khursheed Ahmed (Ph: +91-9906736588) is in charge of all outdoor activities at The Villa Himalaya. Winter activities:
♦Village home meal: ₹3,000 for two, including lunch and a guide.
♦The snow forest trail: ₹1,000 for two, including a guide. It is about 1.5km long and takes a total of three hours. Check with Khursheed about appropriate winter gear. Note: you have to sign a disclaimer.
♦Heritage walk in Srinagar: ₹5,000 for two, including a wazwan lunch. It is conducted by Shabir Ahmed and takes about two hours.
♦Harissa at Mohammad Ashraf Khaksar’s shop in downtown Srinagar: ₹150 per plate, including czot.
♦A visit to Aslam’s Weaving Centre: ₹3,500 for two, including a guide and vehicle charges.
♦Shikara ride at the Dal Lake: ₹500 for four. The Villa Himalaya will provide you with blankets and kangris.
♦Kullan’s inhabitants offer sledding. There is no fixed rate, but ₹100 a ride is reasonable. 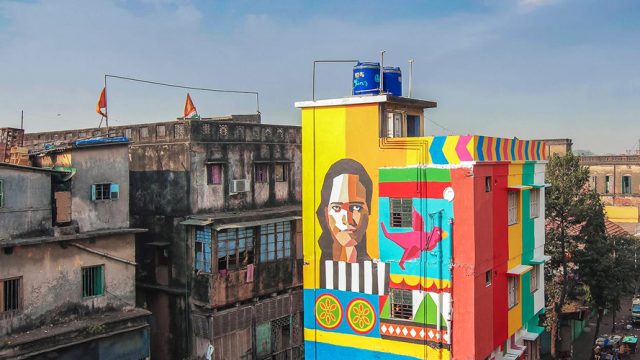 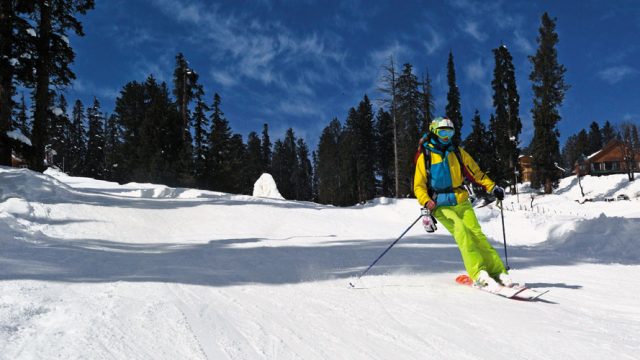 Gulmarg: On the Powder

A carpet of flowers in summer and an abode of powder snow in winter, Gulmarg is gorgeous