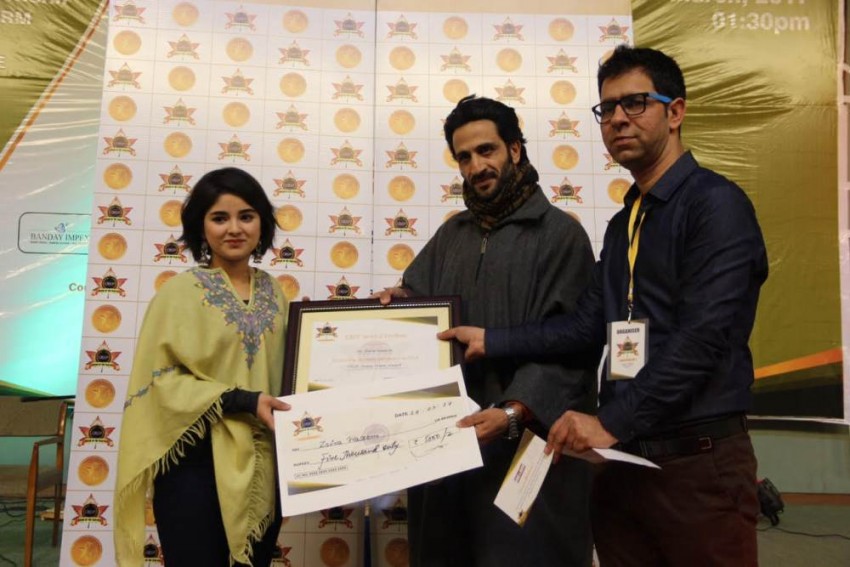 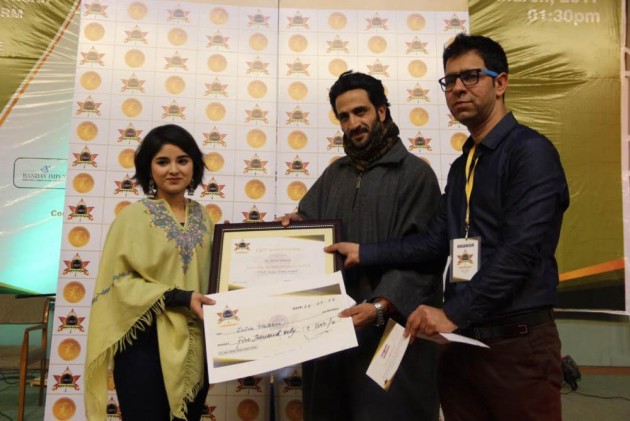 Scores of youngsters on Sunday lined up for taking selfies with 16-year-old actor Zaira Wasim of Dangal fame, whose apology note this year created media frenzy after she was criticized by a few of her friends and fans on social networking site, Facebook, for meeting Chief Minister, Mehbooba Mufti and for being an actor.

On the banks of Dal Lake, youngsters, jostled to greet Wasim and some even requested for an autograph, falsifying a media created image flashed a few months ago that Kashmir was hostile to this budding talent.

Kashmir based Centre for Research and Development Policy (CRDP) awarded the actor along with nineteen other achievers including a photojournalist, Zuhaib Maqbool. Maqbool was partially blinded after being hit by pellets fired by the government forces when he was covering a civilian protest at Rainawari Srinagar, during summer unrest of 2016.

A CRDP spokesman said the awardees were chosen through an elaborate process for the categories of Social Reform, Entrepreneurship, Healthcare, Research, Literature, Craft, Innovation, Art, Media, Music, and Sports.

The award was also given to Dr. Rashid Maqbool, an ophthalmologist for his work during the 2016 unrest and Ghulam Mohammad Sofi, an ambulance driver, who despite being hit by pellets drove wounded civilians to the hospital.

Wasim said she feels humbled for being selected for this award. “I am speechless, I can’t thank people enough for choosing me for this award” she said, while being handed over the award by another Kashmiri actor Mir Sarwar, who has also worked in several Bollywood films.

Zaira had tough time last year when after her apology note about her “recent meetings and actions” triggered a storm on national television news channels, which went berserk and brought the discourse into larger ambit of crime against gender and later linked it with Kashmir issue. Even the actor was shocked with the analogy.

After the release of Dangal the actor was freely moving with friends in Srinagar and people were greeting her for her role as the champion wrestler.

Following her meeting with the Chief Minister Mehbooba Mufti, on January 14, which was duly published by the state's information department, she was criticized on the Facebook.

Mufti had termed her as role model. However, soon after the meeting few of her Facebook friends and followers trolled the actor hailing from the old city Srinagar. The actor wrote an apology note after consulting her friends.

Mufti's government and party, Peoples Democratic Party (PDP) has come under intense condemnation as more than 80 civilians were killed, several hundred were visually impaired and thousands were injured in bullet and pellet firing of the government forces during the civilian protests, which broke out in the Valley after July 8 2016.