In an exclusive interview, the ace shooter says he has learnt from his mistakes in the 3 Olympics he has been to before Rio 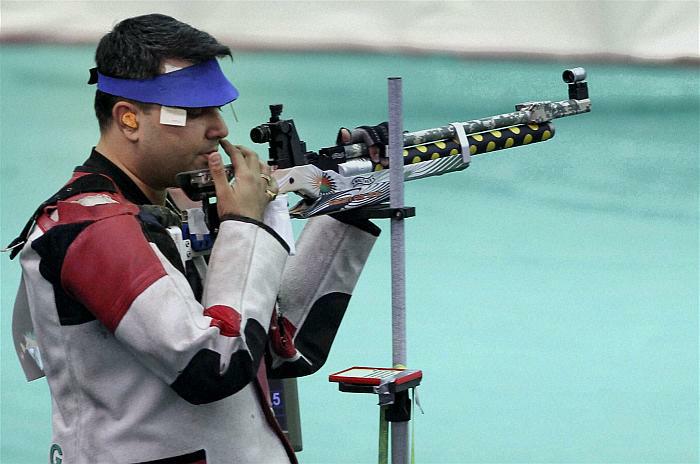 Ace shooter Gagan Narang was the first Indian to qualify for the 2012 London Olympics where he won the bronze medal at the 10-metre air rifle. In the finals, he shot the same score as the gold medal winner (103.1 points) but he slipped to the third position in the overall tally, which included points accumulated in the qualification round.

Nevertheless, it was India’s account opening medal in London and the country went on to win five more medals — its best tally in Olympic history.

Narang finished ninth in the 10m air rifle event at the 2008 Beijing Olympics, narrowly missing the final only on a countback, after having scored 595/600 points in the qualification round. In Beijing 2008, he finished 13th in the 50m rifle 3 position with a score of 1167/1200, missing the final by three points.

For Narang, 33, Rio will be his fourth Olympics. He is now more experienced and will be competing in three events—10m air rifle, 50m rifle prone, and 50m rifle three-position. There are expectations of a medal(s) from the Hyderabad-based shooter. It is perhaps, in a way, an advantage for Narang that he has been preparing without getting much media attention in the run-up to the Olympics, for that has enabled him to concentrate on his job. On the other hand, the focus has been on his well-known competitor Abhinav Bindra. Narang admits “comparisons are bound to happen” when he competes with Bindra.

Apart from aiming with his Walther rifle —  a brand that James Bond uses and which has intrigued the Indian since childhood— Narang is also an ace photographer. He loves gadgets, including his camera, and has published coffee table book on his photographic work, ‘Commonwealth Journey from Melbourne to New Delhi’. He attempts to live up to the Hyderabadi tahzeeb and comes across as a pleasant personality.

Narang has got both the top sports prizes of India— Rajiv Gandhi Khel Ratna and Arjuna Award – besides being conferred the Padma Shri.

Here, Narang discusses a wide range of issues in an Exclusive Interview with Outlook:

When exactly did your real preparation start for the 2016 Olympics?

Actually, it started with the 2014 Commonwealth Games in Glasgow. I flopped in air rifle because I was still recovering from my injury but I was able to grab two medals in prone and three-position. That really kick-started the preparations for the Rio Games.

Since you were battling injuries, was there added pressure to qualify, before you actually qualified by winning the 50-metre rifle prone bronze medal at the World Cup in Fort Benning in May?

Unlike the other times, I did not qualify in the first quota event by one place. In the last World Championship, the sixth place shooter had qualified. This World Championships, I was sixth but five qualified, and it did take me time. I was quietly confident that my time will come. I had to just keep my head down and do the process right. I have a fabulous team working with me and I have immense faith in them.

What are your own realistic expectations from yourself in the 50m rifle prone event, in which you won the quota place this month?

Everyone expects to win a medal going into the Olympic Games. All I can say is that I will give my best.

With an experience of three Olympics under your belt, do you see yourself performing better than ever in Rio?

I would imagine so. Now I can dig deep into my experience. But, you see, there have been a lot of changes in the rules and the game has advanced too. We have kept pace with it. The man and the machine (my gun and ammunition) have to be in sync. We have tried our best to eliminate uncertainties. However, there will be external factors like the weather and many little logistical issues. But I am hoping to return with better scores and a better medal from Rio.

The 2012 London Olympics have to be your best Games of the three you have been to simply because of the bronze you won there in 10 metre air rifle.

London is history now and I don’t like to dwell on past performances — and you are only as good as your last competition, they say.

How many days before your competition did you reach London and how long did you take to completely settle down there?

I reached London a week before the Olympic Games in 2012. I still remember the morning sun filter through the London Eye as we adjusted our vision to the bursting, glitzy, fabulous and scenic London. I had not seen much of London before that, though I had gone past the city during my several trips to Europe. So, there was a sense of occasion, coupled with anticipation. Every second mattered. On the one hand I was in the city of (James) Bond that has intrigued me since my childhood, on the other hand it was the time to deliver the goods. Things fell in place soon. And the presence of my mental trainer, Vaibhav Agashe, helped to calm the nerves. We had shot a pre-Olympic World Cup before that in London, so nothing at the range was new.

Were you happy with the equipment that you were carrying with you and whether you had to buy some in London, or get it repaired etc?

I had prepared very meticulously ahead of the London Olympics, to the extent I weighed each pellet. I was very happy with all the equipment I carried to London.

Since you had competed at two Olympics before the 2012 Games, how helpful was that experience? Did the experience help in calming down your nerves as you went into competition in London?

There is always a sense of occasion when you go into a showpiece event like the Olympic Games. Yes, I was much better prepared than the previous two times. I had a well mapped route. I knew if I did the process right, results were bound to come. I had put in the right amount of training for the London Games. So I was confident of cracking the test.

Please recall in detail the 10 metre air rifle competition, which had shooters like Romanian Alin Moldoveanu (he won gold), Niccolò Campriani of Italy (silver), Wang Tao of China (4th), and Abhinav Bindra (16th). Apart from them, was there anyone else who gave a tough competition to you?

The fight is within you and in the finals, you are your own opponent. You need to shoot as good as possible; other persons’ performance is not in your control, so there were no opponents. But during the final, things didn’t go the way I wanted to when I was being aggressive. So, I quickly changed gear and salvaged what I could, keen to shoot better than the Chinese and ended up with the bronze.

You also performed well at the 2008 Olympics and were unlucky to miss out on qualifying for the 10 metre air rifle finals by a whisker. Please recall that competition (which included Abhinav) as well as your emotions and tribulations after missing out on the finals.

Muhammad Ali said, “Only a man who knows what it is like to be defeated can reach down to the bottom of his soul and come up with the extra ounce of power it takes to win when the match is even.” Looking back, I feel the Beijing low shaped me into the man, the shooter I became in the later years. I learnt to handle defeats with as much grace as victory. And every time there was a challenge, I dug into my experience to chart the road ahead. Yes, Beijing was an emotional moment. I was 25, yet to be cut, grinded and edges sharpened. Now, I know everything happens for a reason. London happened because Beijing didn’t.

Since Bindra also competed in this event, was there some additional pressure on you especially as he had already clinched the gold four years earlier in Beijing?

I am asked this question often and the comparisons are bound to happen. But let me tell you, shooting is very individualistic. You are your biggest friend and biggest enemy on the field. There is not a chance to get bogged down by what the others are doing. If you hit a 10.9 (points), the rest will be taken care of. If your gun/ammunition/mind/muscle malfunctions, twitches or you shake or you hit a 9 then you are to pay for that. Shooting is never a one-on-one competition. You either stay in the game or knock yourself out completely.

Did Bindra competing along with you in the 2008 and 2012 Olympics propel you to be more competitive?

Abhinav's achievement is unique. He is the first Indian to win an Olympic gold. No one will ever match that. But, of course, everyone like me would want to change the colour of our medal as we go into Rio. The yellow metal is what we yearn for. And Abhinav has set standards for all of us.

What all did you do as part of celebrations after winning the bronze in London?

I had no time after I won the medal because I had to immediately prepare for my three-position and prone events. Though there was a huge monkey off my back, I knew there was a task at hand. However, there was a celebration of sorts with the media contingent and my own team. Besides, that evening congratulatory messages poured in and I was very touched by a friend sending me a grab of the Amul advert that said: 'Door Gagan ke chaon mein'. I thought that was the cutest tribute.

Please describe the pressure of the London Olympics competition, particularly as you had not won a medal at the 2004 and 2008 Games. Was it that you felt it was a ‘now-or-never’ situation? Am sure all kinds of thoughts, including many negative ones, would have crossed your mind.

Yes, there were a plethora of thoughts going into the Games. I was a shooter in my prime and there were lots of hopes pinned on me. Olympic Gold Quest had invested five years in me, to help me get to where I was. And then there were a lot of people who doubted my abilities saying that I had turned into a businessman by opening ‘Gun For Glory’ [shooting academy in Pune] which actually is a not-for-profit academy. So, I needed to prove to them, and above all to myself, that it was in me to win it. Hence the win was hugely satisfying.

How was your stay at the London Games Village and interaction with fellow Indian athletes? With whom did you spend most time?

The Games Village was very nice and comfortable. Everyone has their own schedules and routines, so we generally tend to stay out of each others’ space as focus is of key importance.

Did you go to watch and support any other event where Indians were competing in 2012 Games?

No, I did not have the time to watch any other Indian athlete but I did watch Usain Bolt win the 100m race in the Olympic Village Sport Viewing Centre. That was quite an experience. It was a goosebumps moment when he finally crossed the line and the entire stadium broke into raptures.