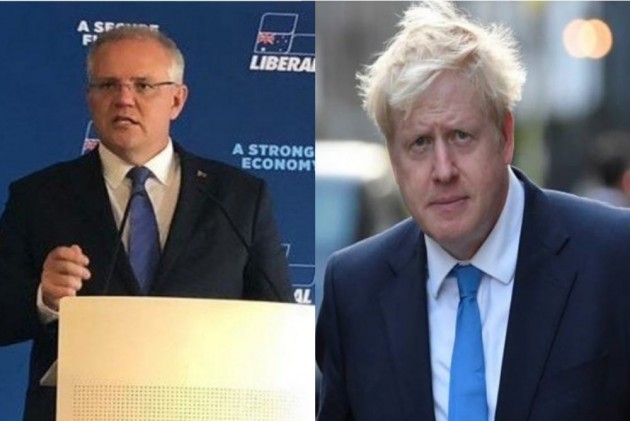 As India celebrated Republic Day on Tuesday, leaders from across the globe extended their wishes and congratulated India on successfully completing 72 years as a sovereign, Republic.

Australian Prime Minister Scott Morrison was one of the first world leaders to extend his greetings on the occasion. Taking to Twitter, he highlighted the strong bond shared between Australia and India. Interestingly, folks in Down Under, celebrate Australia Day today.

“Of course India and Australia share more than our national day. We pursue the same ideals like democracy,  freedom, liberty and diversity.  And we continue to nurture deep people-to-people ties,” Morrison said through a video message shared on Twitter.

ðÂÂÂÂÂÂÂÂ¦ðÂÂÂÂÂÂÂÂºðÂÂÂÂÂÂÂÂ®ðÂÂÂÂÂÂÂÂ³ are closer than we have ever been. While we celebrate our nation on #AustraliaDay today, I also extend my best wishes to my good friend @narendramodi & all Indians on #RepublicDay. à¤ÂÂÂÂà¤£à¤¤à¤ÂÂÂÂà¤¤à¥ÂÂÂÂà¤° à¤¦à¤¿à¤µà¤¸ à¤ÂÂÂÂà¥ÂÂÂÂ à¤¶à¥ÂÂÂÂà¤­à¤ÂÂÂÂà¤¾à¤®à¤¨à¤¾à¤ÂÂÂÂà¤ÂÂÂÂ| #dosti pic.twitter.com/53trQwNfP5

Speaking about the challenges faced by both nations in their fight against Covid-19, Morrison said, "The global pandemic has not divided us but has made us appreciate these shared ideals even more. And even though the pandemic has limited people’s travel between the two countries…I assure that we will welcome more of our Indian friends, family and students in the future."

He also emphasised the bilateral ties shared between the two countries. "Six months ago, my good friend Prime Minister Modi and I signed a comprehensive strategic partnership. It signifies a major step forward (with regards to bilateral) trade, investment, defence and scientific partnerships,” the Australian PM said.

"Today we celebrate our country and we send our best wishes to one of our truest friends.
Happy Australia Day and Sab logo ko Happy Republic Day, " he added.

UK Prime Minister Boris Johnson also extended his heartfelt wishes to India and he reiterated his plan to visit the country in the coming months.

“I was hugely looking forward to joining you for this important occasion at the kind invitation of my friend Prime Minister Modi but alas our common struggle against Covid has kept me in London,” said Johnson.

“As I speak, our two countries are working side by side to develop, produce and distribute vaccines that will help to free humanity from the pandemic. And thanks to the combined efforts of Britain, India and many other nations, we are on the road to success against Covid. So, I look forward to visiting India later this year, strengthening our friendship, and striving for the quantum leap in our relationship that Prime Minister Modi and I have both pledged to achieve,” he said.

"I look forward to visiting India later this year, strengthening our friendship, and striving for the quantum leap in our relationship that Prime Minister @narendramodi and I have both pledged to achieve".

Addressing the Indian diaspora in the UK, he added, “All over the world, this virus is compelling people to stay apart, including family and friends in Britain and India, who form what Prime Minister Modi has called the ‘living bridge’ between us. But for now, let me wish everyone in India as well as those celebrating here in Britain, a very happy Republic Day.”

"To my great friend Prime Minister @NarendraModi - Congratulations to you and the people of India on your 72nd #RepublicDay. Our friendship grows from year to year," Netanyahu tweeted, along with a photograph of Modi and himself, and the emoticons of handshake and the Indian, Israeli flags.

To my great friend Prime Minister @NarendraModi - Congratulations to you and the people of India on your 72nd #RepublicDay . Our friendship grows from year to year. ð®ð±ð¤ð®ð³ pic.twitter.com/A3JGTZ7DzO