'Where Is God?': Sri Lankans Stunned After Deadly Blasts

At least 290 people have died in the serial blasts in Colombo that ripped through three churches during Easter services on Sunday. 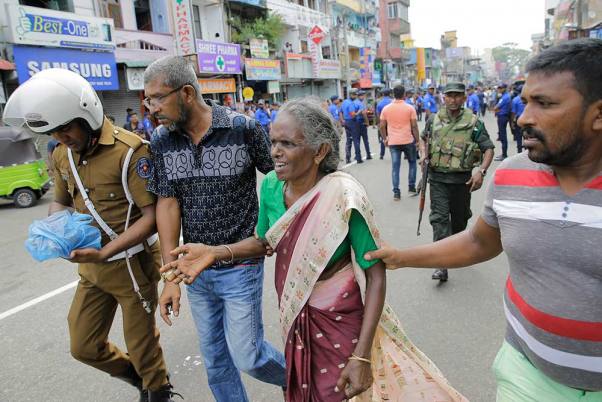 "I carried about eight wounded children yesterday," he told AFP on Monday, a day after a string of blasts hit hotels and churches, killing nearly 300 people.

"There were two girls aged six and eight, the same age as my daughters," said Prasad, who helps carry stretchers into the hospital's triage area and wards.

"Their clothes were torn and drenched in blood. It is unbearable to see this kind of violence again." For many Sri Lankans, Sunday's attacks against churches and high-end hotels brought back painful memories of a conflict that lasted three decades and killed as many as 100,000 people.

During those years, bomb attacks were a regular occurrence, and left many Sri Lankans on edge in the streets and on public transport.

In the capital, street sweeper Malathi Wickrama said Monday he was now nervous doing his job.

"Now we are afraid to even touch black plastic bags with garbage," he said.

"The string of blasts yesterday brings back memories of the time when we were afraid to go in buses or trains because of parcel bombs."

With the lifting of a nationwide curfew early Monday morning, people began to emerge into Colombo's streets, where security was heavy.

Schools and the stock exchange are closed, but some shops opened their doors and public transport was functioning.

Imtiaz Ali, a tuk-tuk driver, was looking for customers in the capital, but said his family was in mourning over the death of his nephew in the blast that hit the Cinnamon Grand hotel.

"The boy was just 23. He was a salesman at Cinnamon Grand hotel and he was to be married next week," Ali told AFP.

"We had made all the plans to hold the wedding at home, but today it's a funeral house." When Ali stopped at a petrol station to get a back-up container of fuel, the attendant said police had banned the sale of petrol and diesel in cans and bottles for fear they could be used to improvise bombs.

Elsewhere in the city, some residents were making their way into work, determined to maintain a semblance of normality despite the tragedy.

"We have seen so much violence during the civil war. For the outside world it may be big, but for us life goes on," he added.

"We have to gather ourselves and move on."

North of Colombo, people gathered at the St Sebastian's church to pay their respects at a site where dozens of people were killed as they attended Easter prayers.

A mother and son poured tea for security forces in a show of support, as cleaners wearing face masks cleared shattered glass and splintered wood inside the church.

"I woke up this morning and thought 'what can I do to help?'" said Churchill Karunaratne, 52, weeping as he laid flowers outside the church.

He had rushed to the church after the blast a day earlier hoping to help and found scenes of horror.

"I came after the blast and saw dead bodies everywhere," said Karunaratne, a father-of-three.

"My kids have seen it all on the TV and now they are very scared about going to church," he added.

"They are asking many questions such as 'where is God?'