The new Act authorises the US State Department to establish an annual educational forum for scholars from both India and the US that focuses on the legacies of Mahatma Gandhi and Martin Luther King Jr. 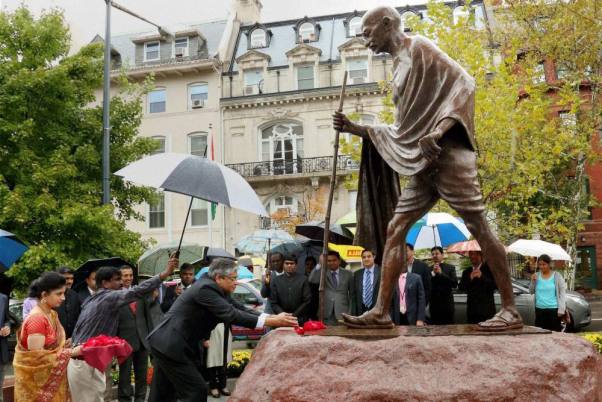 Cosponsored by Indian-American Congressman Ami Bera, the Gandhi-King Exchange Act was passed by the House Foreign Affairs Committee. The bill would establish an exchange initiative between the United States and India to study the work and legacies of Mahatma Gandhi and Martin Luther King Jr.

"John Lewis was a civil rights hero not only in the United States, but across the globe. John fought for human rights, equality and justice, and democracy for all. Just like Gandhi and Dr. King, Congressman Lewis shaped the world through his actions of nonviolence, and his life story will reverberate throughout history," Bera said.

The Act authorises the US State Department, in cooperation with the Indian government, to establish an annual educational forum for scholars from both countries that focuses on the legacies of Mohandas Karamchand Gandhi and Martin Luther King Jr.

It also seeks to develop a professional development training initiative on conflict resolution based on the principles of nonviolence; and establish a foundation to address social, environmental, and health priorities in India.

In 2009, Congressman John Lewis led a Congressional delegation visit to India to commemorate the 50th anniversary of Dr King's pilgrimage to India.

Inspired by his visit, Congressman Lewis created the Gandhi-King Exchange Act to seek to apply the philosophies of Gandhi and Dr King Jr to conflict resolution efforts and current policy challenges.

"The Gandhi-King Scholarly Exchange Initiative Act is a fitting tribute to his incredible legacy," said Bera, who is the longest serving Indian-American member of the Congress in history.

"As the world's oldest and largest democracies, the US and India have long traditions of upholding these shared values championed by figures like Gandhi, King, and Congressman Lewis. But they are increasingly under threat in both countries," he said.

"This legislation will help ensure those values endure and remind us that by holding true to them, we embody and live up to the best of our two nations," Bera said.

Noting that Gandhi and Dr King Jr were dedicated leaders fighting for social justice and social change, peace, and civil rights in their respective communities, and countries and in the world, the Bill said the use of non-violent civil disobedience is a shared tactic that has played a key role in defeating social injustice in India, the US, and in other parts of the world.

The bill, among other things, asks the administrator of the US Agency for International Development (USAID) to establish in cooperation with the Indian government the United States-India Gandhi-King Development Foundation.

The foundation shall identify development priorities and administer and oversee competitively awarded grants to private nongovernmental entities to address such priorities in India, including health initiatives addressing tuberculosis (TB), water, sanitation, and health (WASH), and pollution and related health impacts (PHI); pollution and climate change; education; and empowerment of women.

It asks the president and chief executive officer of the United States Institute of Peace to develop a training initiative known as the Gandhi-King Global Academy. It will target representatives from governments, nongovernmental organizations, civic organizations, and educational, cultural, women's, civil, and human rights groups, including religious and ethnic minorities and marginalized communities in countries with ongoing political, social, ethnic, or violent conflict.

Asserting that Dr King Jr's effective use of Gandhi's principles was instrumental to the American civil rights movement, the bill says that there is a long history of civil and social rights movements in the United States and in India.

"As the relationship between the United States and India evolves, a binational foundation through which the governments of each country can work together and catalyze private investment toward development objectives would provide an ongoing, productive institution and symbol of the friendship and common ideals of the respective governments and their peoples," it said.

John Lewis died on July 17 at the age of 80 and was a contemporary of fellow civil rights leader Dr Martin Luther King Jr.