The UNHRC on Tuesday adopted a resolution titled ‘Promotion of Reconciliation Accountability and Human Rights in Sri Lanka’. As many as 22 nations voted in favour of the resolution. 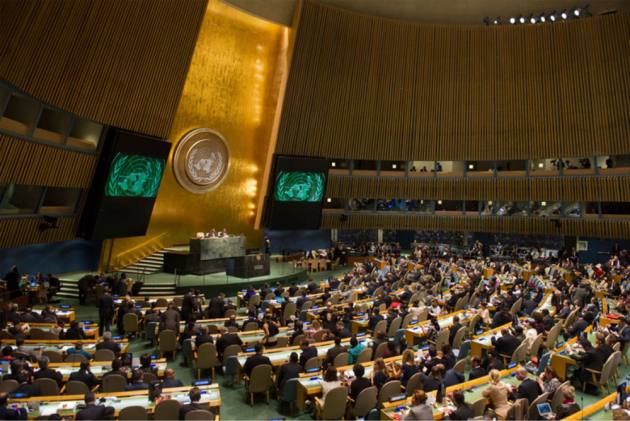 The United Nations Human Rights Council (UNHRC) on Tuesday adopted a resolution titled ‘Promotion of Reconciliation Accountability and Human Rights in Sri Lanka’ after 22 members out of 47-member Council voted in favour of it.

While India abstained from voting it urged Colombo to fulfil its commitments on the devolution of political authority, to carry forward the process of reconciliation and address the aspirations of the Tamil community in the island nation.

The UK, Canada, Germany and eight other member nations voted against the resolution. Apart from India, 13 other nations abstained from voting.

Ahead of the voting, India said that as an immediate neighbour, it has contributed to the relief, resettlement, rehabilitation and reconstruction process in Sri Lanka after 2009.

India's approach to the question of human rights in Sri Lanka is guided by two fundamental considerations, Pawankumar Badhe, First Secretary, Permanent Mission of India in Geneva said in a statement.

"One is our support to the Tamils of Sri Lanka for equality, justice, dignity and peace. The other is in ensuring the unity, stability and territorial integrity of Sri Lanka.

"We have always believed that these two goals are mutually supportive and Sri Lanka’s progress is best assured by simultaneously addressing both objectives," Badhe said.

"We would urge that the Government of Sri Lanka to carry forward the process of reconciliation, address the aspirations of the Tamil community and continue to engage constructively with the international community to ensure that the fundamental freedoms and human rights of all its citizens are fully protected," he said.

He said India supports the call by the international community for the Government of Sri Lanka to fulfill its commitments on the devolution of political authority, including through the early holding of elections for Provincial Councils and to ensure that all Provincial Councils are able to operate effectively, in accordance with the 13th Amendment to the Sri Lankan Constitution.

The 13th Amendment provides for devolution of power to the Tamil community. India has been pressing Sri Lanka to implement the 13th amendment which was brought in after the Indo-Sri Lankan agreement of 1987.

The Sinhala majority hardliners of the ruling Sri Lanka People's Party have been advocating a total abolition of the island’s provincial council system established in 1987.

At the same time, Badhe said, India believes that the work of Office of the Human Office of the United Nations High Commissioner for Human Rights (OHCHR) should be in conformity with mandate given by the relevant resolutions of the UN General Assembly.

Ahead of elections in Tamil Nadu next month, major political parties in the state had urged the Indian government to take a stand against Sri Lanka in the UNHRC session vis-a-vis the accountability and reconciliation resolution.

Jaishankar had met the Tamil leadership and discussed issues pertaining to the development and devolution and the role of provincial councils as part of national reconciliation.

"As we promote peace and well-being in the region, India has been strongly committed to the unity, stability and territorial integrity of Sri Lanka. Our support for the reconciliation process in Sri Lanka is longstanding, as indeed for an inclusive political outlook that encourages ethnic harmony," he said during a joint media interaction with his counterpart Dinesh Gunawardena in Colombo.

"It is in Sri Lanka’s own interest that the expectations of the Tamil people for equality, justice, peace and dignity within a united Sri Lanka are fulfilled. That applies equally to the commitments made by the Sri Lankan government on meaningful devolution, including the 13th Amendment to the Constitution," Jaishankar had said.

According to the Lankan government figures, over 20,000 people are missing due to various conflicts including the three-decade brutal war with Lankan Tamils in the north and east which claimed at least 100,000 lives.

The Tamils alleged that thousands were massacred during the final stages of the war that ended in 2009 when the government forces killed Liberation Tigers of Tamil Eelam (LTTE) chief Velupillai Prabhakaran.

The Sri Lankan Army denies the charge, claiming it as a humanitarian operation to rid the Tamils of LTTE''s control.

At the end of the civil war, the United Nations accused both sides of atrocities, especially during the conflict's final stages.

International rights groups claim at least 40,000 ethnic Tamil civilians were killed in the final stages of the war, but the Sri Lankan government has disputed the figures.