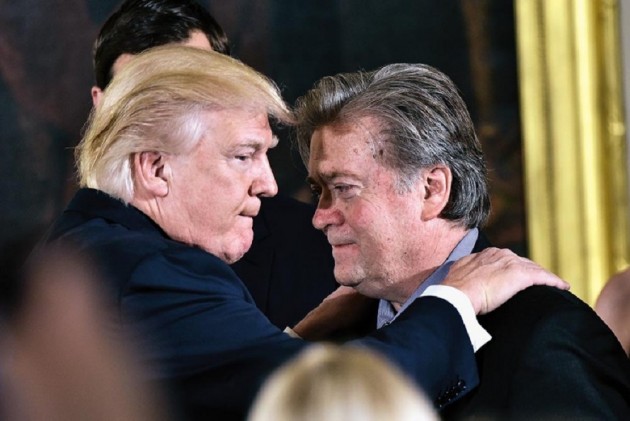 US President Donald Trump's former top aide Stephen Bannon was arrested on Thursday and charged for his role in defrauding thousands of donors in connection with an online crowdfunding campaign known as ‘We Build the Wall’ that raised more than $25 million.

Bannon, 66, was charged in an indictment along with Brian Kolfage, 38, an Air Force veteran from Florida, Andrew Badolato, 56, a financier also from Florida and Timothy Shea, 49, of Colorado, Acting United States Attorney for the Southern District of New York Audrey Strauss said on Thursday.

The men were arrested on Thursday morning and Bannon will be presented in the Southern District of New York, while others will make their court appearance in their jurisdictions.

"As alleged, the defendants defrauded hundreds of thousands of donors, capitalizing on their interest in funding a border wall to raise millions of dollars, under the false pretense that all of that money would be spent on construction,” Strauss said.

It was assured to donors that Kolfage, the founder and public face of ‘We Build the Wall’, would not be paid a cent but the defendants secretly schemed to pass hundreds of thousands of dollars to him, which he used to fund his lavish lifestyle, he added.

Commenting on the development, President Trump said he feels "very badly" about the arrest of Bannon on wire fraud charges but distanced himself from his former strategist and the project that led to the alleged crimes.

"Don't know anything about the project at all. It's a very sad thing by Bannon. I don't like that project...," he added.

Inspector-in-Charge Philip R. Bartlett said the defendants allegedly engaged in fraud when they misrepresented the true use of donated funds.

"As alleged, not only did they lie to donors, they schemed to hide their misappropriation of funds by creating sham invoices and accounts to launder donations and cover up their crimes, showing no regard for the law or the truth. This case should serve as a warning to other fraudsters that no one is above the law, not even a disabled war veteran or a millionaire political strategist."

White House Press Secretary Kayleigh McEnany said President Trump has no involvement in this project and felt it was only being done in order to showboat, and perhaps raise funds.

"President Trump has always felt the Wall must be a government project and that it is far too big and complex to be handled privately. The Trump Administration has already built over 300 miles of Border Wall, thanks to the great work of our Army Corps of Engineers, and will have almost 500 miles completed by the end of the year. Our southern border is more secure than it has ever been.

"President Trump has not been involved with Steve Bannon since the campaign and the early part of the Administration, and he does not know the people involved with this project," McEnany added.

According to the Indictment unsealed in a Manhattan federal court Thursday, Bannon and three others orchestrated a scheme to defraud hundreds of thousands of donors, including donors in the Southern District of New York, in connection with an online crowdfunding campaign ultimately known as “We Build The Wall” that raised more than USD 25 million to build a wall along the southern border of the United States.

In particular, to induce donors to donate to the campaign, Kolfage repeatedly and falsely assured the public that he would “not take a penny in salary or compensation” and that “100 percent of the funds raised...will be used in the execution of our mission and purpose” because, as Bannon publicly stated, “we’re a volunteer organization."

Prosecutors said those representations were false because the men received hundreds of thousands of dollars in donor funds from the online campaign, which they each used in a manner inconsistent with the organization’s public representations.

Kolfage covertly took for his personal use more than USD 350,000 in funds that donors had given to the campaign while Bannon, through a non-profit organization under his control received over USD 1 million from We Build the Wall. Bannon used part of the amount to cover hundreds of thousands of dollars in his personal expenses.

In order to conceal the payments to Kolfage from We Build the Wall, the men devised a scheme to route those payments from the campaign to Kolfage indirectly through the non-profit under Bannon’s control and a shell company under Shea’s control, among other avenues.

Prosecutors said they did so by using fake invoices and sham “vendor” arrangements, among other ways, to ensure, as Kolfage noted in a text message to Badolato, that his pay arrangement remained “confidential” and kept on a “need to know” basis.