The country has faced months of severe fuel shortages that have prompted long lines at gas stations and plunged the small country, dependent on private generators for power, into long hours of darkness. 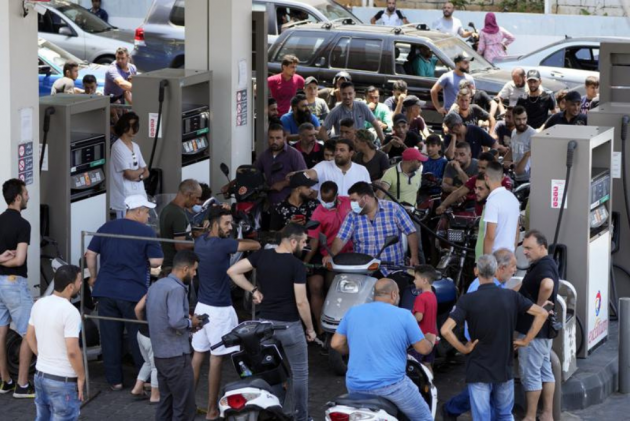 Tensions over scarce fuel supplies in Lebanon descended into deadly violence on Monday — including knives, guns and a hand grenade — that killed three men, the country's news agency reported.

Lebanon has faced months of severe fuel shortages that have prompted long lines at gas stations and plunged the small country, dependent on private generators for power, into long hours of darkness.

The shortages are blamed on smuggling, hoarding and the cash-strapped government's inability to secure deliveries of imported fuel. The crisis worsened when the government reduced subsidies on fuel amid a deepening financial crisis unfolding since 2019.

The Lebanese currency has plummeted and now sells at 20,000 Lebanese pounds to the dollar on the black market while the official rate is fixed at 1,500 pounds for USD 1. The price of a gallon of fuel has increased by more than 220 per cent in the last year, triggering panic and a thriving black market.

The fuel crisis has turned violent before, with motorists clashing at gas stations after long waits and fuel running out. But Monday's deaths reflect growing frustration over a continued problem that has only gotten worse.

The National News Agency said that in one incident, a gunfight erupted over a deal about a fuel sale, apparently following a disagreement and leaving two men dead. The violence started in the area of Badawi and extended to Bab al-Tibenneh in the northern city of Tripoli, it reported. Details of the disagreement were not immediately clear, but the agency said the men exchanged fire and at one point, a hand grenade was thrown.

Troops fanned out, deploying around the local hospital. There was heavy gunfire in the air during the men's funeral. The person responsible for their killing handed himself in, local media reported.

The other clash started with a fistfight at a gas station in Bakhoun, a village in the northern Dinniyeh region. A man was shot in the melee; he was taken to a hospital in the nearby town of Zgharta where he died of his wounds, the agency said. The shooter handed himself in to authorities.

“The situation is very hard, and we can't handle it much longer,” Fadi Abu Shakra, a spokesman for fuel distributors, told Al-Jadeed TV, a local station.

Lebanon's national electricity company, dependent on imported fuel, has expanded a rolling blackout system, delivering only around one hour of electricity a day to homes and businesses.

This prompted private generator operators to turn off their engines to ration the consumption of fuel, plunging entire areas into hours-long darkness. Hospitals have warned that they have been unable to secure diesel, threatening the already struggling health sector with shutdowns of medical facilities. (AP)